Hamburg rewind: What you got right & wrong

Think you know how the next fight card will play out? Play UFC Pick 'Em
Two UFC legends went to battle on Saturday, with Josh Barnett becoming the first fighter in history to submit Andrei Arlovski after a three-round war between the pair of former heavyweight champions.

Barnett and Arlovski both exchanged knockdowns in the opening round before they each settled into a rhythm during the first five minutes in the Octagon. Arlovski looked powerful early, but his gas tank seemed to deplete after going for an early finish, and Barnett took full advantage.

In the third round, with Arlovski breathing heavy, Barnett took the fight to the ground and wrapped up a rear naked choke submission to give him the win. Going into the main event, only 39 percent of fantasy players picked Barnett to get the victory, although 42 percent did select him to win by submission. Barnett is now 3-2 since returning to the UFC in 2013. 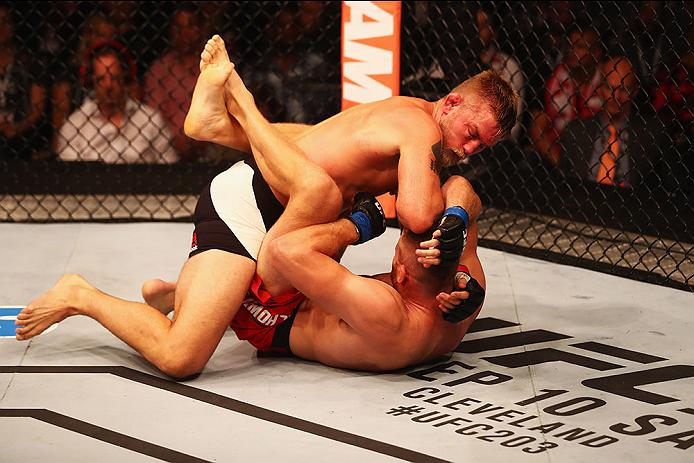 In the co-main event, Alexander Gustafsson had to stave off an early striking attack from Jan Blachowicz to power through a three-round decision in his first fight since last October. Gustafsson used his potent ground-and-pound game to punish Blachowicz repeatedly to earn the win after being the heaviest favorite on the entire card.

A whopping 93 percent of players picked Gustafsson to win and he did his job with a victory over Blachowicz.

Ryan Bader also walked into his fight with Ilir Latifi as a solid favorite, with 65 percent of players picking him to win. Bader came through with flying colors, although 65 percent said he would win by decision and the former Ultimate Fighter winner proved a few people wrong as he landed a highlight reel knockout by way of a vicious knee strike in the second round.

German fighter Nick Hein kicked off the main card with a big win in front of his home country crowd as he defeated Tae Hyun Bang by unanimous decision after three rounds. Hein was a heavy favorite going into the night, with 77 percent of players picking him to get the win, with another 75 percent selecting him to do so by decision. Hein has now won three fights in a row, all by decision, so fantasy players were right on the money with that selection.

The prelims from Germany provided some thrilling moments and a mix of favorites and underdogs pulling off victories over seven total fights on Saturday.

Jessin Ayari capped off the preliminary bouts with a split decision win over veteran British competitor Jim Wallhead after only 46 percent of players picked him to get the victory on Saturday. It was a grueling battle over three rounds, but Ayari landed the better shots during the back and forth battle to earn his first win in the UFC while Wallhead suffered a heartbreaking defeat after waiting so many years to finally step inside the Octagon.
More from Fight Night Hamburg: Results | Postfight bonuses | Barnett submits Arlovski in Hamburg main event | Gustafsson mauls Blachowicz; Bader, Hein win | Ayari wins debut; Sobotta, Evans-Smith get impressive victories | Backstage interviews: Ashlee Evans-Smith | Octagon interviews: Josh Barnett and Andrei Arlovski, Alexander Gustafsson | Best images from Fight Night | Replay all the fights on UFC FIGHT PASS

Peter Sobotta also pulled off an upset win after only 39 percent of fantasy players picked him to get past Nicolas Dalby in a matchup that provided an additional 120 points thanks to the close odds going into the fight. As it turns out, Sobotta had no intention of leaving this one to chance as he put on a blistering performance to win a lopsided decision over Dalby in the end.

The biggest upset on the prelims belonged to newcomer Jack Hermansson, as he took out British knockout artist Scott Askham in a decision victory. Only 30 percent of fantasy players picked the Swedish middleweight to get the win, but Hermansson showed off some fantastic striking as he dished out a ton of punishment to defeat Askham in his UFC debut. 57 percent did pick Hermansson to win by decision, so those players certainly got a boost with that underdog selection.

As far as the favorites go, Ashlee Evans-Smith proved why 74 percent of players picked her to win on Saturday as she took down newcomer Veronica Macedo and absolutely bludgeoned her with elbows to get a third round stoppage in their bantamweight fight.

Taylor Lapilus and Rustam Khabilov both came through with big wins in German after they were heavy favorites, according to fantasy players going into the event. Lapilus was selected by 76 percent of players, with another 62 percent saying he would win by decision, which is exactly how he defeated veteran fighter Leandro Issa. Meanwhile, Khabilov had to battle to get a win over Leandro Silva, but he still managed to get the job done after 82 percent of players picked him to win.