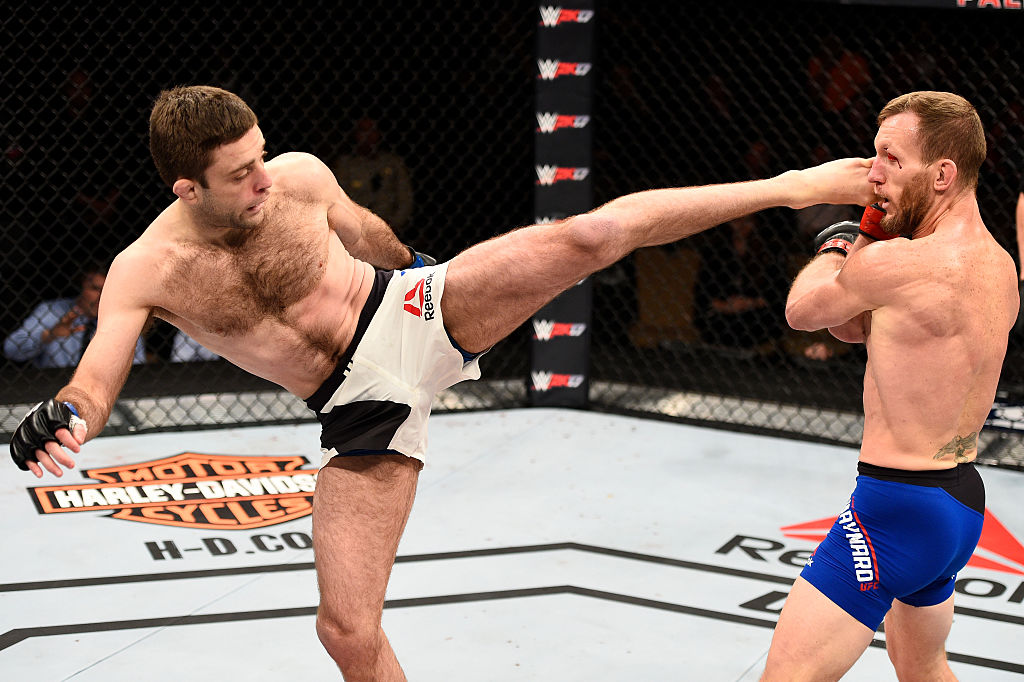 Ultimate Fighter season 22 winner Ryan Hall made his first post-TUF start a winning one at the Pearl at the Palms in Las Vegas on Saturday, as he scored a three-round unanimous decision over Gray Maynard in a featherweight bout.

After avoiding Hall’s first two somersault takedown attempts, Maynard got brought to the mat on the third one but was able to quickly escape and get upright. Another trip to the mat followed, as the unorthodox Hall did whatever necessary to get the fight on the ground. In the midst of all this, Hall landed a couple solid strikes on Maynard, opening a cut over his eye, but Hall’s attempts also served another purpose, as Maynard got more and more frustrated as the round progressed.

With Maynard walking in with his hands down, he got caught with a kick to the head early in round two. This only served to make Maynard more aggressive, which was just what Hall wanted, as it opened up the opportunity for a takedown. And while he didn’t get it in the second, his kicks did more than enough to keep Maynard from putting together a consistent offensive attack.

The final round played out like the previous two, with Maynard more urgent to score, but Hall still pecking away with kicks and continuing to hit the mat in search of takedowns. 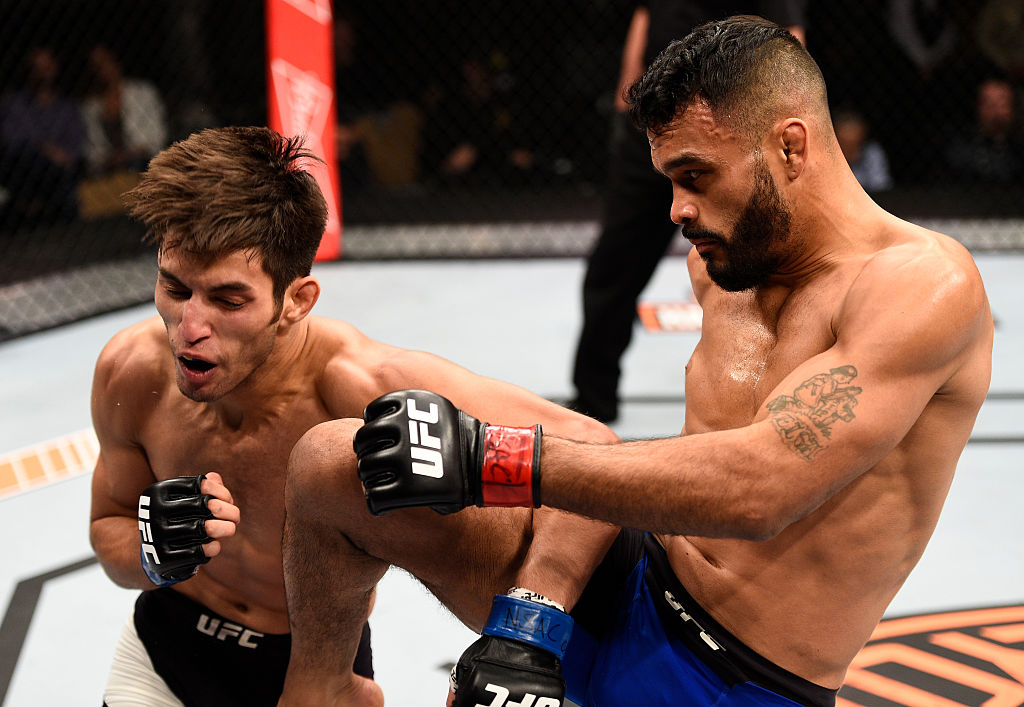 Massachusetts’ Rob Font picked up a stellar win in bantamweight action, stopping late replacement Matt Schnell in the first round.

Schnell’s striking was sharp as the bout began, and Font switched things up, taking his foe to the mat. In the second minute, Font took Schnell’s back and looked for a choke, but Schnell was able to scramble out of trouble and back to his feet. A subsequent front kick to the chin by Font staggered Schnell, and moments later, a knee to the head dropped the Louisianan. From there, Font unleashed his ground strikes, with referee Yves Lavigne stepping in at the 3:47 mark of round one.

With the win, Font moves to 13-2; Schnell, who replaced the injured Alejandro Perez, falls to 10-3. 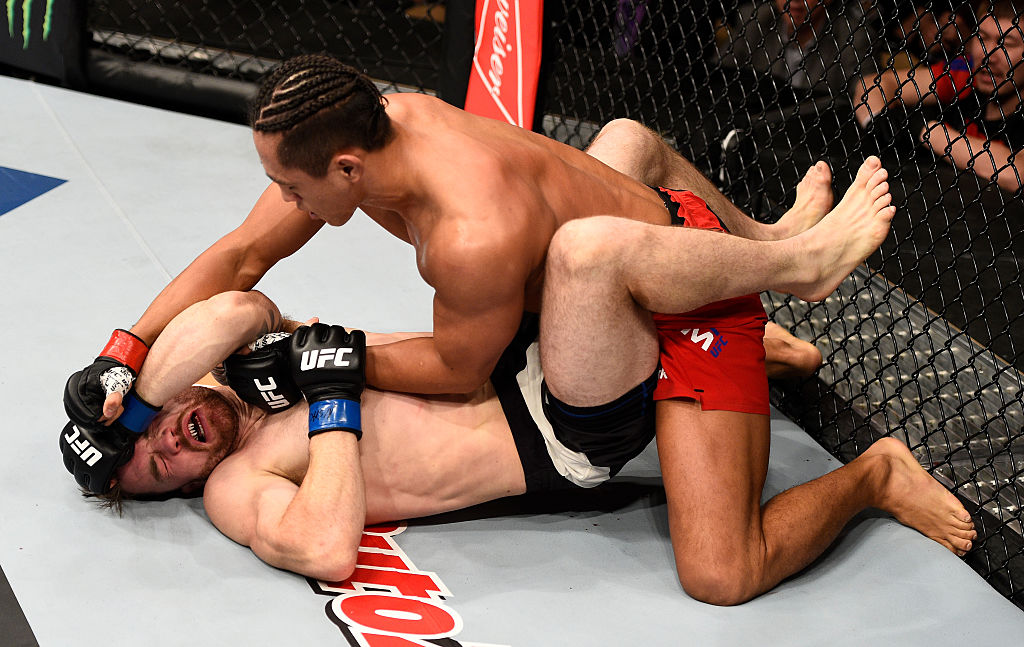 It wasn’t another Fight of the Night for South Korean lightweight Dong Hyun Kim, but the “Maestro” did get the win in his bout against Australia’s Brendan O’Reilly, taking a 29-28 decision on all three judges’ scorecards.

After some grueling clinch work to kick off the bout, Kim got the fight to the mat in the third minute, and while he landed an illegal knee as O’Reilly rose, referee Mark Smith didn’t call it, and Kim stayed busy and remained in dominant positions until the horn sounded.

Kim put the bout back on the canvas in the second, and the “Maestro” continued to dominate until O’Reilly made it back to his feet with a little over a minute to go. While standing, O’Reilly kept the action clinched up, but this time he was in control, landing a hard elbow for good measure. O’Reilly tried to keep the momentum going in the third as he looked to turn the fight around, but Kim’s grappling was enough to cinch up the win. 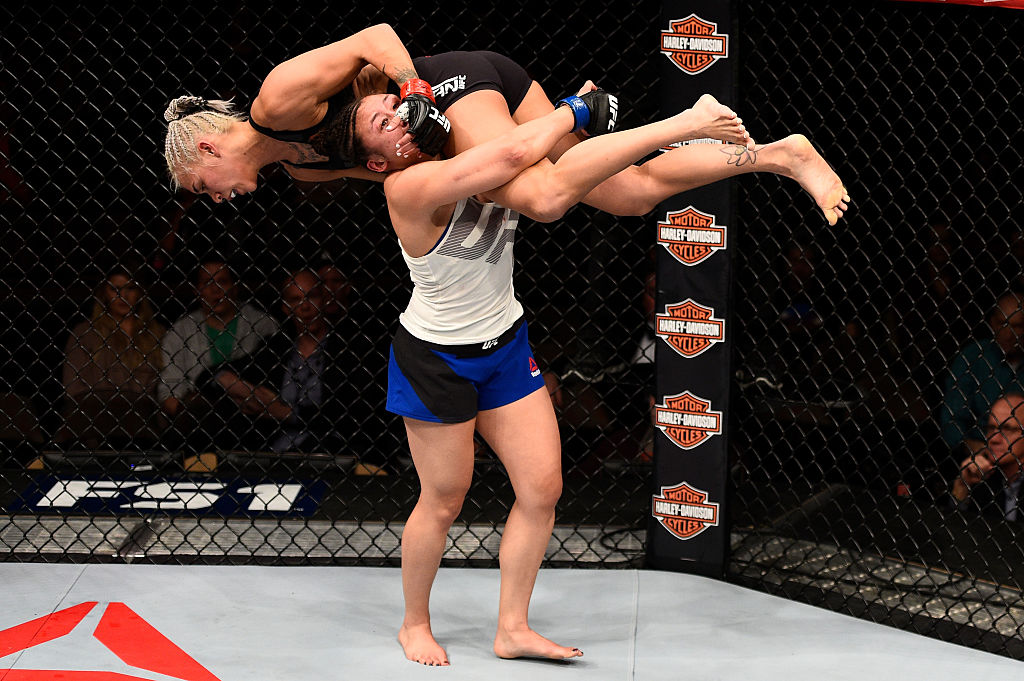 TUF 23 alum Jamie Moyle made her UFC debut a successful one, shutting out Hawaii’s Kailin Curran over three rounds in strawweight action.

Moyle (4-1) took the bout to the mat in the opening seconds of the fight, but Curran stayed out of trouble and got to her feet fairly quickly. Moyle wasn’t interested in a standup fight though, and she went right to the clinch. Curran adjusted well and nearly sunk in a choke before reversing position against the fence, but Moyle kept the pressure on once the two broke free.

The second round was close, Curran doing well at range while Moyle dominated in the clinch, but it was Las Vegas’ Moyle who broke things open late in the round with a thudding slam that scored points but also opened up the mouse that was growing over Moyle’s eye.

Curran (4-4) made a surge in round three, but an illegal knee ended that momentum and put the fight back on the feet. Once restarted, Moyle showed off some more excellent clinch work and her striking was paying dividends as well, but it was her takedown in the final minute that may have sealed the deal on her decision win by three scores of 30-27. 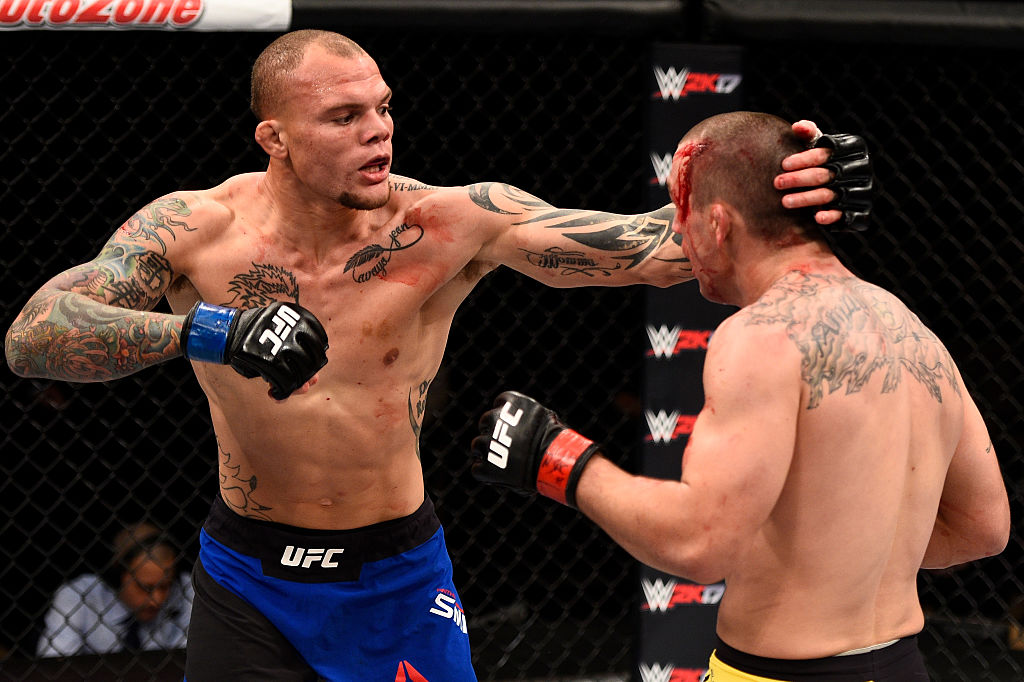 Anthony Smith settled his score with Midwest rival Elvis Mutapcic in emphatic fashion, stopping his fellow middleweight in the second round.

It was a ground-and-pound clinic by Mutapcic throughout much of the first round, as he tripped Smith to the mat early and kept him there, with submission attempts from “Lionheart” coming up empty.

Smith got back into the fight quickly in round two, with his strikes from range tagging, wobbling and bloodying Mutapcic. Mutapcic tried to shake off the blows, but Smith kept pressing until a right elbow put his opponent on the deck. A follow-up barrage made the finish official, with referee Mark Smith stepping in at the 3:27 mark. 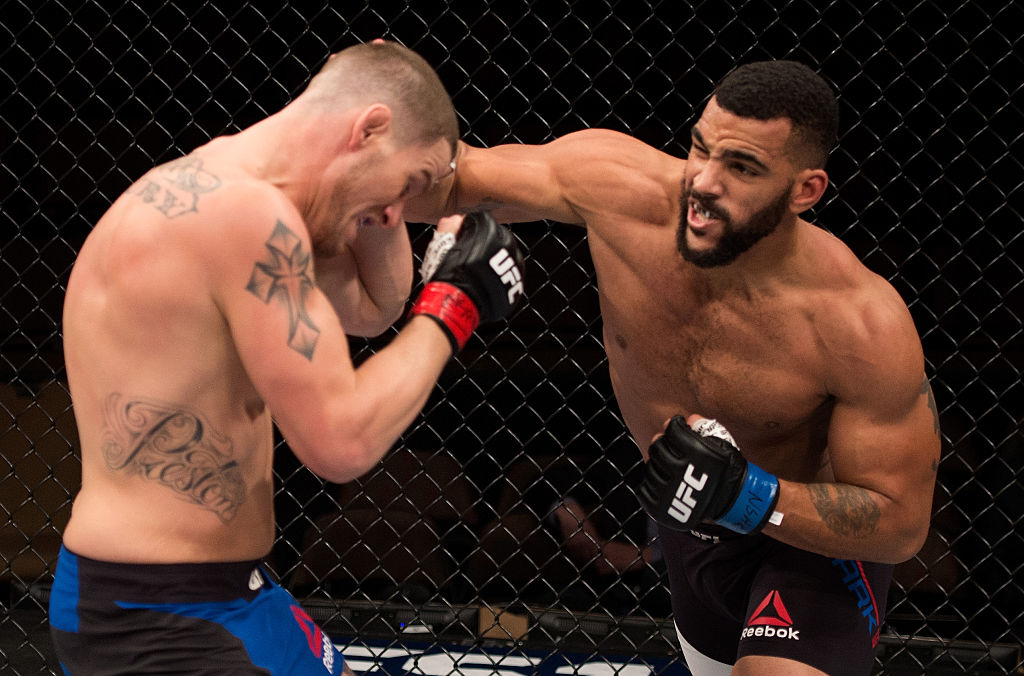 South Dakota’s Devin Clark picked up his first UFC victory in his second try, as he won a three round unanimous decision over Josh Stansbury in the light heavyweight opener.

Clark had a solid, but unspectacular, first round, as he performed well on the feet, in the clinch and on the mat. Stansbury almost turned things around in the closing minute though, as he attempted to lock in a guillotine choke. In the second, Clark kept putting in a workmanlike effort, as he simply kept his work rate higher than his foe.

Stansbury showed some flashes of effective offensive in the final round, but Clark refused to let him back in the fight, which he wound up taking by scores of 30-27 twice and 29-28.