Hall Of Fame Fight: Jon Jones vs Alexander Gustafsson I

Not a lot of people saw it coming.

When the light heavyweight title fight between champion Jon Jones and challenger Alexander Gustafsson was first announced as the headliner for UFC 165, scheduled to take place on September 21, 2013 at the Air Canada Centre in Toronto, Ontario, the initial reaction from some fight fans was lukewarm at best.

Jones had reached that point most dominant champions encounter at some point during their lengthy reign, having piled up five straight successful title defenses with minimal struggle that no matter how skilled, how talented, how deserving the next challenger appeared on paper, few were going to give him a chance.

Jones-Gustafsson I Bout Inducted Into The UFC Hall Of Fame

Gustafsson had done everything you could ask of a challenger at the time, entering the bout on a six-fight winning streak, capping his run with a dominant decision win over Mauricio “Shogun” Rua, the Brazilian icon Jones defeated to claim the title, but it wasn’t enough to convince fans that “The Mauler” could possibly be the man to unseat the reigning champ and burgeoning superstar.

For all the attention that was paid to the promotional trailer for the main event and the fight card as a whole, few people actually paid attention to the fact that from a sheer “tale of the tape” perspective, Gustafsson matched up extremely well with Jones, whose superior reach and ability to control distance had quickly become signature elements of his style.

As good as the Swedish talent had looked over his previous six outings — and Gustafsson had looked very good — Jones was viewed as operating on a completely different level and most envisioned another one-sided affair that ended with Bruce Buffer bellowing the words, “And Still” as UFC President Dana White wrapped the light heavyweight title around the champion’s waist one more time. 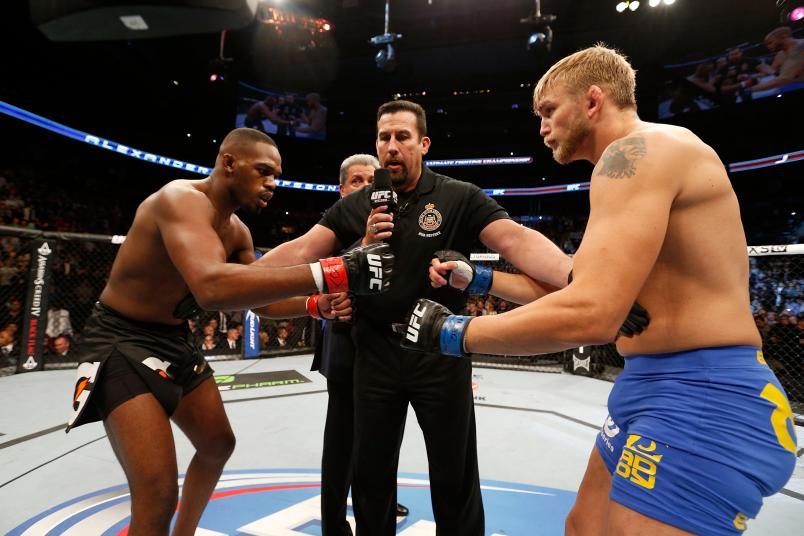 Ultimately, that is what happened, but the journey to that highly anticipated final tableau was much different than anyone anticipated.

The opening five minutes made it clear that those in attendance (and the millions watching around the world) were in for something special.

Gustafsson bounced around on the balls of his feet, closing the distance and connecting with various strikes, including a grazing right hand that opened a cut over the champion’s right eye. Jones was unfazed, stationed in the center of the Octagon, attacking with an assortment of kicks targeting multiple areas, finding his range and making reads.

Late in the frame, the fight hit the canvas for the first time, but it was Gustafsson that secured the takedown, becoming the first person to put Jones on the deck in the UFC. Though the champion quickly jumped back to his feet, the first round made it perfectly clear that Jones was going to have to work if he wanted to retain his title.

The second and third were the kind of narrow gave-and-take frames that turn good fights into great fights, with each man having their moments and a case to be made for either man deserving to land on the happy side of the 10-9 scores being turned in by the judges.

As the seconds ticked off the clock, the energy inside “The Hangar” swelled; each punch feeling more important, more impactful, with the horn to sound the close of each stanza being drowned out by an ovation from the appreciative crowd.

Taking its rightful place in the #UFCHOF 👏

Heading into the championship rounds, it was difficult to say with any certainty which of the two sweat-drenched combatants was ahead on the scorecards. Gustafsson clearly won the first, landing the more damaging blows and putting Jones on the canvas ever so briefly, but the next two frames were a toss-up.

Watching in real time, it was possible to believe that the champion needed a finish in order to retain his title, yet just as equally plausible was that Jones was ahead 2-1 and heading into familiar territory, with the challenger Gustafsson set to wade into uncertain waters, as his only previous main event assignment was a three-round fight against Thiago Silva, who subbed in late for the injured Antonio Rogerio Nogueira.

Already a great fight after three rounds, the final 10 minutes turned the UFC 165 main event into an instant classic, which is why it was selected as a member of the UFC Hall of Fame Class of 2020.

Each man knew they were locked in a close fight and came out looking to swing momentum (and the scores) into their favor to start the fourth, and it was Gustafsson who got the better of it early. He continued to deny Jones’ scattered takedown attempts and got the better of the striking exchanges, evading the counter fire by circling into space and resetting each time the champion tried to respond or connect with a combination of his own.

Heading into the final minute of the fourth round, it genuinely felt like Gustafsson was in control and that the champion, not the challenger, needed to rally, and the champion did exactly that.

With roughly 45 seconds remaining on the clock, Jones connected with a spinning back elbow that caught Gustafsson flush and put the Swede on uncertain footing, with Jones in hot pursuit. As he tried to steady himself, blood slowly started collecting in his hairline, turning his blonde locks a shade familiar to any wrestling fan that watched “The Nature Boy” Ric Flair compete in his NWA heyday, and Jones continued attacking.

Just before the horn, the champion connected with a flying knee that again caused the challenger to wobble in place, but he refused to fall and he instead staggered back to his corner, desperate to have a minute to collect his wits and prepare for the most important five minutes of his professional career. 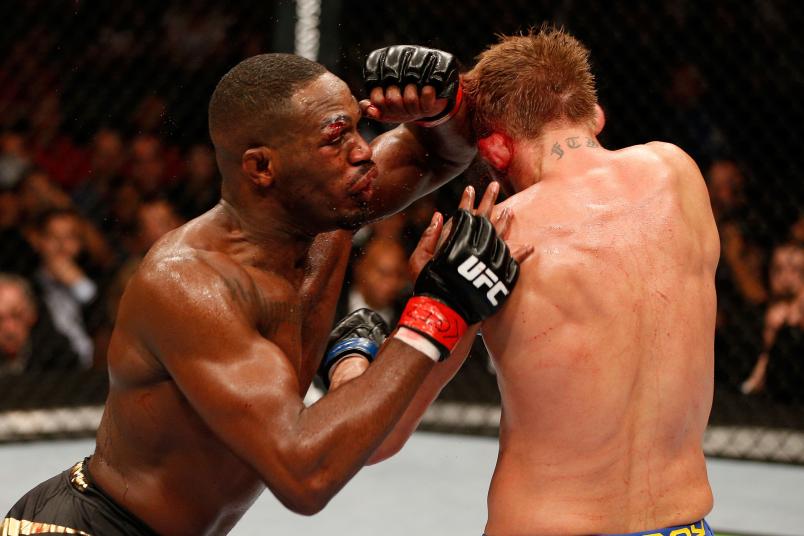 Jon 'Bones' Jones lands an elbow to the head of Alexander 'The Mauler' Gustafsson in their UFC light heavyweight championship bout at the Air Canada Center on September 21, 2013 in Toronto, Ontario, Canada. (Photo by Josh Hedges/Zuffa LLC)

Buoyed by his success down the stretch in the fourth, Jones controlled the fifth and final round, putting increased pressure on Gustafsson and connecting at a much better clip than he had earlier in the contest as exhaustion set in for his Swedish adversary. While Jones proved his championship mettle, digging deep and rising to the occasion when he needed it the most, Gustafsson made it clear that no one should ever question his toughness, taking everything Jones threw at him while somehow managing to stay on his feet.

The final horn sounded as exhausted as the two drained combatants, but the raucous crowd was in full throat, the ovation for Jones and Gustafsson raising an octave or two once the thrilling, competitive affair finally came to a close. Both men raised their arms triumphantly, aided by their coaches, unable to keep them aloft for too long as the 25-minute battle they’d just completed left each of them battered, bloodied, and thoroughly spent.

Not only was the bout instantly ushered to the top of the Fight of the Year rankings for 2013, but conversations began immediately about where it fit in the pantheon of all-time great fights, both in the division and in the UFC as a whole, with most agreeing they had just witnessed the greatest UFC light heavyweight championship fight and perhaps the best UFC title fight ever.

In the moment, the bout revealed another layer to Jones’ greatness, as “Bones” was able to rally and raise his level when it mattered most, while launching Gustafsson to a new level of stardom and recognition, as the somewhat overlooked challenger showed he was indeed a world-class talent, becoming Jones’ first true rival in the process.

A rematch was discussed and then struggled to come together, as Jones embarked on a rivalry with Daniel Cormier and ran into myriad issues that limited his ability to compete. Along the way, the ultra-talented champion stoking the fires by proclaiming that he didn’t train hard for his initial encounter with Gustafsson, suggesting that was the only reason the challenger was able to have as much success as he did. 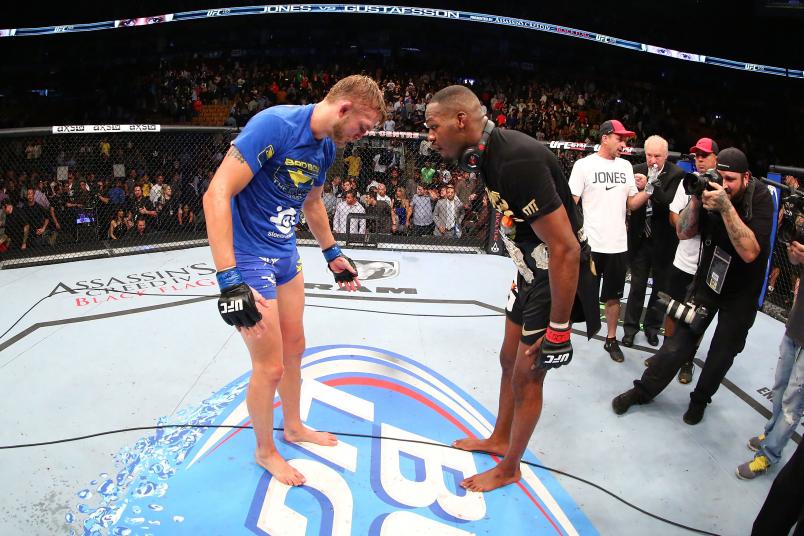 They eventually ran it back at UFC 232 some five-plus years after their classic first meeting, and Jones dominated, claiming the vacant light heavyweight title with a third-round stoppage victory over Gustafsson, giving credence to his prior claims while taking nothing away from that magical autumn night in Toronto five years earlier.

In 2020, there was a pair of championship instant classics — Zhang Weili’s win over Joanna Jedrzejczyk in March, and the flyweight championship draw between Deiveson Figueiredo and Brandon Moreno at UFC 256 — bringing conversations about the best title fight in UFC history back to the fore.

How they’re ranked is ultimately a subjective choice, and while quibbling over personal preferences is one of the main reasons people have Twitter accounts in 2020, what matters most is that you include the right collection of fights when trying to sort out your individual Top 5 or Top 10.

And Jones-Gustafsson I has to be on that list.