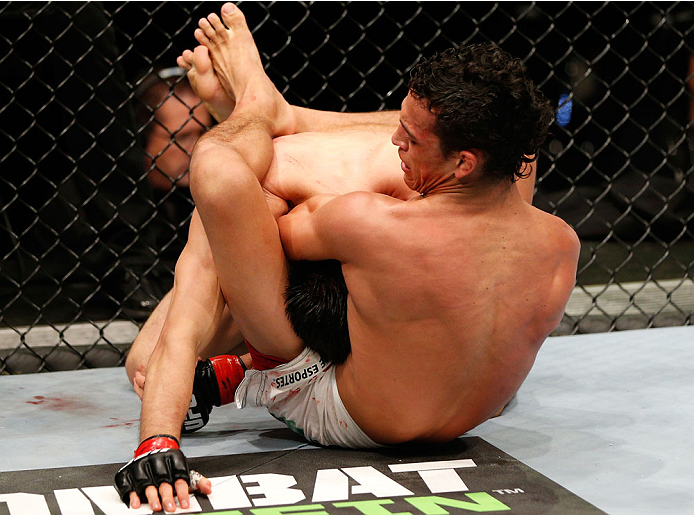 From the sublime to the spectacular, the first half of 2014 had more than its share of memorable submission finishes. Here are this scribe’s picks for the five best of the year so far.

5 – Daniel Cormier-Dan Henderson
On these lists there’s usually one sub on here not because of its technical wizardry, but because it showed the versatility of the victor. That was precisely the case with Daniel Cormier’s win over Dan Henderson, as “DC” showed the evolution of his game by putting Hendo to sleep with a rear naked choke that produced his first submission win (not due to strikes) since 2010.

4 – Leandro Issa-Jumabieke Tuerxun
A high-level Brazilian Jiu-Jitsu black belt, Leandro Issa’s groundfighting credentials are well-established, but he spent the majority of his July bout with China’s Jumabieke Tuerxun standing, trading hard shots with “The Wolf” throughout. Yet by round three, Issa was down on two scorecards, a fact not helped when he was docked a point for grabbing the fence, and he needed a miracle finish. He got one, armbarring his way to a win, as well as $100,000 in bonus money for earning Fight and Performance of the Night awards.

3 – Joseph Benavidez-Timothy Elliott
With four previous wins by guillotine choke, it would be safe to say that Joseph Benavidez had the move down pat, especially since he finished two jiu-jitsu black belts – Miguel Torres and Wagnney Fabiano – with it in the past. So when he locked the choke that he has since renamed the “Joa Constrictor” on Timothy Elliott at UFC 172 in April, it was game, set, and match, and also the rarest of tap outs, as Elliott surrendered with his feet, not hands.

2 – Mitch Clarke-Al Iaquinta
After nearly a year out of action, Canada’s Mitch Clarke wanted to return with a bang, and he did, defeating highly-regarded Al Iaquinta in the second round with a slick D’arce choke that put an end to the New Yorker’s night. The Performance of the Night effort showed just how cool the grappling game can be when in the hands of someone who knows how to use it, especially when some assume that if you’re on your back, you’re losing. Not so, my friends, not so.

1 – Charles Oliveira-Hatsu Hioki
There are certain bouts that you show to folks who say they like fighting, but just not “that ground stuff.” The June matchup between jiu-jitsu black belts Charles Oliveira and Hatsu Hioki is one of those bouts. Compelling and action-packed from start to finish, this was high-level MMA grappling at its finest. When it was over, Oliveira became the first man to submit Hioki, and whether you call it a guillotine, an anaconda, a D’arce, or any modification of those, it was a thing of beauty in a fight you wish they could have restarted and continued.