With Mayweather-McGregor, Jones-Cormier 2 and a hectic July schedule keeping fight fans captivated, it’s taken this “off” week to get down to some business when it comes to celebrating the best of the best for the first half of 2017.

But here we are for the unofficial half-year awards, and while I cheated a bit to extend the cutoff date to UFC 213 on July 8, I don’t think anyone will complain when it comes to the selections here for the top newcomers of the year.

The only problem will be coming up with the top ten in January, as this year has been one of the UFC’s best in terms of new talent. And with fighters like Galore Bofando, Danny Henry, Junior Albini, Eryk Anders, Calvin Kattar, Joseph Morales and Humberto Bandenay all making big debuts in July and August and the gang from Dana White’s Tuesday Night Contender series jumping into the mix, the future looks bright from here.

1 - Volkan Oezdemir
The no brainer pick for top newcomer is Switzerland’s Volkan Oezdemir. Relatively unknown heading into 2017, Oezdemir is now the No. 3-ranked light heavyweight in the world thanks to consecutive victories over Ovince Saint Preux, Misha Cirkunov and Jimi Manuwa, the latter two victories ending in a combined 1:10. That’s a spectacular year for anyone, let alone a half-year, and for “No Time” to do it in his first three UFC fights, that’s going to be a hard act for anyone to follow.

2 - Cynthia Calvillo
In a non-Oezdemir year, we might be seeing Cynthia Calvillo on top of this list, and she still has a chance to surge ahead in the second half, which wouldn’t be a surprise given that the strawweight standout has fought her entire six-fight pro career in the last 12 months. That’s not a typo. Three of those fights were in the UFC this year, as she submitted Amanda Cooper and Pearl Gonzalez and decisioned Joanne Calderwood. That Octagon run put Calvillo in the 115-pound top ten, and the sky is the limit for her.

3 - Justin Gaethje
Spoiler alert…Justin Gaethje’s first UFC fight against Michael Johnson is going to be named the best fight of the first half of 2017 and will likely be the best fight of the entire year unless something very special happens between now and December 31. Gaethje is also my reason for extending the cutoff date for this piece, just so I could get him on the list. That’s the kind

of impression he made on me and the fight world in July. Now anyone who follows the sport knows how good he is, but the skeptics wondered if he could deliver his usual action-packed performances in the UFC. He did, he won, and now he’s coaching TUF against Eddie Alvarez. Gaethje vs. Alvarez? Well, we might have found the fight that can knock Gaethje-Johnson out of the top spot.

4 - Paulo Borrachinha
Many fighters have come into the UFC with a lot of hype and glossy records, only to get a rude awakening once the Octagon gate shuts. Brazil’s Paulo Borrachinha looked the part before his March debut against Garreth McLellan, and then he lived up to the hype with a 77-second knockout win. In his second bout, the 185-pound prospect halted Oluwale Bamgbose in two frames, showing off the same power but a little more patience. As he continues to evolve, Borrachinha will only get scarier. Watch out middleweights.

5 (Tie) - Alexandre Pantoja
A semifinalist on TUF 24, where he was the number one seed, Alexandre Pantoja made a seamless transition into the UFC in 2017, beating two legitimate foes in Eric Shelton and Neil Seery. Those victories earned him a spot in the flyweight top 15 that is only going to go higher in the future, as the Brazilian looks like he’s the real deal at 125 pounds. 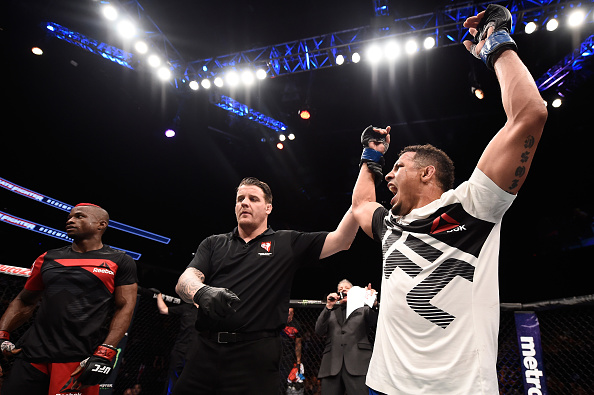 5 – (Tie) Drakkar Klose
A member of the respected MMA Lab team in Arizona, Drakkar Klose was dominant in his UFC debut win over Devin Powell in January. But it was his victory over fellow lightweight prospect Marc Diakiese in July that opened the eyes of the MMA fanbase and marked the Michigan native as a fighter to watch in one of the sport’s toughest divisions.