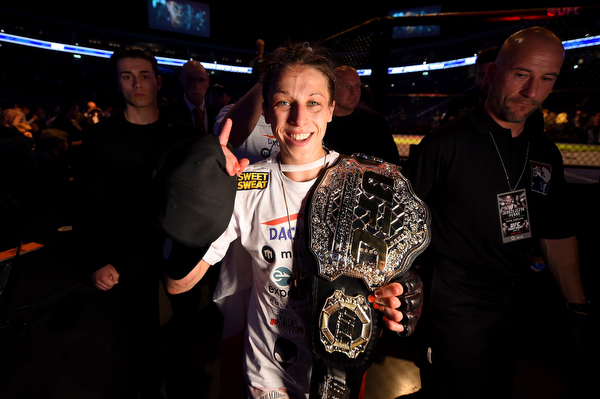 It’s all come down to this – the best fighter of the first six months of 2015. As always, the rule is that someone had to have fought at least twice to be considered for the list, but with so many shows, what used to be an issue is an issue no longer, as there were plenty of top performers showing what they do best in the Octagon.

5 - Daniel Cormier
If you told Daniel Cormier on January 4 that he was going to be UFC light heavyweight champion on the Fourth of July, he would have thanked you for the kind words before calling you crazy. But the MMA world is a crazy one, and after a gutsy effort at UFC 182 against Jon Jones on January 3, Cormier got a short notice call to replace the suspended Jones in a bout for the vacant 205-pound crown against Anthony Johnson on May 23. It was the second chance Cormier craved, and he made the most of it, submitting Johnson in the third round, earning himself the title in the process.

4 - Dustin Poirier
Dustin Poirier takes every loss hard, but dropping a September 2014 bout to Conor McGregor really hit the Louisiana native where it hurts, and in response, he made a tough decision to leave the featherweight division – where he was a top ten contender – to move to the lightweight class that he started his career in. It was the perfect call, and he’s proved it thus far in 2015 with two extremely impressive knockouts of Diego Ferreira and Yancy Medeiros. Oh yeah, “The Diamond” has found a home.

3 - Max Holloway
Max Holloway has grown up in the Octagon, and while he was a relative youngster when he debuted against Dustin Poirier in 2012, at 23, he’s still a young gun, and one of the most dangerous featherweights in the world. Winner of six straight, the Hawaiian upped the ante in 2015, decisioning veteran Cole Miller and then submitting top contender Cub Swanson. Now preparing for a headlining gig against Charles Oliveira in August, Holloway will likely put himself in the title conversation with a win.

2 - Donald Cerrone
Everyone loves Cowboy, and for good reason. He’s the walking, talking embodiment of the fighting ideal of “I’ll fight anyone, anywhere, at any time.” And though he’s likely going to have to sit out longer than he’d like to in order to get his crack at the lightweight title, he certainly went to work in the first half of 2015, handing Myles Jury his first pro loss in January, taking a close one over Benson Henderson 15 days later, and then stopping John Makdessi in May. That’s a full year for most, but not for Cerrone.

1 - Joanna Jedrzejczyk
Joanna Jedrzejczyk made an immediate impact in the Octagon in 2014 with wins over Juliana Lima and Claudia Gadelha, but who could have predicted that the young lady from Olsztyn, Poland would rule the world in 2015? The best 115-pound fighter in the world, Jedrzejczyk had become a fan favorite simply because when the bell rings on fight night, she goes on a mission of destruction. This year, Jedrzejczyk won the UFC strawweight title with a dominant two-round stoppage of Carla Esparza, and she then successfully defended her title with a punishing TKO of Jessica Penne. It may be too early to tell for sure, but it looks like Joanna Champion may be on top for a while.