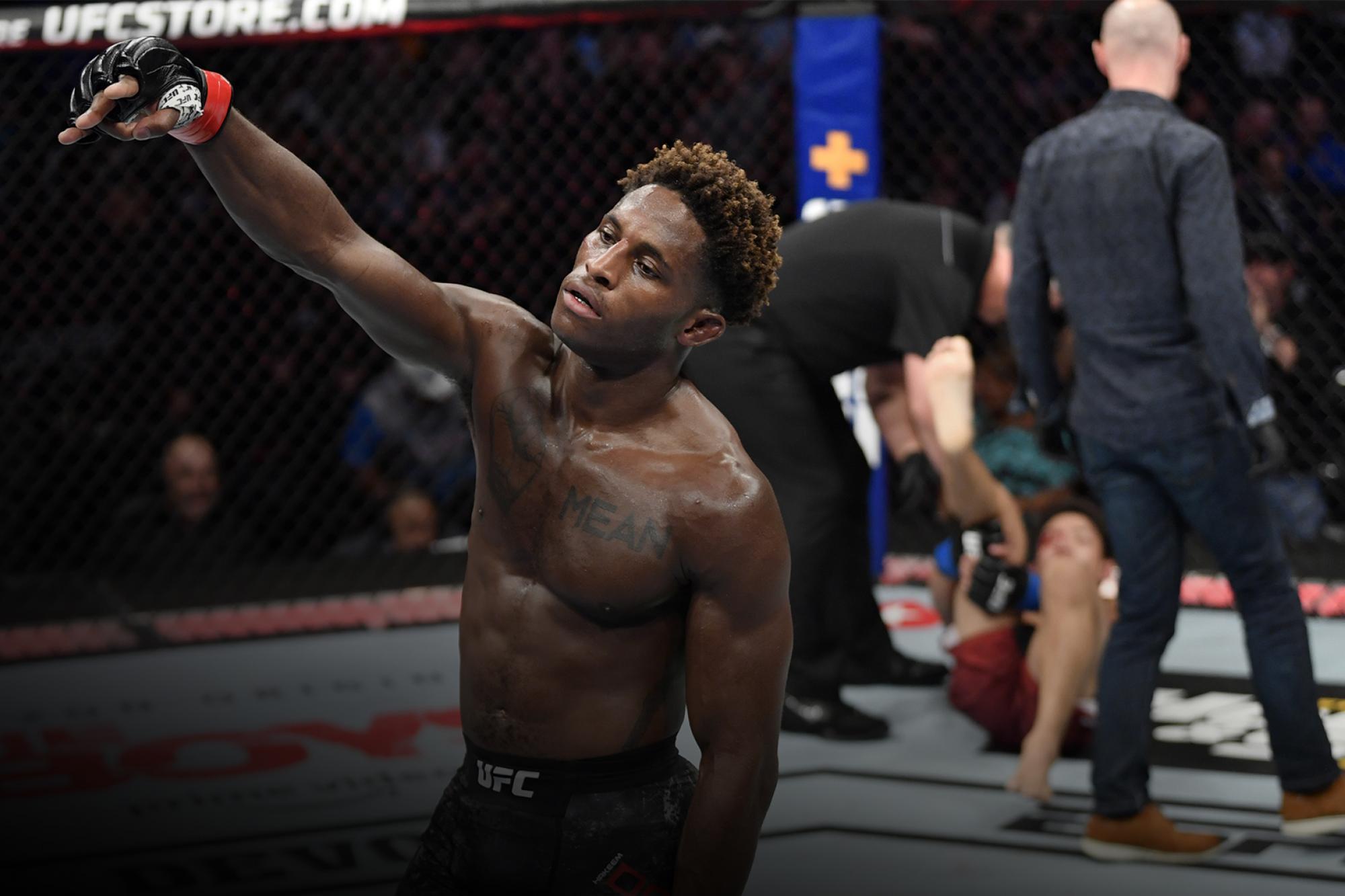 As Hakeem Dawodu readies to take on Julio Arce on Saturday night at UFC 244, the emerging featherweight is taking a big picture point of view on his career.

“I’m 28 years old — I’m in my prime — and I feel like it’s my time to shine,” began Dawodu, who enters his preliminary card pairing with Arce on a three-fight winning streak and coming off his first stoppage victory in the UFC. “I respect this kid, but I’m going to go in, get this finish and start setting up my name to be a superstar.

“I’m ready to make a run,” added the Calgary, Alberta resident. “I’m in good shape and I’ve got no injuries. Now that this is my fifth UFC appearance, I’m starting to feel comfortable.”

A standout kickboxer who started making waves at home in Alberta before garnering greater interest from the MMA community as he pushed his unbeaten streak to eight under the World Series of Fighting banner, Dawodu entered the UFC saddled with sizeable expectations.

He’d earned finishes in six of his seven wins and outworked TUF alum Steven Siler in his final non-UFC appearance. Before making his first trip into the Octagon, Dawodu headed across the Atlantic to train with John Kavanagh and the team at SBG Ireland. On top of that, his arrival on the big stage came at a time when everyone was searching for the next Canadian prospect to hitch their wagon to, and with an undefeated record and a wealth of potential, Dawodu was an obvious choice.

But then his debut went about as poorly as possible, as Danny Henry wobbled him with a clean shot right out of the chute before snatching up a guillotine choke that ultimately put Dawodu to sleep. The whole thing lasted 39 seconds and left many people wondering what all the hype was about.

Back training exclusively in Calgary and finally healthy, Dawodu has used his last three appearances to show fans and observers what all the fuss was about, culminating with his third-round stoppage win over Yoshinori Horie at UFC 240 this summer in Edmonton.

“I don’t know if everybody knows, but after my first UFC fight, I had some torn shoulders,” explained Dawodu, offering insights, not an excuse. “So after I fought Kyle Bochniak, I got PRP on them and fixed them up and that was a big part (of being able to perform the way I wanted to in Edmonton).

“That loss was a tough loss,” he said, reflecting on his debut defeat. “It was my only loss as a professional — I was 9-0 as a pro kickboxer and I was 7-0-1 in MMA — so that first loss definitely sucked, but after it happened, I was like, ‘That wasn’t that bad.’ I came back stronger and I feel like even though I always pictured myself being perfect like Floyd Mayweather, I think everything happens for a reason. It matured me as a fighter. I’ve been through a lot of adversity and it made me a better fighter and a stronger fighter.

“Being healthy and being confident and getting back to the old me were the biggest things in getting me to where I’m at now.”

So too has carrying the hopes of Canadian MMA fans and emerging as a role model for kids going through some of the same trials and tribulations Dawodu endured during his youth.

“I’m glad that I can inspire some kids on my way to getting that championship,” said Dawodu, who was sent to a juvenile detention center for the first time at 14 and was headed down a dangerous path before his probation officer directed him to Mike Miles’ kickboxing gym as a means of anger management.

“I want to set a good example for these kids and show them that you can change and you can make your dreams into reality. I’m living my best life and keeping clean, keeping out of trouble — doing what I do and focusing on my career.

“And I’m honored that Canada is willing to let me represent them and I take that responsibility seriously,” added Dawodu, who is one of a small group of Canadian talents whose upside still remains undefined inside the Octagon. “I definitely feel like there is pressure on me to be the next big thing, but this is my 70th fight coming up and it’s just another day in the office when it’s all said and done.

“I’m training as hard as possible and doing everything to be the best fighter I can be and November 2, I’m going to make Canada proud.”

The matchup with Arce, which is the first of a dozen fights that will take place at Madison Square Garden on Saturday night, is a step up in competition for the Calgarian and a chance for the 28-year-old to position himself for greater opportunities heading into next year.

Fighting out of Queens, New York and representing Team Tiger Schulmann, the 29-year-old Arce garnered a reputation as a tough out and talented fighter on the competitive east coast regional circuit before finally getting the call to the Octagon at the start of 2018. He’s gone 3-1 over his first four starts, with his only setback coming by way of split decision, and he heads into Saturday’s bout off a blistering head-kick finish of Julian Erosa.

“I’m happy that they’re giving me the opportunity,” Dawodu said in regards to being a part of this weekend’s massive pay-per-view event in New York City. “I’ve never been to MSG, so I think it hasn’t really hit me how big it is, but at the end of the day, a fight is a fight.

“This is my 70th fight and I’m just focusing on the fight. All the other stuff, I’m not going to let it faze me or get me too excited. I’m just going to knock this kid out and then I’ll take it all in.”

If things go as planned and he does become the second fighter to finish Arce while kicking off UFC 244 with a bang, don’t be surprised if more people outside of Canada start talking about “Mean Hakeem” potentially being “the next big thing” in the featherweight division.