Hakeem Dawodu Is Out To Make Huge Statements In 2022

Breaking into the UFC featherweight rankings has always been the goal for Hakeem Dawodu. So, when he finally had a shot at facing a ranked opponent in Movsar Evloev last June, nothing was going to stop him from making the walk to the Octagon.

Not even a herniated disk in his neck.

“Yeah, the fight with Movsar Evloev, it was one of those fights where unfortunately I was injured before the fight. I herniated my disk in my C7 and I was on bed rest for like two months,” Dawodu told UFC.com. “I thought it was just a regular injury, but it hit a nerve and my right arm got really skinny and weak. The last three or four weeks I trained to get ready for that fight because it was a big opportunity to fight a ranked opponent.”

Dawodu would go on to lose the bout with Evloev by unanimous decision. It was Dawodu’s second career loss as a professional (12-2-1) and his first since his UFC debut in 2018. Regardless of the outcome, Dawodu left the Octagon that night with plenty of reason to feel good about his performance.

“It didn’t go my way, but even though I was injured I was able to get through the fight,” Dawodu said. “It just showed whether I’m injured or at 100% that I’m a real fighter.”

Being a real fighter is what Canada’s Dawodu is all about. He’s looking to have fights that get fans on the edge of their seats while he inflicts some damage on his opponent. Next up on Dawodu’s hit list is Michael Trizano, who won The Ultimate Fighter Season 27 in 2018. 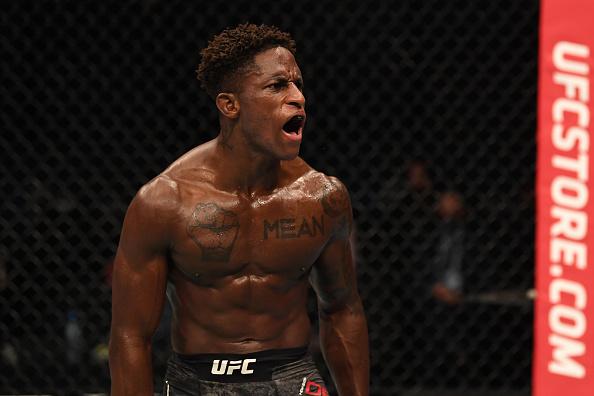 Hakeem Dawodu of Canada reacts after finishing three rounds against Zubaira Tukhugov of Russia in their featherweight bout during UFC 253 inside Flash Forum on UFC Fight Island on September 27, 2020 in Abu Dhabi, United Arab Emirates. (Photo by Josh Hedges/Zuffa LLC)

Hakeem Dawodu of Canada reacts after finishing three rounds against Zubaira Tukhugov of Russia in their featherweight bout during UFC 253 inside Flash Forum on UFC Fight Island on September 27, 2020 in Abu Dhabi, United Arab Emirates. (Photo by Josh Hedge

Dawodu believes that Trizano is a good opponent, but he’s not impressed by his opponent’s shiny 10-1 record.

“I think he’s going to have a hard time with my speed, a hard time with my power and with my skills and the experience,” Dawodu said. “He’s got a decent record, as well, but if you look at who has fought the more experienced guys throughout their career, it’s been me. He’s fought a lot of nobodies and I’m not saying that I’m not going to respect him and that I’m not taking this fight seriously, but I think I just have a bigger pedigree and a lot more experience, and that’s going to show.”

The first time that Dawodu failed to get his hand raised in the Octagon, he ripped off five straight wins, and he’s determined to go on another run starting at UFC Fight Night: Hermansson vs Strickland. 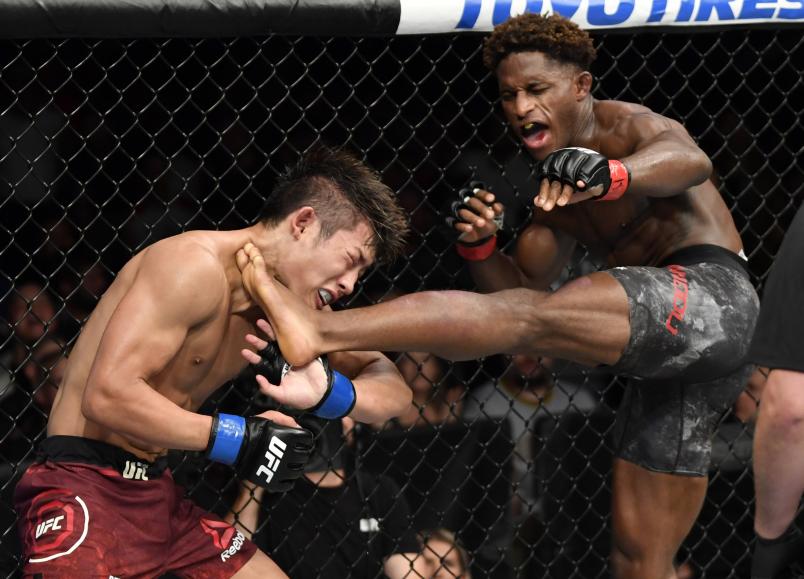 Hakeem Dawodu of Canada kicks Yoshinori Horie in their featherweight bout during the UFC 240 event at Rogers Place on July 27, 2019 in Edmonton, Alberta, Canada. (Photo by Jeff Bottari/Zuffa LLC)

“I’m ready to get back to my winning ways and go on a winning streak right to the title shot,” Dawodu said. “You’re going to see ‘Mean’ Hakeem in this fight.”

A dominant showing against Trizano would help put more respect on Dawodu’s name and pave the way to another crack at the featherweight elite. That’s truly what 2022 is all about for Dawodu; all he must do now that he’s fully healthy and motivated is take care of business.

“I want to make some huge statements,” Dawodu said. “I want to get a lot of finishes this year and I want to get into the top ten. I want to start being talked about when they’re talking about title contenders. That’s always been my goal and that’s still the goal.”