Hakeem Dawodu: The Next Face Of Canadian MMA?

Hakeem “Mean” Dawodu. Get familiar with the name, because the 28 year old featherweight plans on becoming “the next face of Canadian MMA.”

Dawodu grew up in Calgary, embroiled in the harsh reality of gang life. Financial strains on his single mother led Dawodu to steal, scrape in the street, and experiment with drugs. He spent his teen years in and out of juvenile detention, and at 17 was sentenced to house arrest and anger management courses. But two guardian angels steered him onto the path to victory.

The first was an old man whom Dawodu recalled looked like Cus D’Amoto, Mike Tyson’s old trainer. The man approached adolescent Dawodu and told him that he looked like a boxer in the making, so he bought him a boxing gym membership. Dawodu never saw the kind stranger again, and lamented that he never got the chance to thank him.

Dawodu professed he became “hooked” on boxing, but at the time it did little more than give him an edge in street fights. It wasn’t until his house arrest that he became a devotee of the sport. His probation officer noticed that Dawodu was trying to turn his life around, so she swapped MMA training for the mandated courses. The strict training schedule demanded responsibility, it taught Dawodu discipline, and it gave him pride. He now receives DMs from kids who view him as a role model, so Dawodu is critically aware of the image he projects.

“I know I can inspire now, so I try to be the best person that I can, because there’s a lot of kids that are in the same situation I was in,” he said.

It hasn’t been an easy journey, but it’s one Dawodu believes he was destined to pursue. He made his amateur debut after only three months of training, and rounded out his first year with 22 fights. By year two, he was crowned the amateur world champion.

Dawodu’s prowess lies with his knockout abilities, as six of his 11 professional fights ended with his opponent asleep on the mat. It even earned him the nickname “Mean.”

He even dealt these punishing blows while battling two injured shoulders. Dawodu first attributed the pain to muscle soreness and overtraining, but when it only intensified weeks later, he went to the doctor. Both shoulders were ripped along the rotator cuff, preventing him from doing bench presses or push-ups. Instead, Dawodu altered his training to focus on strengthening his kicks, for he was adamant he fight in Calgary.

“I was coming off my loss, and I wanted to redeem myself. I took the Calgary fight with the injured shoulder, knowing it was injured. I was just so hungry to get a win that I just didn’t care, so I decided to bang it out and deal with it later” 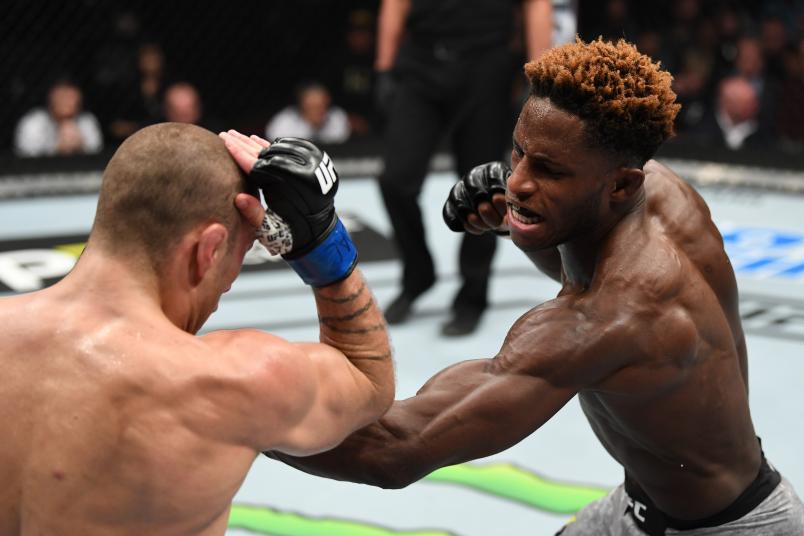 Dawodu won that fight, and another after that before undergoing surgery. UFC 240 marks his return, and his third fight in his home country of Canada. He faces Pancrase veteran Yoshinori Horie, who also comes to the Octagon with fists of steel and a knack for finishes.

“I am not taking him for granted, but I think I can beat him anywhere the fight goes, whether it’s on the feet or on the ground. I respect him but I can put him away so many different ways, so we’ll see what he gives me.”

Dawodu is at ease, confident in his abilities and already anticipating the Knockout of the Night bonus. Afterwards, his sights are already on the far future.

“The plan is to have a quick turnaround, to just keep banging these fights out and go to UFC Vancouver. Then we want to start getting some Top 10 opponents, and eventually get that title run.”