Hail, Hail to the Bonus Kings

"I had to win the way I wanted to win. If I went out there and won an
ultra conservative, boring fight, then I wasn’t happy with myself." - Chris Lytle 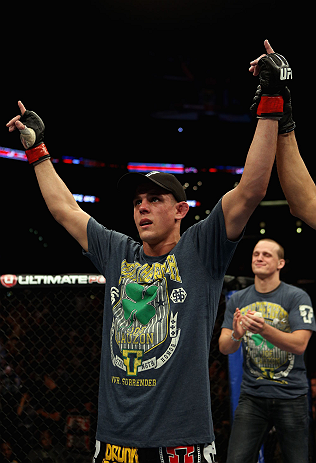 Joe Lauzon had multiple wins in the UFC, beaten a former world champion and fought on national television before he even decided to make professional fighting his full-time career. Back in 2006, the man currently in second place (behind Anderson Silva) for most UFC fight night bonus awards was a kid just out of college making his organizational debut against legend and former lightweight world champ Jens Pulver.

Lauzon emphatically showed that he belonged in the UFC by finishing Pulver in the first round and went on to make an impressive run on the talent-rich Ultimate Fighter Season 5 but was still working a 9 to 5 in the information technology world. “Initially, I liked the idea of doing both,” he tells UFC.com.

“I didn’t want to put all of my eggs in one basket. I worked during the day and trained at night. When I finished college it already felt like I was training so much more because it was just work and training, no classes.”

His time on TUF motivated Lauzon to give MMA his full attention, however. “When I went on TUF I met Allen Berube, who was another fighter competing for the contract. At the time he was a little bit older, around 31, and he wanted so bad to be in the UFC. But he had only been doing Jiu-Jitsu for a few years and time had passed him up,” Lauzon remembers.

“He was a couple of years too late and a few years too old. It made me realize that if I wanted to do this, if I wanted to fight, then I needed to do it. If I half-assed it I could be kicking myself in a couple years, wondering what would have happened if I trained one hundred percent. I decided that if I won my fight on the finale then I would quit my job. If it didn’t go so well then that would be a measuring stick.”

Berube opened Lauzon’s eyes to the opportunities before him, generally, but the financial success he soon found fighting in the UFC really let him know what he could achieve. “At the finale I won and got the Submission of the Night award. I had already gotten Knockout of the Night against Pulver. I made more in these two fights than in a year of working at my IT job. I thought, ‘I can do this. I can definitely make more money fighting than I can make working.’ If it ended up being that I just did it for a couple fights or years, then I could always go back to work,” Lauzon says.

Many wins, submissions and KOs later, Lauzon says that he’s “not worried about going back to work,” anymore.

It took Chris Lytle more than two UFC fights to realize he could make a good living from MMA. The Indiana fireman first fought in the UFC before its current ownership, Zuffa, took over.

Back in 2000, Lytle made his promotional debut at UFC 28 and made $500 for his efforts. But the money on the line during the fourth season of TUF got Lytle’s attention.

The winners of “The Comeback” season were to be awarded $100,000 UFC contracts as well as $100,000 sponsorship contracts. “I was fired up about the big money,” Lytle remembers.

The father saw an opportunity to pay his family back for all the time he spent away from them while training MMA for so many years, if he could only win TUF. The result was that Lytle fought very conservatively, to not lose instead of aggressively going after victories.

He made it to the finals against Matt Serra but lost a razor-thin split decision in a mostly slow fight. Lytle came in a distant second and Serra went on to win the welterweight championship of the world.

“[Being focused on the fighting] affected me,” Lytle remembers. “I felt a lot of responsibility to my family. I had missed a lot of stuff and I wanted to pay them off for it. I got too focused on the money. I thought, “I don’t care if anyone likes this fight, all I care is if I like it. And if I win, I’ll like it.”

When Joe Lauzon earned Fight of the Night and Submission of the Night honors at UFC on FOX in August of this year, he moved past Lytle and Nate Diaz into second place on the organization’s all-time bonus list. Devastated, not by losing, but by not giving it his all and then losing, Lytle changed his fight philosophy after the TUF Finale.

The result was that the journeyman transformed himself into a star and he retired last year as one of the very best welterweights on the globe. “When I lost to Serra it ended up being about a $240,000 difference between winning first and second. What I figured out is the only harder thing than losing a fight is losing a fight where you didn’t go out there and give it everything you had. That’s as bad of a feeling as you can have and I wanted to avoid that at all costs,” he says.

“After losing TUF 4, I thought, ‘all that pressure that I put on myself, it is always going to be gone from here on out. Now, I’d rather go out there and lose a great fight and feel good about myself than knowing I just didn’t do what I could in the fight.’ I just got that in my head and that was it.”

Joe Lauzon is very proud of his reputation as an exciting fighter, but believes that it is the product of his always trying to go for a finish. “J-Lau” says that he never wants to be seen as tough for tough’s sake, because that means that all he’d be doing is taking a lot of punishment for the entertainment of fans.

“I love fighting but I also want to remember where I parked my car when I’m 40,” he says. “Unnecessary head trauma is not good for anyone. Anytime someone says you’re a ‘tough guy,’ it means you got your ass whooped but kind of survived and got out of there. I’d rather have great defense, not get hit that much, have great Jiu-Jitsu and be a good finisher.”

Lytle does not express the same disdain for the term, ‘tough guy,’ but emphasizes that, even when he made the switch after TUF 4, it was always about winning. “I don’t want to make it seem that winning wasn’t extremely important, because it always was,” he explains.

“It’s that it wasn’t enough just to win. I had to win the way I wanted to win. If I went out there and won an ultra conservative, boring fight, then I wasn’t happy with myself.”

Both Lytle and Lauzon should be very happy with themselves based on what they’ve done in the Octagon. Each man has also managed to move their careers way past their humble beginnings due to their excellence and exciting fighting styles.

UFC fight night bonuses have transformed Lauzon and Lytle’s lives. Lauzon has parlayed his success as a fighter to owning and operating his own gym in Massachusetts, and he no longer fears having to return to the 9 to 5 office grind. Lytle says he’s achieved a degree of economic freedom that gives him pride and allows him to provide for his family of six.

“I’m just trying to set up for our future,” he says. “And the bonuses have meant a certain level of freedom, of not having to worry about different things. I don’t have to worry about how [my family] is going to get by or pay for this or go there. I have been able to make a few different investments, I have a few properties now and a business that I’m involved with. It is amazing the amount of freedom that they have given me. I have always felt a sense of loyalty and duty and responsibility to the UFC because of this. They’ve given me the opportunity to do this.

“I’ve always taken a great deal of pride in my being the only provider for my family. There’s six people I’m responsible for and it is good peace of mind knowing that I’ve been able to do that. It has helped me feel better about myself. If there’s something that needs taking care of, it’s going to get taken care of and I’m the one taking care of it.”