The H-Bomb Rescues Hendo in Brazil

It wasn’t a repeat of their first meeting over two years ago in terms of
a sustained 25 minutes of action, but Sunday, at the sweltering Ginasio
Nelio Dias in Natal, Brazil, veteran MMA superstars Dan Henderson
and Mauricio “Shogun” Rua added another worthy chapter to their series,
with “Hendo” emerging victorious once again, snapping a three fight
losing streak this time by way of a come from behind third round
knockout.

“This one probably means more than most,” said
Henderson, who defeated Rua via five round decision in their first bout
in November of 2011, a fight most consider to be one of the best of
all-time. “Shogun has been such a big part of mixed martial arts and
such a talented and tough fighter. Especially after the year I had last
year, coming off that I wanted to make sure I got a win.”

It was a
war of nerves in the opening minutes of the fight, with Rua’s leg kicks
doing practically all the scoring, but Henderson slowly but surely
getting himself into range to land his fight-altering right hand. It was
Henderson’s left hook that was the big shot that scored though, rocking
Rua. Shogun got even right away with a left of his own, hurting Hendo
badly. Rua moved in for the finish, yet after some rough moments,
Henderson made it to the end of the round.

After being told by
his corner to wrestle, Henderson still looked to land his “H-Bomb” in
round two, but it was Shogun confidently moving forward and locking his
opponent against the fence before breaking and resuming their stand-up
battle. An ensuing takedown attempt by Henderson was easily tossed aside
by the former UFC light heavyweight champion, and a follow-up right
uppercut put the American on the deck again. After a stalemate, referee
Herb Dean restarted the action with under a minute left, and Rua was
clearly the fresher of the two, with Hendo’s fatigue perhaps due not
just to his foe’s punches, but the 94 degree heat in the building.

But
in the third round, Henderson struck paydirt with the right hand,
drilling the 32-year-old Rua and sending him to the canvas. Rua appeared
to be seeking a single leg takedown as Henderson delivered another
right hand, but after a series of hammerfists, Dean intervened, halting
matters at the 1:31 mark.

The 43-year-old Henderson, who was coming off losses to Lyoto Machida, Rashad Evans, and Vitor Belfort, moves to 30-11 with the win; Curitiba’s Rua falls to 22-9.

Arizona’s CB Dollaway made it two for two in Brazil, as he followed up his 2013 win over Daniel Sarafian with a 39 second knockout of TUF Brazil 1 winner Cezar Ferreira.

Ferreira
came out firing at Dollaway, but as soon as “The Doberman” staggered
his foe with a straight right, the die was cast. Dollaway moved in, and
as the two exchanged, a left hook put “Mutante” on the deck. The
Brazilian seemed to have recovered, but Dollaway wouldn’t let him off
the hook, pounding away with both hands until referee Mario Yamasaki
stopped the fight just 39 seconds into the opening round.

Dollaway improves to 15-6 with the win; Belo Horizonte’s Ferreira, who lost for the first time in four UFC bouts, falls to 8-3.

A second round point deduction cost Norman Parke his eleventh straight win in lightweight action, with his three rounder against Leonardo Santos being ruled a draw.

Scores were 28-28 twice and 29-27 in the battle between former Ultimate Fighter winners.

Santos’
striking was sharp in the opening round, with kicks to the head and
body being his main 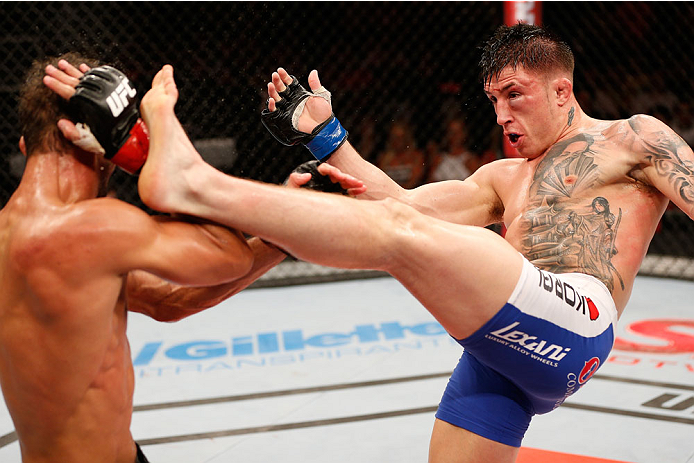 weapon of choice. The Rio native got his punches in
as well, raising a swelling under Parke’s left eye. Parke aggressively
went after Santos in response, but he wasn’t able to get into any form
of offensive rhythm until a late round rally.

In round two, Parke
lost a point without warning from referee Wernei Cardoso for grabbing
Santos’ shorts, putting him in a hole on the scorecards, even if he did
have a good second frame against the Brazilian.

Parke (20-2-1)
stayed in control in the final round, pinning Santos (12-4-1) to the
fence and mauling him there for much of the final five minutes.

Gian Villante looked to be heading to an easy win over Fabio Maldonado
in their light heavyweight bout, but after being on the wrong end of a
rough first round, Florianopolis’ Maldonado roared back to dominate the
next two frames and earn a clear-cut unanimous decision victory.

Villante
took Maldonado down as soon as he got his hands on him, and he smoothly
moved from side control, taking Maldonado’s back. While there, Villante
unleashed knees to the legs, keeping the Brazilian from getting any
offense going. With less than two minutes left, Villante took side
mount, his dominance bringing boos from the Natal crowd, but the New
Yorker wasn’t budging.

Maldonado finally got his stand-up game
going in the second, with a jackhammer jab doing 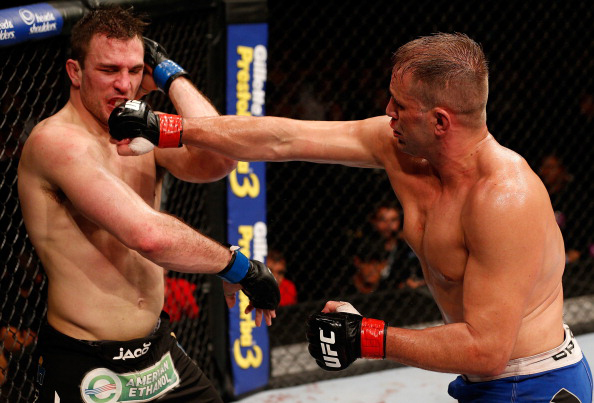 much on the dirty work.
Villante, who landed a hard left early in the round, went back to what
was working, locking up Maldonado and putting him on the deck. As the
two rose with under three minutes to go, knees by Villante cut the
Brazilian around the eye, but it appeared to fire up Maldonado, who went
after the Strikeforce veteran
with shots to the head and body. At this point, Villante was clearly
winded from the body attack, and Maldonado was just getting warmed up,
igniting the crowd.

Villante went for a takedown as the third
round opened, but Maldonado tossed it aside and went back on the attack
against his exhausted foe. The body shots were clearly having an effect
on Villante, and Maldonado wasn’t going to let up. Villante kept looking
for the takedown though, showing a lot of heart as Maldonado teed off
with both hands until the fight ended.

Belem’s Michel Prazeres was on top of his game for all three rounds against Mairbek Taisumov, handing the Grozny native his first UFC loss by way of a shutout three round decision.

All three scores for Prazeres in the lightweight bout were 30-25.

Prazeres
(18-1) tagged Taisumov at will early on, allowing him to close the
distance and slam his opponent to the mat. Prazeres transitioned quickly
into the mount, but Taisumov was able to escape immediate danger, even
while remaining on his back. Midway through the round, Taisumov got
loose and to his feet, only to get put back on the canvas. Prazeres
moved into the mount a second time, and while Taisumov was able to get
free, he was still being dominated everywhere by the Brazilian.  Making
matters worse for the Russian was that he deducted a point by referee
Mario Yamasaki for an illegal head kick.

Refusing to take his
foot off the gas in round two, Prazeres dropped Taisumov (21-5) with a
right hand and nearly sunk in a guillotine choke before seeing his
opponent slip free, but “Beckan” recovered quickly. What he was having
trouble with was keeping his hands off the fence, and after several
warnings, he lost a second point from Yamasaki. Prazeres wasn’t running
out the clock though, as he aggressively went after his opponent,
landing several hard punches in the process.

Needing a finish to
win, Taisumov got another stern warning from Yamasaki in the third for
grabbing the fence, and though he finally began to land more
consistently with his strikes, a takedown by Prazeres in the final two
minutes guaranteed that he wouldn’t get what he was looking for.

TUF Brazil season one winner Rony Jason rebounded from his November knockout loss to Jeremy Stephens with a knockout of his own, halting Steven Siler 77 seconds into their featherweight bout. 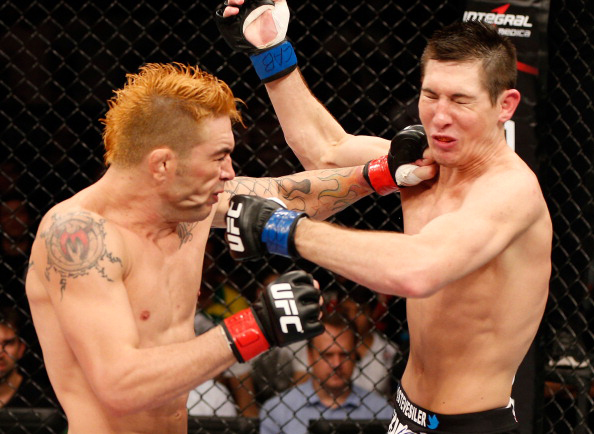 Siler’s
disciplined stand-up attack appeared to be working well early, but a
right hand from Jason staggered the Utah native. A follow-up left hook
dropped Siler to the canvas, but as he began to recover with an upkick,
referee Wernei Cardoso intervened at the 1:17 mark, drawing an immediate
protest from the American, but to no avail.

“I’m disappointed
because it was an incredibly early stoppage by the ref," said Siler. "I
didn’t even have time to communicate I was okay because he jumped in so
fast.  I got hit, dropped to my back to take a defensive posture and was
throwing an upkick to give me some space. And then, all of the sudden,
it was over.  I guess it was my fault for getting hit, staying exposed.”