Dive into the world of one of the most successful MMA gyms in the world: Team Alpha Male
By Zac Pacleb • Jul. 10, 2019

After hopping around Detroit, Michigan, and training wherever he could, Murdock traveled to watch his friend Daron Cruickshank compete on The Ultimate Fighter: Live finale. Urijah Faber coached Cruickshank, and he invited them back to his gym in Sacramento. Soon enough, Murdock found his way to California’s capital and couldn’t help but fanboy as fighters entered the gym.

“Guys just kept popping up on the mat,” Murdock said. “One second, it was Joseph (Benavidez), and then I’d look over, and I’m like, ‘Oh, s***, there’s Chad (Mendes).’ And I was like, ‘These are guys that I looked up to,’ and I just thought the world of them. I still do, but at the time, it was just like I was working alongside them as if it were no big deal.”

At that point, Murdock was just a young fighter looking to make his way in the sport. It’d be years later before he signed a UFC contract to fight in Minnesota (he would have to pull out of his debut fight after not being medically cleared in time), but he was convinced that this was the place he needed to be.

Having a starstruck amateur from Michigan on the mat was a far cry from where Team Alpha Male started, when an eventual UFC Hall of Fame member said it was mostly “just being excited” about building a team with his friends.

That passion has grown into one of the more well-established mixed martial arts gyms, a top-notch facility and a name that draws people from across the world. Recently, 21-year-old Chinese bantamweight Song Yadong scored a Performance of the Night-worthy knockout of Alejandro Perez at UFC 239. Faber watched the whole thing from Song’s corner.

The gym’s pull isn’t reserved just for up-and-comers, though. Established veterans make the trek to the West Coast to polish up their game and evolve. UFC veteran Clay Guida finally made good on a decade-long invite from Faber and has trained out of Team Alpha Male since the end of 2015. He went so far as to call the gym the “MMA Mecca.”

Whether a fighter is long-established or green and wide-eyed, fighters often cite Faber’s name and what he did for the lighter weightclasses as to why they enter the gym. On top of that, they also tout the environment.

“They were very inviting,” Murdock said. “They didn’t outcast me like you would think some of the bigger gyms might have done. They made me feel really at home, and I’ve just been here ever since.”

Though the notoriety is apparent and well-earned, it hasn’t come without its bumps in the road. From coaches and fighters leaving loudly or quietly, such is life for a successful mixed martial arts team. TJ Dillashaw, Joseph Benavidez and Paige VanZant are a few notable names who left and found new homes with varying degrees of drama around the decision. Even so, their time at Team Alpha Male remains part of those fighters’ stories.

“Any team that grows to this size, there’s going to be some fallouts of people leaving,” Murdock said. “That’s one of the things that makes it so special is it has its own place in everyone’s individual journey. I’ve never found a reason for myself to want to go anywhere else. (I) can’t imagine why anybody else would leave, but it’s definitely grown since I’ve been here.”

The gym itself continues to grow as well. In 2017, Urijah Faber’s Ultimate Fitness opened, a gym that includes strength & conditioning equipment, recovery stations, a sauna and of course, anything else mixed martial arts training requires. As the team and facility evolves, though, the intentions remain the same.

“We’ve just been able to tweak throughout the years,” Faber said. “It’s always been a similar recipe of showing up, putting in the hard work, being consistent, being persistent, being relentless and having a really open mind for learning.”

At UFC Sacramento on July 13, Team Alpha Male has six fighters competing, including Faber, who enters the Octagon for his first bout since December 2016. With so many athletes competing, the uptick in energy is tangible to everyone in the gym, and they believe this event is a “tailor-made” showcase for their team and for Faber to show that he does in fact still have the goods.

“The energy is good about me fighting,” Faber said. “I feel like I haven’t really left the room, and that’s been apparent. Whether I’m inside practice, just as a mentor or actually jumping in and competing on the day is kind of up in the air, but it’s exciting to lead by example again.”

Faber’s opponent, Ricky Simon, is an exciting prospect, respects what Faber helped build and said fighters should “model their post-fight careers after what he’s done.” Only a few years earlier, when Simon was in college and competing as an amateur, he made his own pit stop at Team Alpha Male. 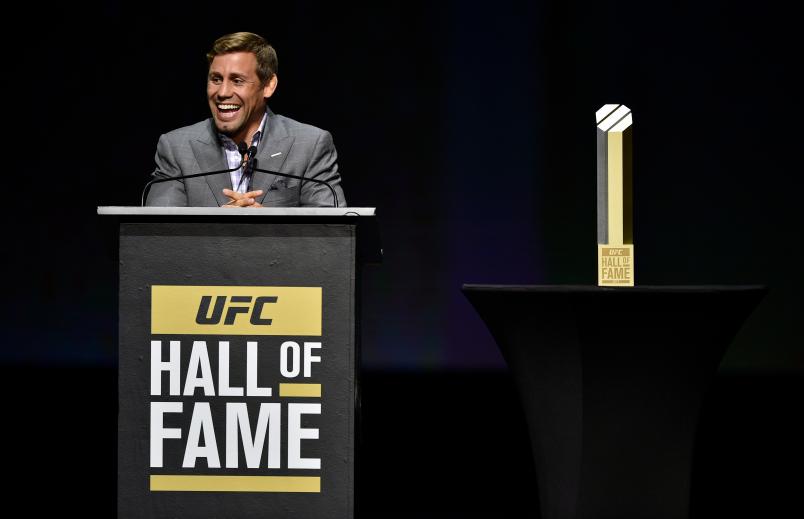 LAS VEGAS, NV - JULY 06: Urijah Faber gives his acceptance speech to the crowd during the UFC Hall of Fame 2017 Induction Ceremony at the Park Theater on July 6, 2017 in Las Vegas, Nevada. (Photo by Jeff Bottari/Zuffa LLC/Zuffa LLC via Getty Images)

LAS VEGAS, NV - JULY 06: Urijah Faber gives his acceptance speech to the crowd during the UFC Hall of Fame 2017 Induction Ceremony at the Park Theater on July 6, 2017 in Las Vegas, Nevada. (Photo by Jeff Bottari/Zuffa LLC/Zuffa LLC via Getty Images)

“They were the best team around,” Simon said. “They were the best small team around at the time, and I went there, and Urijah Faber was super nice. Something I really liked about him – I was in college at the time – and he was very encouraging for me to stay in school. I think he’s done great, great things for his gym. There’s a reason why his gym is successful. He’s doing great.”

Naturally, that respect only goes so far.

Whether there’s more fights in Faber’s future isn’t entirely clear, but he said he is proud of the “awesome” contributions he has helped make to the sport through Team Alpha Male and looking forward to what it will contribute to “the next 20 years and beyond.”

“It’s really been cool to build something that lasts,” Faber said. “It’s funny because if you look around the world, whether the guys are here now or not, a lot of the best fighters on the planet, especially in these lower weight classes, have been out of this gym.”