Even when fighters train at the same gym, that doesn’t necessarily equate to a similarity in style throughout their roster. They all have strengths, weaknesses and tendencies that make up their trends and habits in the Octagon. That said, when someone is coming out of Kings MMA, you’re nearly guaranteed to see a fighter ready to brawl, ready to push the fight and actively seeking a decisive finish, and that trait points to the work in the gym with Rafael Cordeiro.

Cordeiro, a member of the legendary Chute Boxe Academy in Brazil during his own fighting career, opened Kings MMA in 2010, and since then, the Huntington Beach-based gym (which also has three gyms open in Southern California as well as a new El Paso location) has housed several champions, including Fabricio Werdum and Rafael Dos Anjos. The team has gained a strong reputation as one of the most notable gyms in the world, churning out contenders and successful fighters across different promotions.

Currently, some of the more notable fighters working with Cordiero include middleweights Kelvin Gastelum and Marvin Vettori, lightweight Beneil Dariush and flyweight Sabina Mazo. For Gastelum, the opportunity to train at Kings MMA presented itself after he spent time with Werdum, and Cordeiro’s pedigree immediately stood out to him.

“To me, it’s an honor to be training here under master Rafael,” Gatselum said. “There’s a long tradition that goes way back before I ever came here, and I respect that, and I honor that, and I’m just honored to be here, to be a part of it.”

That reputation could be an intimidating for an athlete looking to take the next step in their career, but for Mazo, the atmosphere cultivated in the gym helped smooth out the welcoming process.

Having that kind of atmosphere for athletes is something Cordeiro tries to create, and while his gym produces contender after contender, he approaches things from a different angle. While he felt confident in his ability to teach striking and jiu-jitsu, he knew he needed to gain a better understanding of the wrestling side of the sport.

The mixed martial arts portion is an obviously big part of the gym’s identity, but the core of it is rooted in something else.

“Inside our gym, we have MMA, but our focus is martial arts,” Cordeiro said. “We teach people how they have to live their lives inside the Octagon and outside the Octagon. I think a lot of fighters are lost. As soon as they know about what happens inside Kings MMA, the guys came here. They become a big family.” 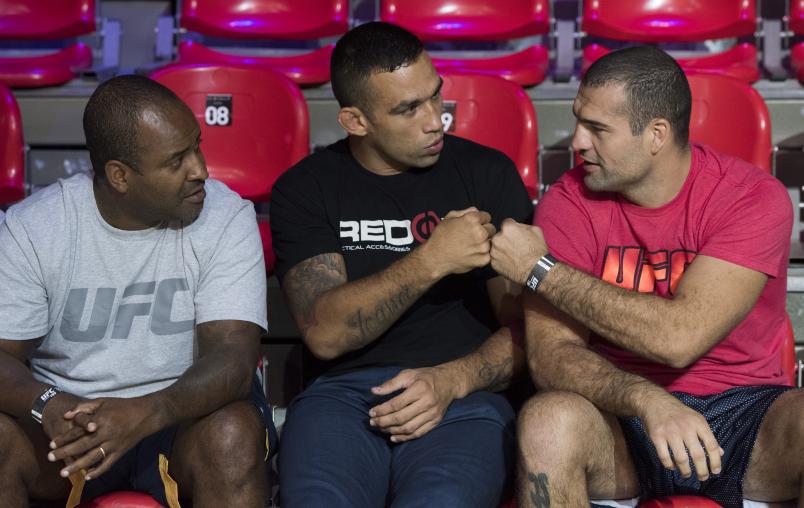 Cordeiro is one of the quickest people in the room to smile, and he credits that to doing something he truly loves. But when it comes time to train and spar, every athlete knows they must go hard for however long the workout goes.

The aggressive and intense sessions are to prepare his athletes’ “minds for war,” and it is another reason so many fighters come to train with him.

“His style of fighting and training is something I was really quick to jump into just because of the style,” Gastelum said. “It’s a really aggressive style, really hard striking style, and it just fit well into my abilities and my style. Like master says, it’s a shark tank out here, and there are no easy days. There are no easy rounds. It’s survival of the fittest every day you’re in here, and so it’s a pretty special place in that regard.”

Ultimately, Kings MMA has built upon a rich martial arts history that includes title fights and championship reigns. The people in the gym take a certain amount of pride in the heart and competitive nature in training and how that manifests in the Octagon.

For Cordeiro, he has been satisfied in breeding the athletes into full martial artists who carry the lessons well beyond their fighting careers. He enjoys seeing the athletes teaching their own classes and opening their own gyms, further rooting the philosophies instilled into them for the next generation.