Food Network star and chef Guy Fieri is a diehard UFC fan, and he has some suggestions for those visiting Minneapolis for this October's FX event... 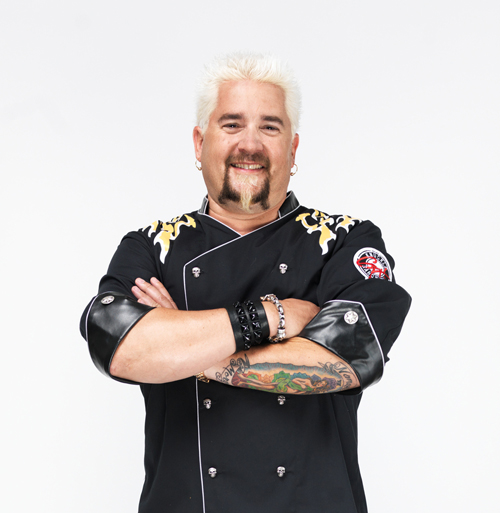 Guy Fieri is not going to lie. He was a little bit skeptical when first told of the existence of a new sport called mixed martial arts back in the mid-90s. Before he was traveling across the country and landing in everyone’s living room through several shows, most notably the Food Network hit Diners, Drive-Ins and Dives, the chef was running a restaurant in Southern California, and a few of his workers were about to open his eyes.

“Around 1994-95, I was running a restaurant in Redondo Beach, and I had these Brazilian dudes that worked for me in the kitchen,” Fieri recalled. “They were really charismatic guys, but real badasses, and they were telling me about this fighting competition that the Gracies - who had a training facility down the street - were in and that it was no holds barred. I said get outta here, it’s fake, it’s got to be wrestling. (Laughs) Then they brought in a VHS video tape and we sat there and watched it and I’m like ‘you’ve got to be kidding me. This is Roman Empire gladiator stuff.’ And I was hooked. The Gracies would even come into this Italian restaurant, and you couldn’t believe the talent and the strength and the fortitude that you had to have to do this.”

It was the beginning of a love affair for Fieri, a lifelong fan of martial arts who took tae kwon do for five years when he was growing up. In mixed martial arts and the UFC, he found a sport that was not only compelling, but one he could see growing right before his eyes.

“You talk about the old school, Tank Abbott, that was my boy,” he laughs, recalling the charismatic brawler who captivated fight fans in the early days of the UFC. “I was running around Huntington Beach back in those days, and Tank was down there, and Tito (Ortiz), and it was so close, it was crazy.”

But like many fans, as much as Fieri enjoyed the sport, the controversy swirling around it in the early years almost made it impossible to consistently check out the fights and see it as a sport with a real future.

“I remember being a fan of this, and it was hit or miss whether or not you were gonna get to see it or be around it because there was so much controversy going on,” he said. “And I said, you know what the controversy is, it’s that no one’s figured out how to put a tag on it yet.”

What followed were the so-called “Dark Ages” of the sport, when it wasn’t readily available for fans to view and previous UFC owners SEG were hitting significant financial trouble. Yet just before the bottom fell out, Frank and Lorenzo Fertitta and their friend Dana White intervened as the new company Zuffa, buying the dying UFC in 2001 and beginning the process that now sees the organization as one of the most successful and popular entities in sports today.

“Thank God for Dana White,” said Fieri of the UFC president. “The guy went against what people said couldn’t be done, and it was gonna go away. I thought it was going away, and I was just blown out that we were gonna lose it. And to see it now on Fuel (TV) all the time, I never anticipated that it would go to this and people would be so into it. People gave it a negative rap. They were saying ‘oh, it’s so violent,’ and it’s not any more violent than the movies kids are watching these days. So no, I didn’t think it would come to this, but I’m thrilled it is.”

If you’ve seen any of Fieri’s shows, you’ll know the enthusiasm and passion he brings to his projects and the world of television. Well, it’s clear from just a few seconds talking about the UFC that he feels the same way about the world’s fastest growing sport.

“When (UFC color commentator) Joe Rogan goes out with laryngitis, I want a shot,” he said. “That’s how much of a fan I am.”

Many in Zuffa’s offices in Las Vegas would say the same thing about being a fan of Fieri, with UFC chairman and CEO Lorenzo Fertitta making sure that the promotion’s stop for an FX show on October 5 – Minneapolis, Minnesota – got the DDD seal of approval from the host before giving the green light for the event headlined by the heavyweight bout between Travis Browne and Antonio “Bigfoot” Silva.

“My camera crew, Matchstick Productions, is based out of Minneapolis, so it’s always nice to shoot in your hometown,” said Fieri, whose own homebase is in Northern California. “The second piece is, you show me a place where it’s cold and where it has a strong ethnic population and cultural diversity, and I’ll show you a place that’s coming up with some crazy food. Because when it’s cold and it’s snowing outside, what do you have time to do? Watch UFC and eat good food. So I find that the places that are really hot and the places that are really cold, we have a tendency to find some really dynamite food. Don’t get me wrong, we find great food all over the country, but in particular in Minneapolis, there are some killer restaurants and some of my favorites.”

And while spending time with his wife and two sons and his hectic travel and filming schedule have kept him from attending a live UFC event, he is a regular viewer on Pay-Per-View and cable, and he has made it out to the shows in his area presented by one of the UFC’s top contenders during his time in the Octagon, David “The Soul Assassin” Terrell.

“Dave is an awesome guy and he has the great Nor-Cal Fighting Alliance Center up here,” said Fieri. “He has put on a couple fights here in Sonoma County and I just went to one three, four months ago, and it’s just awesome to see the guys have a chance to get a shot at it and go after it. It was killer.”

So little has changed for Fieri since his first exposure to the sport all those years ago. Well, little has changed in terms of him being a diehard UFC fan. As for everything else, it’s safe to say things are a bit different, but the way he sees it, he hasn’t changed the way he does things. It’s just that now everybody else is along for the ride.

“I love it because it’s just me being me, hanging out, eating food, and talking about food,” he said. “And the fact that it’s become so popular, I’m so appreciative, and I’ve got the best fans in the world. It’s so amazing that you can do a little cable television show and it can change the lives of people. We’ve been to over 500 locations, and it changes lives. It’s changed the economic profile of their family and their life and their restaurant forever. It’s awesome and it’s great to be that guy. It has its price – traveling is tough and being away from my wife and kids is really tough, but knowing that it’s doing such a great thing for the industry that I love is worth it.”

And as far as he’s concerned, the key to his success comes down to being honest with his viewers week in and week out.

“You like the fighters you like,” said Fieri, comparing it to being a fight fan. “And you gotta be real about it. You’ve got to like a fighter even when he loses. I’m a big Brock Lesnar fan, and to see him lose, I was just devastated. But if you’re a fan, you’re a fan. So it’s got to be real, and we’ve got too many things where people are not being real and doing things for sensationalism and being negative for sensationalism. If the food ain’t real, if the situation isn’t real, you’re not gonna see it. I’ve got a reputation as a chef, and even more of a reputation as a dad to my two boys. I don’t want my kids to have their dad being some sell-out that every place he goes to is the best place in the world. Have we walked? Absolutely. Have we had shows that we shot and then realized after we went back and reviewed it that it wasn’t working? Absolutely. Does it happen often? No. Did it used to happen? Yes. When we first got started, we didn’t have all the kinks worked out, but it’s either real deal or no deal.”

Sort of like the UFC. And Guy Fieri wouldn’t have it any other way.

When it comes to chowing down in Minneapolis, Fieri says “There’s not a place I wouldn’t recommend.” But here are a few of his favorites for fight fans heading into town for October 5th’s UFC on FX event at the Target Center. One warning though: “You’re gonna need an extra three or four days when you go for the UFC fights just to check out the great food in Minneapolis,” said the Diners, Drive-Ins and Dives host.

Nye’s Polonaise - http://www.nyespolonaise.com/
“You’ve got to go to Nye’s Polonaise. Nye’s is this throwback joint, and when we would go into town to shoot the show or visit or have meetings, we would end up there. So I would always go there because they have this crazy polka band and the drinks were great, and I was always there until late, but I never got to eat the food. Then finally I ate the food and I was like ‘this is crazy.’ So you’ve got to try Nye’s. Killer food and they make it all from scratch.”

Pizzeria Lola - http://www.pizzerialola.com/
“Pizzeria Lola, awesome place. This girl makes pizza in this French pizza oven that cooks super hot. I was there with my buddy Andrew Zimmern, who’s a great chef, and we were there. The pizza she makes is out of bounds.”

Smack Shack - http://smack-shack.com/
“Smack Shack is a little restaurant inside of the 1029 Bar, and they do a lamb sandwich there that will blow…your…mind.”

Kramarczuk’s - http://kramarczuk.com/
“Kramarczuk’s is almost right across the street from Nye’s. And these guys make this Eastern European food, anything you can imagine, from stuffed cabbage to sausage to borscht. You can’t beat it. Outstanding place and they do it all themselves.”