Gutierrez To Showcase A Different Fighter

"I know the things that I needed to work on and I’ve been doing it, and you’re gonna see a different person. I’m in a much better place physically and mentally, so I’m ready to showcase that.”
By Thomas Gerbasi • Mar. 22, 2019

Life isn’t perfect for Chris Gutierrez these days, but it’s better than it was last November, when a dream call-up to the UFC turned into a nightmare in the space of the nine minutes and 12 seconds it took for Raoni Barcelos to hand the bantamweight a submission defeat at the TUF 28 Finale in Las Vegas.

“I was going through my own little struggles and, unfortunately, the day of the fight my own emotions overtook me and I didn’t get to perform,” Gutierrez said. “I was upset and disappointed in myself. But this time around, I know the things that I needed to work on and I’ve been doing it, and you’re gonna see a different person. I’m in a much better place physically and mentally, so I’m ready to showcase that.”

On Saturday, Colorado’s Gutierrez gets a second chance to make a first impression when he faces Ryan MacDonald in Nashville. He’s still fighting a custody battle for his year-and-a-half-old son Adrian, but he’s learning how to use that fight as fuel when the Octagon door shuts, and not a distraction.

“It’s hard to explain it, but fighting is the realest thing you’ll ever do,” he said. “It’s just you and another person. You don’t have teammates, you can’t tag someone to help you if you’re getting beat up. And the cage is only so big, right? You have yourself, you have an opponent and then you have a ref in there. So the cage gets small pretty quick. And on top of that, you have your own emotions pulling you down, dragging you one way or another, and you’re not thinking freely. You’re thinking about problems, thinking about other things rather than the fight. And you should be a hundred percent focused and zoned into the fight.” 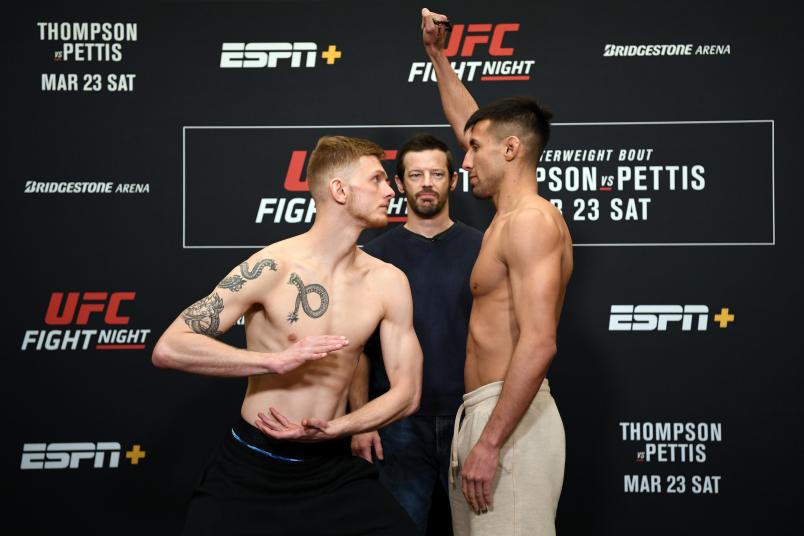 We almost forget that will these athletes are superheroes on fight night, they’re also human beings with the same concerns and issues everyone deals with. But what makes them UFC fighters is the ability to deal with those issues and put them out of their mind for 15 or 25 minutes. And for many of them, that’s the beauty of the sport, that for the time in the Octagon, nothing else is more important than the fight at hand.

“It’s very true,” Gutierrez said. “For the 15 or 25 minutes that I’m in there, even with all the chaos, I’m free for that moment. You don’t have anything in the world that matters. It’s just you versus you, really. There is no opponent; it’s just the man in the mirror. Your mind can be your biggest weapon or your biggest downfall. And when I’m in the right place, I’m a force. And it’s like that with anybody. If you put your mind to it, you’re unstoppable. And I truly believe it.”

Owner of a 12-3-1 pro MMA record, it’s clear that more often than not, Gutierrez has been able to find his peace on fight night and get the job done. And while the Barcelos bout was a disappointment, the 27-year-old did take away some valuable lessons that he will carry not just into Nashville, but into the rest of his career.

“You have to learn to enjoy the process and be one with it,” he said. “Admire the moment and smell the roses because we’re so eager and anxious to get into the fight, and when it’s finally done, win or lose, you’re like, that’s it? I didn’t enjoy everything that came along with it – the connections that I’ve made, the people that I’ve met, the people you’ve inspired or helped or that helped you. You’ve got to take all that in. And enjoying the process makes the end result that much sweeter.”

As far as that goes, Gutierrez admits that it’s “easier said than done,” but he’s working on it. And he’s got a good team behind him in Factory X in Colorado, whose head coach Marc Montoya told him, “If you fix your outside life, your fighting life and everything will come together. If you can be a better man for yourself, everything will fall into place.”

“It’s so true,” said Gutierrez, who has no time for the problems of the past. He’s all about the future, and it all starts this Saturday.

“I know I’ll be a world champion one day, but first things first,” he said. “I’ve got to take care of business March 23rd and continue taking care of business trying to get my son back in my life. Those are the two priorities on my list right now.”