Gutierrez Doesn't Fight For Himself

"I have a family - my mom, my dad, my brother and most importantly, my son. That's who I fight for. I fight for every person who's going through something in life."
By Thomas Gerbasi • Aug. 9, 2019

A fighter’s first UFC victory is always a special moment, but Chris Gutierrez needed his March win over Ryan MacDonald more than most.

“I knew I had to get the job done and I needed to get the win,” said Gutierrez, who evened his UFC record at 1-1 with the decision over the previously unbeaten Canadian. “You can only lose so many before you get kicked out, so I knew I had to win, but it wasn't just for me. I no longer fight for myself; I was a selfish kid back in the day and I used to fight just for me. I don't do that anymore. I have a family - my mom, my dad, my brother and most importantly, my son. That's who I fight for. I fight for every person who's going through something in life, especially single fathers who are going through what I'm going through. I fight for people who have gotten their dreams taken away from them because they were told they weren't going to be anything in life.”

Gutierrez knows what that feels like, told multiple times to give up his fighting dreams because the odds of him making it were slim and none. But he persevered, compiling a 12-2-1 record that earned him a call to the UFC. Then he lost his debut to Raoni Barcelos in a little over four minutes. Add in the grueling custody battle for his two-year-old son Adrian, and it’s remarkable that he even made it to Nashville ready to fight earlier this year.

But that’s the thing. As stressful as a professional mixed martial arts fight is, for those in the heat of the battle, it can often be the only place to find peace for 15 minutes or less.

“I look at the beautiful things in life and I take with me the urgency of loving my family,” he said. “Coach (Marc Montoya) is very big on taking the right things into the cage with you, the right emotions. And all the negative things that I'm going through, I think of that as fuel.”

That fuel took Gutierrez through three rounds with a talented prospect expected to beat him and with that victory in his back pocket, the 28-year-old from Colorado can move forward, and in this case, forward is a trip to Montevideo, Uruguay to face Brazil’s Geraldo de Freitas on Saturday. For Gutierrez, it’s a nice break from the stresses of home, and a chance to get in touch with his roots as someone of Guatemalan and Colombian descent.

“I love it,” he said. “I feel like I'm going home. I have a sense of peace going in with me. I have two countries on my side. He's got Brazil, I've got Guatemala and Colombia.”

Gutierrez also has his mind right, something that wasn’t always the case, especially in the days following his move to Colorado in the summer of 2017. Things were good on the fighting side as he linked up with the Factory X squad, but his personal life was falling apart as the custody battle with his ex-girlfriend began, leading to legal woes and even worse as he hit rock bottom one night and pondered suicide. 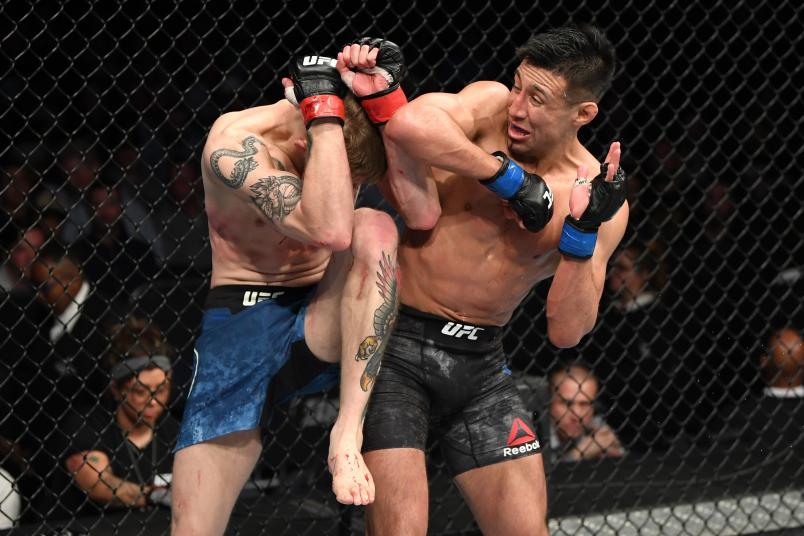 Gutierrez soldiered through that dark night a year and a half ago, found religion, and while things aren’t perfect, they’re better than they were.

“From where I was a year and a half ago to where I am now, I've made leaps and bounds. Life is still throwing some curveballs at me in this particular situation, but everything else in my life is going good.”

“The one thing going wrong is the issue with my son, but that one issue is my whole life.”

When Gutierrez talks about Adrian, you can hear the tone in his voice change, and one look at his Instagram account shows how much he cares for his son and wants to have him back in his life. Unfortunately, that’s a battle out of his hands at the moment, but he’s staying as strong as he can and focusing on what’s ahead of him.

“If I'm gonna be successful, I gotta start thinking of positive things,” said Gutierrez. “I don't want to go backwards in life. And the more you win, the easier life gets in certain ways. For instance, this stuff that I'm going through, I need money to pay these lawyers, so the more you win, the easier that gets. But it's not just about the money. I want to work myself up the rankings, I want to be a world champ, and I want to be one of the greatest to ever do it. That's what we're in this sport to do.”

“I'm like a buffalo,” he said. “If you've ever seen a buffalo when there's a storm coming, they run through the storm. Everything else runs away.”

“I had a dream the other day that I finally got custody and I got to bring my son into the Octagon with me for one of my fights,” he said. “That was a pretty nice dream.”