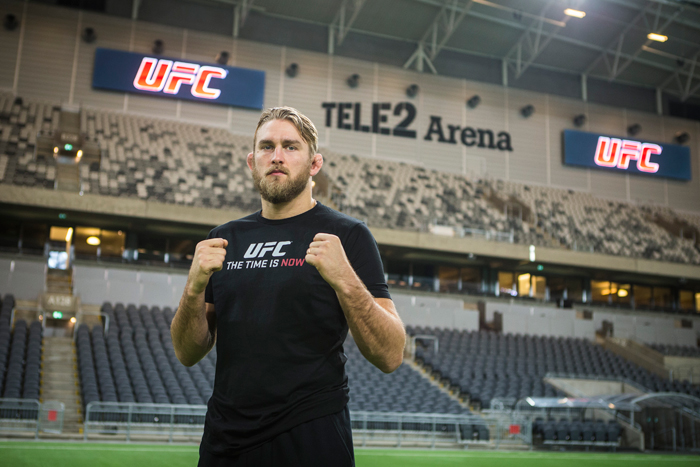 Las Vegas, Nev. – History will be made when Swedish superstar and No. 1 ranked light heavyweight contender Alexander “The Mauler” Gustafsson meets No. 3 ranked knockout artist Anthony “Rumble” Johnson on Saturday, Jan. 24 in Stockholm, Sweden to determine the next UFC® light heavyweight title challenger.

The bout will take place in front of more than 30,000 fans at the Tele2 Arena in Stockholm, marking just the second major stadium event in UFC history and the first in Europe. The previous stadium event was the record-breaking UFC® 129 held at Rogers Centre in Toronto, Canada, as more than 55,000 fans watched Georges St-Pierre defeat Jake Shields.

Gustafsson narrowly lost his title bid to reigning champion Jon “Bones” Jones in the greatest light heavyweight title fight of all time in Sept. 2013. Now, the rejuvenated 27-year-old will look to draw off the support of a massive hometown crowd when he meets Johnson, a winner of eight straight, including a devastating knockout win over Antonio Rogerio Nogueira in his last bout.

“This is going to be an epic event,” Gustafsson, who defeated Jimi Manuwa in his last bout in March, said. “I want more than 30,000 fans to come and witness me win on January 24. Then I’m going to go and get the title! My journey back to the top starts now. ”

“This fight might be on his home turf, but I’m ready to go over to Sweden and prove that I’m the next in the line for the UFC light heavyweight title,” Johnson said. “I’m not intimidated by fighting in front of Alex’s hometown fans. I’m going to go in there and look for the knockout like I do in all of my fights. I can’t wait for this!”

Tickets for the historic UFC FIGHT NIGHT: GUSTAFSSON vs. JOHNSON event will be available to the general public on Friday, Nov. 28 via AXS.com/UFC.  Guarantee your seat by booking an Official UFC VIP Experience starting this Friday, Nov. 14 at 11 a.m. GMT via UFC VIP or Tailor Events.

VIP Experience packages includes the opportunity to step inside the Octagon™ and raise the UFC championship belt, coveted floor seats, hospitality and an official event poster signed by the fighters.

UFC Fight Club® members will have the opportunity to purchase tickets to this event Wednesday, Nov. 26 at 10 a.m. GMT via the website www.ufcfightclub.com. A special Internet ticket pre-sale will be available to UFC newsletter subscribers Thursday, Nov. 27 starting at 10 a.m. GMT. To access this presale, users must register for the UFC newsletter through UFC.com.