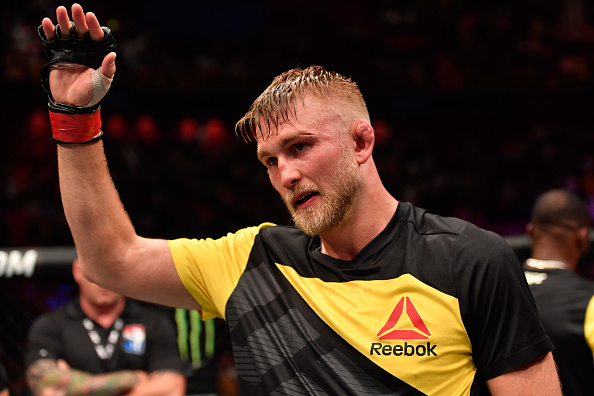 Sweden’s Alexander Gustafsson has participated in two of the greatest light heavyweight title fights in UFC history, and on Sunday in front of his hometown fans at Ericsson Globe in Stockholm, “The Mauler” may have set the stage for a rematch with the winner of July’s bout between Daniel Cormier and Jon Jones, as he knocked out Glover Teixeira in the fifth round of their UFC Fight Night main event.

More importantly, Gustafsson also left the Octagon with a future bride, as he proposed to his girlfriend Moa following the victory. And she said, “Yes.”

As for the fight, “The Mauler” was in top form throughout against a veteran foe.

“I hit him with bombs and he took every shot,” Gustafsson said of Teixeira. “He’s a great fighter, it’s an honor to fight him here at home in Stockholm.”
CLICK HERE FOR THE FINAL RESULTS FROM STOCKHOLM

After a brief feeling out process, the two top light heavyweight contenders exchanged at close range before a slam to the mat by Teixeira. Gustafsson jumped back to his feet immediately and landed a couple hard strikes before eluding return fire from Teixeira. An inadvertent eye poke from Gustafsson brought a momentary halt to the action just past the midway mark, but “The Mauler” got right back to work, landing hard shots and then getting out of the way before Teixeira could respond. The uppercut was the Stockholm product’s weapon of choice, and he was looking sharp in an impressive opening round.

Teixeira was clearly having trouble closing the distance on Gustafsson, but he was able to land a shot that opened a cut over his foe’s left eye. Gustafsson got even by bloodying the Brazilian’s nose, and with three minutes left, a spinning elbow was followed by a barrage of blows that staggered Teixeira. Teixeira weathered the storm, but Gustafsson was getting more confident with every landed blow, and there were more and more of those.

With Gustafsson’s combinations scoring beautifully, it was no surprise that one of them put Teixeira on the deck 30 seconds into round three. Gustafsson moved in for the finish, and his thudding elbows kept doing damage. But Teixeira fought back, got loose and made it back to his feet, only to get taken down by Gustafsson, who kept delivering the punishment until the fighters rose midway through the frame. With a minute left, Gustafsson landed the uppercut again, with Teixeira taking it then waving his foe on before firing back with hooks at close range.

Even with Gustafsson’s movement slowing down in round four, he was still able to punish the gutsy Teixeira, who kept chasing his foe, hoping to land the shot that would turn everything around. The finisher didn’t come for Teixeira, but it did for Gustafsson a minute into the fifth and final frame, as two uppercuts staggered Teixeira before a right hand finished the bout, with referee Marc Goddard stepping in at 1:07 of the round