Gustafsson not feeling pressure of fighting at home

Midway through his answer, Alexander Gustafsson apologizes for the loud noises and commotion in the background.

Stuck in a hotel room with too many hours still remaining until he’ll step in the Octagon with Glover Teixeira on Sunday night at the Ericsson Globe Arena, Gustafsson’s coaches are restless and harassing the light heavyweight contender while he’s on the phone seems like as good a way as any to expend their pent up energy.

He picks up right where he left off, but asks for a minute before the next question.

“Guys,” he says in his normal speaking voice before the tenor and tone change on the follow-up.

The din of background noise disappears.

“Sorry; Joakim Karlsson is one of my coaches and he’s weird,” he says. “They’re bored. Everybody is bored.”

The ease has returned to Gustafsson’s voice and is a grand departure from not only the stern growl that stopped Karlsson and his accomplices from pestering the 30-year-old light heavyweight standout moments earlier, but also from the way he sounded before and after his last appearance in Stockholm.

Paired with Anthony Johnson in the main event of a UFC on FOX event at the Tele2 Arena two years ago, facing the dangerous knockout artist in a title eliminator in front of a massive partisan crowd seemed to weigh on Gustafsson. His epic battle with Jon Jones at UFC 165 made him a superstar and with an increased profile comes increased expectations, both external and internal.

The bout with Johnson was to determine the next title challenger in the light heavyweight division and a victory over “Rumble” would not only secure the Swedish standout a rematch with Jones, but also send the more than 30,000 spectators who packed the arena into hysterics. 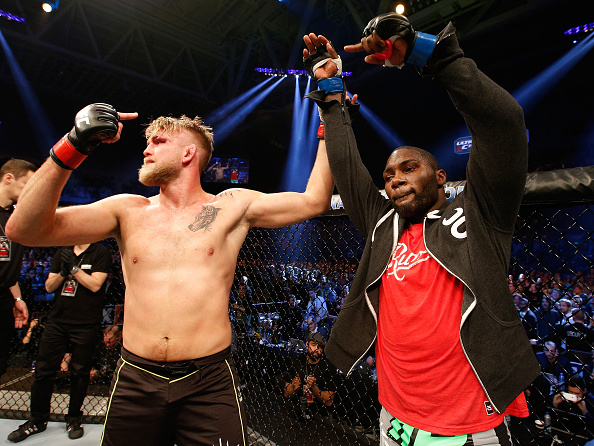 A little over two minutes into the opening round, the Tele2 Arena fell silent as Gustafsson fell to the canvas and the bout came to a close.

The sudden stoppage loss to Johnson hurt far more than any previous setback Gustafsson had endured. He apologized to the fans and his country. He pondered retirement.

Even in the build up to his return – a second championship classic, this time with Daniel Cormier, at UFC 192 – the weight of what had transpired earlier in the year still seemed to hang over Gustafsson.

That’s not the case this time around.

“I feel comfortable. I feel motivated. I’m not nervous,” says Gustafsson. “I don’t feel any pressure at all; it’s just another day at the office.

“I’m feeling good – it’s a highlight for me to fight in my hometown every time. It’s an amazing feeling and a big motivation for me.”

While some would chalk those answers up as pull quotes from the “Athlete 101 Handbook,” Gustafsson delivers them without the “I’m trying to convince myself this is true” vibe that often accompanies those types of pre-fight declarations.

He sounds genuinely at ease just a few days before returning to the Octagon to face Teixeira, another veteran finisher. If there are any lingering demons he still hopes to exorcise on Sunday night, Gustafsson isn’t letting it show.

Overall, he’s not really too fussed about what happened in the past in general.

“I don’t look back too much,” says the 30-year-old contender. “I think everything has a reason and I believe that that’s how you develop as a person.

Eleven months after coming out on the wrong side of a split decision in his championship clash with Cormier in Houston, Gustafsson returned to action, stepping in with Polish veteran Jan Blachowicz in Hamburg, Germany.

It was the first time since his dominant decision victory over Mauricio “Shogun” Rua nearly four years earlier that Gustafsson wasn’t in the main event and after a sluggish start, he turned to his wrestling and outworked Blachowicz on the canvas to collect his ninth UFC victory and add another inverted triangle to the collection that adorns his right bicep.

It was the type of performance the perennial title challenger begrudgingly admits he needed – a good win over a tough out that not only reminded him of what he’s capable of inside the Octagon, but that also set the foundation for a strong training camp and has him chomping at the bit to get in the cage with Teixeira this weekend.

“It was a good fight; Jan Blachowicz is a very tough opponent and I felt it was a good way for me to just test myself and I did great,” he says. “I won the fight and now I’m here and I’m about to fight the No. 2 ranked guy in the world.

“I’ve been preparing, training with the best guys in the world. I’ve had the best camp so far and I feel super-excited for it and I can’t wait. I can’t wait to fight him.”