Gunnar Nelson: 'This is a Dream Come True'

"I’ve fought in Dublin so many times and it’s like a second home for me
really. I spend a lot of time there training and being able to compete
in the UFC in Dublin is huge." - Gunnar Nelson

There are tons of people excited for the UFC’s return to Ireland this week.

After five years without an event and plenty of pleas to UFC President Dana White, the Irish fight fans are finally getting their wish for a sophomore show in Dublin, and their exuberance has been on display since the day the event date was announced. Within minutes of tickets going on sale, the O2 Arena was sold out for Saturday’s 10-fight event that airs exclusively on UFC FIGHT PASS.

Headliner Conor McGregor was talking about this moment (and myriad other subjects) prior to making his UFC debut. Two wins and one opponent change later, “The Notorious” will be the last man to make the walk from the backstage area into the Octagon and the crush of cheers that will fill the venue as the charismatic featherweight marches to the cage with the Tricolor on his back is bound to be deafening.

Ultimate Fighter Season 19 semifinalist Cathal Pendred has been harboring the same dreams as his more boisterous teammate McGregor, having stood in the audience at UFC 93 a month prior to his professional MMA debut and told himself that he would be a part of the line-up the next time the organization came back to his hometown.

The same goes for undefeated newcomer Paddy Holohan, who makes his organizational debut on home soil against Josh Sampo, and 34-year-old veteran Neil Seery, who impressed on short notice in his first UFC appearance against Brad Pickett back in March.

You can count Gunnar Nelson among the many that are amped up for Saturday’s return to Dublin as well.

The unbeaten Icelandic welterweight has been connected with John Kavanagh and his Straight Blast Gym Ireland (SBGi) in Dublin for nearly a decade, establishing a kinship with the highly respected coach and many of his students, including those taking part in this weekend’s event.

“John came over to Iceland like 2006, and it was only maybe a year later that I went over there and started training with him,” offers Nelson, explaining the origin of his relationship with Kavanagh. “We immediately became very good friends and ever since then, I’ve been spending a lot of time in Dublin training with him and it has taken my game up to the next level.

“Being able to train with all his guys is a privilege not everybody gets, especially me coming from Iceland, where we didn’t really have much here. There weren’t many guys training back in the day when I started, so being able to go over there and train with those guys was crucial for my career.”

Tabbed as one of the top welterweight prospects in the sport prior to his arrival in the UFC, the soon-to-be 26-year-old has validated that standing over his first three appearances in the Octagon, earning victories over DaMarques Johnson, Jorge Santiago and, most recently, Omari Akhmedov to break into the Top 15 in the divisional rankings.

Just as he has made steady progress climbing the ladder in the 170-pound weight class, Nelson has also incrementally worked his way up the bout order as well, debuting on the preliminary portion of the card for his win over Johnson before graduating to the main card for his bouts with Santiago and Akhmedov.

Saturday, the Brazilian jiu-jitsu black belt under Renzo Gracie moves higher up on the fight card once more, landing opposite Zak Cummings in the co-main event of the evening. Combined with the opportunity to fight alongside his long-time training partners in very familiar surroundings, it’s enough to get the traditionally laid back and soft-spoken Nelson fired up… or at least talking about being fired up.

“It’s awesome to be the co-main event,” he says with only a slight uptick in excitement from his standard delivery. “It’s huge and being able to share it with my teammates – Conor McGregor, Cathal Pendred and Paddy Holohan – is even greater. I’m very excited for this card. I think it’s going to be huge and I know it’s going to be a great night.

“I’ve fought in Dublin so many times and it’s like a second home for me really. I spend a lot of time 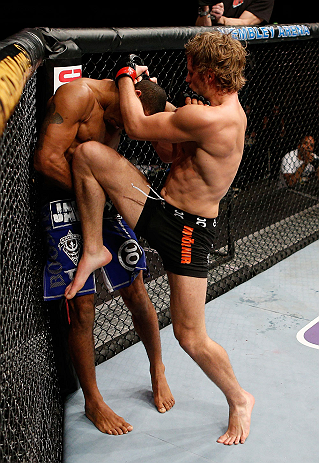 there training and being able to compete in the UFC in Dublin is huge. I’m very excited and the fans are unbelievable. I think this card is going to be crazy.”

Nelson was initially scheduled to face unbeaten American Ryan LaFlare in a pairing of two of the welterweight division’s top emerging talents, but the Long Island native was forced out with an injury.

In his place, the UFC tabbed Cummings, who has gone 2-0 since dropping to welterweight after competing on Season 17 of The Ultimate Fighter in the 185-pound ranks. Following a slick first-round submission win over Benny Alloway in his organizational debut, Cummings played spoiler against grappling standout Yan Cabral, handing the Brazilian his first career defeat.

While some changes can force a fighter to make significant adjustments in the middle of camp, Nelson says there are a lot of similarities between his former and current opponent, and though he’s disappointed about not getting to test himself against LaFlare, he’s looking forward to sharing the cage with Cummings on Saturday night.

“Of course I would have loved to fight Ryan, but this stuff happens and you just have to go with it. I’m also honored to fight Zak Cummings,” says the respectful Nelson, who welcomed his Irish teammates to his home gym Mjolnir in Reykjavik for this training camp. “If you want to compare them, (Cummings is) more experienced, but Ryan LaFlare has no losses and is ranked higher.

“All these guys are very good and they’re actually quite similar I think (in terms of) how they fight. They’re strong wrestlers, both southpaws – so there are some similarities. These things happen and you just deal with it. I’m excited to fight Zak Cummings.”

Nelson is not the type to get hung up on game plans and his opponent’s strengths and weaknesses anyway, telling me prior to his fight with Akhmedov that “(he likes) the idea of going in there and being able to figure out what to do and overcome while I’m in the cage - not to pretend that you’re all that prepared for this.”

Rather than focusing on what Cummings will do and laying out an extensive strategy for how to attack him, the 12-0-1 welterweight dark horse is soaking in the atmosphere and excitement surrounding this card and reflecting on an opportunity that marks the culmination of a long-term dream for himself and his teammates.

“Me and Conor have known each other for a while now and we’ve always worked well together,” he says of the spirited featherweight headliner whom he shares a lot of similarities with. “Our styles are kind of different, but we’re able to learn from each other very well. He picks different things up than I do and then I can learn from him and he can learn from me – we’re able to roll really well.

“To be on the same show now and to be headlining the show – he’s the main event, I’m the co-main event – it’s like a dream come true, really. All this time, we’ve had our eyes on this and have been helping each other – all the guys on the team, really – and now it’s come to this.

“It’s huge. It really is like a dream come true.”