Guida: Sanchez Fight "Was a Spectacle"

“The fans won in that one,” said Guida. “It was a spectacle. There were like three or four Fight of the Nights leading up to that one. When you fight in a place like that, there’s no better venue. It was unreal. Everybody won.”
By Thomas Gerbasi • Jun. 14, 2019

No one got to see the third bout between Rocky Balboa and Apollo Creed. But a select few in an Albuquerque gym did get to witness a rematch of the 2009 classic that matched Clay Guida with Diego Sanchez.

“He (Sanchez) came back to Jackson’s a year or two after our fight when I was training out there,” said Guida, whose official bout with the “Nightmare” will be inducted into the UFC Hall of Fame’s Fight wing in July. “It was his first week back and my first week back for another camp and it happened to be sparring day. That was the first time we had ever trained together and we went one round and everybody stopped and watched.”

What happened in the next five minutes put a halt to all activity in the gym as Guida and Sanchez commenced with round four of their friendly – but intense – rivalry.

GUIDA VS SANCHEZ FIGHT INDUCTED INTO UFC HALL OF FAME

“All these top level guys stopped and watched us do one five-minute round and it was literally like the first round of the fight,” recalled Guida. “Afterwards, we started laughing with each other. And that was the last time we ever sparred. We trained jiu-jitsu and wrestled, but never sparred. You can’t put a price on an experience like that.”

You can’t put a price on the 15 minutes of fury the two shared in the Pearl at The Palms in Las Vegas nearly a decade ago, either. Suffice to say it was a special night.

“The fans won in that one,” said Guida. “It was a spectacle. There were like three or four Fight of the Nights leading up to that one. When you fight in a place like that, there’s no better venue. It was unreal. Everybody won.”

With both Guida and Sanchez sporting three-fight winning streaks heading into their bout, anticipation was high and the winner was expected to challenge BJ Penn for the UFC lightweight crown. Those were just the stakes. From a pure stylistic standpoint, Armageddon in short pants was expected, and “The Carpenter” and the “Nightmare” delivered.

And despite the intensity of the fight and everything around it, there was no bad blood between the combatants.

“There was no bad blood whatsoever,” said Guida. “I’ve always had the utmost respect for Diego and I still do. That was just one of those fights. Every once in a while there’s a time and a place for a fight like that, and that was the time and place. It was meant to happen and the timing couldn’t have been better. We were both on a collision course for the belt – we were young in our careers and we were taking down some top contenders and the belt was in our sights. It was a super challenging time in the lightweight division and that fight was one that will be remembered for the intensity, for the blood, for the non-stop action, for the knock down, drag ‘em out, big swinging exchanges and the takedowns. You go down the list – it was a full-on mixed martial arts display from beginning to end. There was no break in the action.” 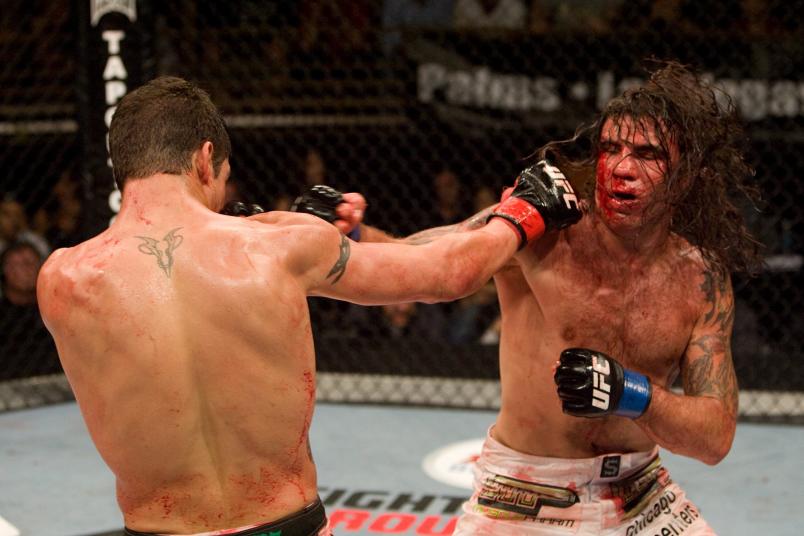 The three-rounder couldn’t be described any better. When it was over, Sanchez took the fight via split decision, but like Guida said, there were no losers that night. A decade later, this epic is going into the UFC Hall of Fame, and Guida couldn’t be prouder.

“That one was so intense,” he said. “I could hear my mom, I could hear my coaches and I could hear the fans. It was non-stop, people stomping their feet, and sometimes you know you’re in a barnburner and you have to be able to block everything else. I treat every fight like a wrestling match, but that one was a tornado and we were in the eye of the storm. There was no sitting on the outside, no resting; it was head-to-head, two rams going at it, and whoever was gonna stand in the battle long enough was gonna get their hand raised and that’s what happened.”