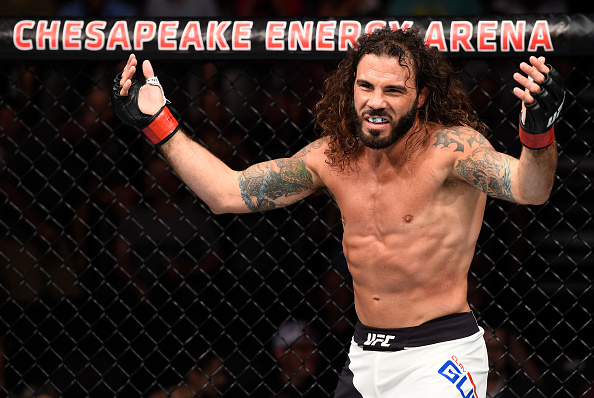 Back in the lightweight division for the first time since 2012, Clay Guida looked like his old self in his Sunday prelim bout against Erik Koch, snapping a two-fight losing streak with an impressive unanimous decision victory at Chesapeake Energy Arena.

Guida looked sharp in the first round of his return to 155 pounds, as he pressured Koch for five minutes. The Milwaukee product was able to elude Guida’s takedown attempts, but he wasn’t able to get his offense in gear while Guida pressed the action and landed some wild strikes as well.

The takedown came early in round two for “The Carpenter,” and Guida swarmed, getting into the mount with 2:45 to go. A barrage of ground strikes followed, but Koch was able to make it out of the round.

The smothering Guida dumped Koch to the mat once more in round three, and Koch had no answers for the veteran’s ground attack, allowing the Illinois native to ground and pound his way to victory.

Italy’s Marvin Vettori put in a workmanlike effort in outpointing Brazil’s Vitor Miranda over three rounds in their middleweight bout.

There was no shortage of action in the first round, with Miranda (13-6) firing off kicks and Vettori (12-3) busy throughout with his punches. With 90 seconds left, Vettori was able to catch a kick and use it to score a takedown, adding to his point total.

Miranda put the pressure on in the second and third rounds, his cardio strong as he put Vettori on his back foot. But eventually, the Italian got back in his offensive groove with his striking as well as takedowns that earned him the win by tallies of 30-27 twice and 29-28.

Esparza got her first takedown midway through the opening stanza, and while Moroz attempted to lock in a guillotine choke, Esparza’s defense was solid, and with a little over a minute left she got free and began scoring with her strikes.

It took Esparza a little longer to get the takedown in round two, but once she did, she continued to control the action, allowing her to pull into the lead in what had been an even round on the feet.

Little changed in the third, with fairly even standup action being broken up by an Esparza takedown. With less than 90 seconds remaining, referee Mario Yamasaki restarted the action, but the former champion got the bout right back to the mat, securing the victory by scores of  30-27 and 29-28 twice.

In his first fight since a horrific motorcycle accident, lightweight Darrell Horcher got the victory over Devin Powell via split decision.

After staying patient on the feet in the early stages of the opening round, Horcher was able to turn a Powell takedown attempt into a top position spot, and he was able to keep that position for the remainder of the frame.

In the second minute of round two, Horcher stunned Powell (8-3) with two left hands, bloodying his nose. A subsequent choke attempt came up empty, but he remained in control against the fence, and when the two broke, Horcher put Powell on the deck with another left hand and took control there again.

After another solid start to round three for Horcher (13-2), Powell finally saw some daylight as he began fishing for submissions on the mat. Horcher’s defense on the mat was solid, but he nearly got caught in a guillotine as they stood. But Horcher was able to get free and lock up the win by scores of 29-28 twice and 28-29.

In a meeting of featherweight newcomers, Jared Gordon picked up an impressive second-round TKO over Michel Quinones.

Looking to make an impression immediately, Gordon and Quinones came out firing, Gordon with his punches and Quinones with his kicks. In the second minute, Gordon switched things up with a takedown, but midway through the round, Quinones had fought his way back to his feet, and the two remained there for the rest of the frame.

Gordon’s pressure put Quinones on the defensive in round two, with the New Yorker able to score the takedown and get to work. Midway through the round, Quinones rose, but Gordon pushed him into the fence and fired off punishing blows before getting another takedown. This time, Gordon put the heat on, and after several unanswered shots, referee Keith Peterson stepped in and stopped the fight. The official time was 4:24.

Midwest lightweight rivals Tony Martin and Johnny Case settled their score in an entertaining three-rounder, with Martin emerging victorious by way of a close, but unanimous, decision.

The first round was competitive, Case (22-6) holding an edge thanks to a stiff jab that landed repeatedly in the opening five minutes. Martin (12-3) did get in his share of shots, though, and early in round two, the Minnesotan rattled Case with a right hand. Case shook off the effects of the blow and the two resumed throwing blows with fight-ending intentions. Martin’s shots eventually cut Case, but “Hollywood” remained in the pocket, much to the delight of his opponent, who made the most of any opportunity to begin jawing with the Iowan.

Keeping cool in the midst of the heated battle, Martin carried his momentum into the third round, delivering more hard punches before capping off his scoring run with a takedown in the closing seconds that secured the victory via three identical scores of 29-28.

Jeremy Kimball picked up his first UFC win in the light heavyweight opener, halting Josh Stansbury via strikes in the opening round.

Both fighters came out throwing hard, and it looked like the two were settling in for a back and forth battle until a Kimball right behind the ear froze Stansbury. Another right hand put the Ohio native on the canvas and a series of follow-up shots brought in referee Mario Yamasaki to stop the bout at the 1:21 mark.