‘THERE CAN ONLY BE ONE’

PRESS CONFERENCE WILL BE HELD ON SEPT. 27 IN MONTREAL - PUBLIC INVITED 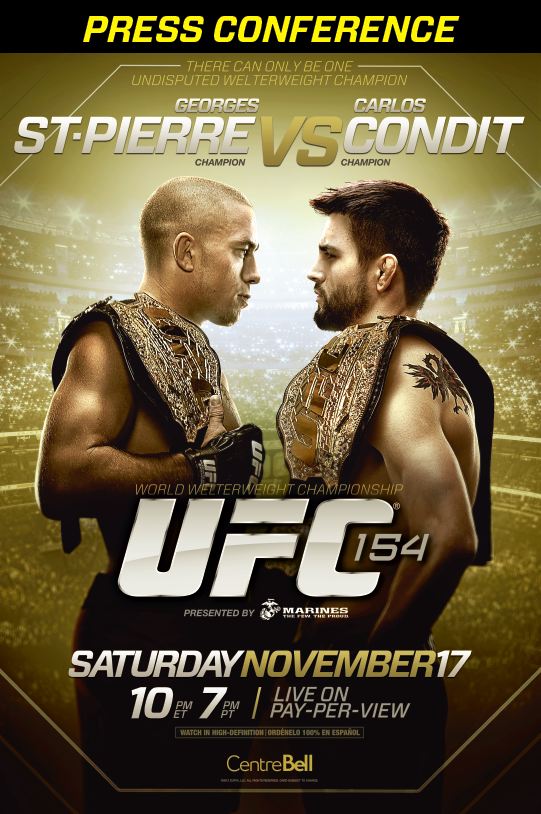 UFC® welterweight champion Georges St-Pierre has scored nine consecutive victories en route to a five-year dominant reign atop the 170-pound division. On Saturday, Nov. 17 at the Bell Centre in Montreal, the champion returns to his hometown after a 17-month absence due to injury looking to unify the welterweight title against dangerous striker Carlos Condit.

“One of the pound-for-pound best fighters in the world, Georges St-Pierre, is coming home to Montreal to defend not only his pound-for-pound standing, but his welterweight world title,” UFC® President Dana White said.

“St-Pierre has been off for over a year recovering from knee surgery and now has to face his toughest test in interim welterweight champion Carlos Condit, who won the interim championship by defeating Nick Diaz while GSP was injured. So on Nov. 17, in Montreal, Canada, it's champion vs. champion to see who will leave the undisputed UFC welterweight king!”

Boasting six defenses of his welterweight belt, the dynamic St-Pierre (22-2) has established a historic and unrivaled reign of the welterweight division. Now he faces his toughest threat to date in former WEC® and current UFC interim welterweight champion, Carlos Condit (28-5). Having routed his last five opponents on his road toward a shot against St-Pierre, the tactical Condit has shown he has the elusive footwork and pin point striking to silence the critics and dethrone the seemingly insurmountable St-Pierre.

“I'm excited to finally get back in the Octagon and reclaim my spot as the UFC welterweight champion,” St-Pierre said. “Carlos Condit is a very tough opponent. He has really good striking and very good submission skills. I respect him a lot and look forward to fighting him in front of my hometown fans in Montreal.”

An equally eager Condit said: “This is the fight the fans have been waiting so long to see. I still have not realized my goal of being the UFC welterweight champion, and to do that, I need to defeat Georges and unify the belt. I've worked my entire career for this fight, and I am excited it is finally happening.”

Also, Johny Hendricks (13-1, fighting out of Dallas, Texas) meets Denmark native Martin Kampmann (20-5, fighting out of Las Vegas, Nev.) in a compelling welterweight co-main event with title implications. As the only fighter to defeat interim champion Carlos Condit in the UFC, Kampmann feels a win over Hendricks will put him at the top of the 170-pound division.
Fresh off a pair of wins over former welterweight title challengers Jon Fitch and Josh Koscheck, the hard-hitting Hendricks is confident of his standing in the welterweight class and looks to add a fifth consecutive win to his impressive streak on Nov. 17.

UFC® Fight Club™ members will have the opportunity to purchase tickets to this event Thursday, Sept. 27 at 10 a.m. PT via the website www.ufcfightclub.com. A special Internet ticket pre-sale will be available to UFC® newsletter subscribers Friday, Sept. 28, starting at 10 a.m. PT. To access this presale, users must register for the UFC® newsletter through UFC.com.

UFC will hold a 12 p.m. press conference at the Montreal Science Centre for UFC® 154: ST-PIERRE vs. CONDIT on Sept. 27 with St-Pierre and Condit in attendance. The press conference is free and open to the public.