Georges St-Pierre walked the halls of T-Mobile Arena in Las Vegas, a city where he’s fought almost a dozen times, with wide eyes and a smile seemingly glued to his face.

The former welterweight king has done a hundred interviews, taken thousands of fight pictures, and he remembers all the familiar faces that were around when he walked away from the UFC three years ago.

But when GSP made the choice to step away from the sport he dominated for almost a decade, he wasn’t enjoying the fight game, its lifestyle or the experience.

“I was not really happy toward the end of my run. I felt like I fought because I had to, not because I wanted to,” St-Pierre told UFC.com in an exclusive interview. “I was forced, through the entourage and everybody that I carried with me – I felt like I had to do it. It did not make me happy.”

With the ink on his new UFC contract still drying, St-Pierre is in Las Vegas to take part in a historic press conference today with his announced opponent for a date yet to be announced in 2017: middleweight champion Michael Bisping. 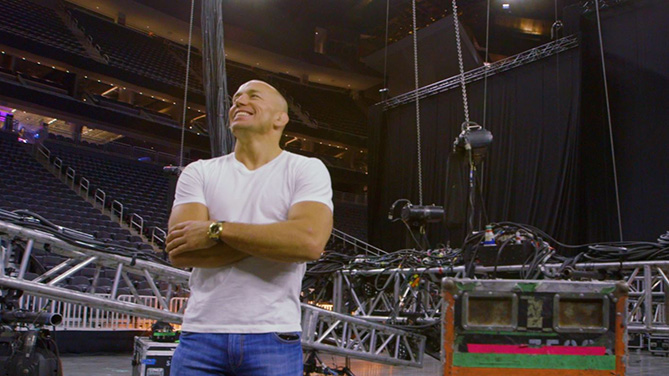 St-Pierre jumped the line for a shot at the 185-pound title, likely because of his impeccable resume. He’s currently riding a 12-fight win streak that includes nine title defenses of the welterweight title he held before he left.

Some fighters in the middleweight division, namely Yoel Romero and Jacare Souza, probably weren’t thrilled with the news that St-Pierre was taking the title shot they both believe they earned.

But GSP thinks they should have an open mind.

“Of course, Yoel Romero and Jacare would be pissed, but I believe they should think about it and be happy because of the name, the popularity, I used to have,” he said. “And if I have the same popularity as I used to have to this division, it’s going to elevate everybody.”

St-Pierre isn’t apologizing for getting an opportunity to become only the fourth fighter to win titles in multiple weight classes.

“The opportunity that someone has sometimes make other people angry, because we all want the same goal,” St-Pierre said. “I don’t have a lot of fight left so I want to take the fight against the best fighter.

“Now I’m in my prime. I know it, my trainers and training partners know it. So I want to fight the fight that the fans want to see. But also the fight that elevates me the most.”

Get your Georges St-Pierre Fight Kit and fan gear in preparation of his Octagon return against Michael Bisping for the middleweight title!

St-Pierre is determined to build on his already cemented legacy with the time he has left in the fight game. The final chapter begins with Bisping at some point in 2017 and GSP is enjoying the ride again.

“I’m going to have to come back with more creativity, better reaction, better tools than I used to have. I’m aware of that, and I’m going to come back and shock the world. That’s why I’m here.”