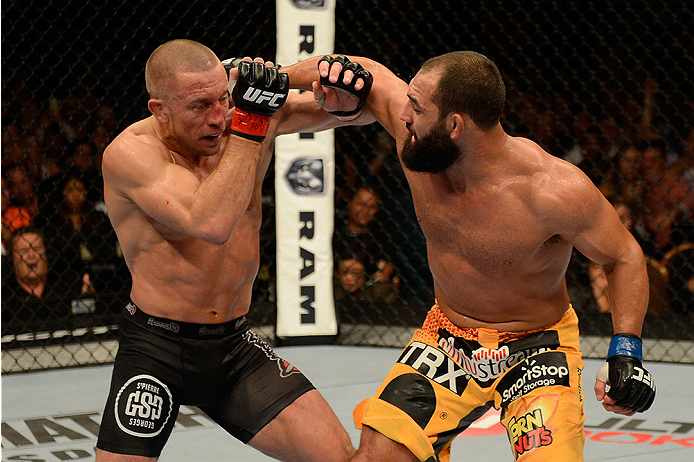 OH NO, ANOTHER CONTROVERSIAL DECISION
I hate to go along with the crowd, but in the case of Saturday’s UFC 167 main event between Georges St-Pierre and Johny Hendricks, I do have to agree that the challenger, Hendricks, should have gotten the nod by a score of 48-47.

The fight was a close and competitive one, and while I can’t see how any 3-2 fight – in either direction – can be a robbery, the right guy should get the win when all is said and done.

In practically all of the post-fight analysis, rounds two through five are pretty clear-cut, with GSP taking rounds three and five and Hendricks picking up two and four. The questionable round in a lot of eyes is the first. So do you give Hendricks the round for the more damaging close range strikes, that began marking the champion up early in the frame, or do you give it to St-Pierre for his early takedown and submission attempt? I gave it to Hendricks for the more effective and damaging strikes, and judge Glenn Trowbridge agreed. Judges Sal D’Amato and Tony Weeks gave the round to the champion, and that proved to be the deciding factor in the final verdict, as all three judges agreed on the rest of the four frames.

So now the debates begin – well, actually they already started. And while I won’t bore you with endless breakdowns of the fight, I will say that a lot of folks calling this the worst decision in the history of combat sports are way off base. Yes, I think Hendricks should have won, and when the right guy doesn’t get his hand raised, that’s an issue. But…a few people whose opinions I respect thought GSP deservedly got the win, and a lot more people are judging St-Pierre’s face and not the fight. At this point in his long and storied career, St-Pierre is seemingly bleeding and swelling up before Bruce Buffer’s introductions. He can take a helluva shot, but his face is not reacting well to them. So while GSP looked like he got hit by a baseball bat after the fight, Hendricks was unmarked, leading observers to say ‘well, look who won the fight.’ And while the rules of Japan’s PRIDE organization would have likely made Hendricks an easy winner, with the 10 point must system of the unified rules of MMA, the fights are scored by rounds, not cumulatively, and when it comes to rounds, this was a fight that likely came down to how you scored the first one.

THE YEAR THE CHALLENGERS TOOK OVER
Shakespeare said it best: “Uneasy lies the head that wears a crown.” That’s been the case in 2013 for champions in the UFC. Not all of them mind you, but it seems like those at the top have been threatened or defeated more often than in any year in recent memory. In 2013, there have been 16 UFC title fights thus far. In two of them (Weidman-Silva, Pettis-Henderson), the title has changed hands. In six more (Johnson-Dodson, Aldo-Edgar, Rousey-Carmouche, Henderson-Melendez, Jones-Gustafsson, St-Pierre-Hendricks), the champion has been seriously threatened by his or her challenger before emerging victorious. If you’re keeping score at home, that means that the only champions who started 2013 with the belt and will leave with it intact after emerging unscathed from title fights are heavyweight champ Cain Velasquez and interim bantamweight king Renan Barao. That means the other seven champs either lost the belt or got severely tested before the final bell, and what that says about the sport is that parity is most certainly present at the top of each division. That’s a good thing.

BIGG RIGG DELIVERS
I was not alone in believing that Johny Hendricks had the power, the wrestling, and the attitude to beat Georges St-Pierre on Saturday night. Was I ready to pull the trigger and declare that he would win the fight? No. I’ve been burned by GSP before, thinking that a challenger had the goods to upset the welterweight apple cart, only to get silenced again and again by the Canadian’s fight night brilliance.

But at UFC 167, Hendricks delivered on all that promise, proving that even if he didn’t get the crown placed upon his head in Las Vegas, he eventually will. My only issue with his performance is that he didn’t press the action more once he realized that he was hurting St-Pierre with his strikes and that the incoming fire he was on the receiving end of wasn’t doing any damage. Maybe he was concerned about going five rounds for the first time, but now that he’s done it and got that concern out of his mind, he will be even more dangerous in the future. And that’s scary.

THE FUTURE FOR GSP
Of course, if you weren’t talking about the controversial verdict in Saturday’s main event, you were likely discussing St-Pierre’s post-fight interview, in which he said he needed to take some time off to deal with personal issues. Being that those issues were not revealed to the media and that they are personal, I’ll leave that topic alone. But my question is, has GSP lost a step or his desire to fight, or both? He said all the right things leading up to the bout, as he always does, but after setting record after record and being the hunted (instead of the hunter) for all these years, what’s left for him to accomplish. He’s been the top welterweight in the world for years, he’s defeated all comers, but the way I saw it, the fire just wasn’t there on Saturday night. Of course, having Johny Hendricks dropping bombs on you can have something to do with that, but to me, the “old” GSP would have taken a few of those shots and then did whatever he needed to do to get the fight to the mat. Yes, Hendricks is a two-time NCAA wrestling champion, but St-Pierre is also considered to have the best MMA wrestling in the game. For the first time in a long time, St-Pierre looked one-dimensional Saturday night, unable to adjust to what was presented to him. Maybe time off will do him good, or perhaps the punishment he took at the hands of Hendricks will light that fire once again for a rematch. Whatever way this saga goes, the next few months should be quite interesting.

For musings on the rest of the UFC 167 card, check back to UFC.com on Tuesday morning.