It’s clear that things were getting heated at The Theater at Madison Square Garden on Thursday when Michael Bisping was forced to be the voice of reason. But that was the case when UFC 217 co-main eventers Cody Garbrandt and TJ Dillashaw began jawing with each other during the final press conference for Saturday’s bout at MSG.

“Relax, calm the #$%$ down,” said the UFC middleweight champion, who was in good spirits, taking jabs at everyone from Garbrandt and the media to welterweight contender Jorge Masvidal and the fans in attendance. As for his opponent, former welterweight champion Georges St-Pierre, Bisping even tried to get the press to ask the Canadian more questions.

“Any questions for Georges?” said Bisping. “He hasn't been here for four years.”

Through it all, GSP smiled, unbothered at this point by the barbs delivered by “The Count.”

“He's trying to play mind games and in every interview he's begging me not to wrestle him,” he said. “But I don't mind.”

It’s been a common theme throughout the lead-up to Saturday’s headliner, that St-Pierre will be looking for a takedown early and often once the Octagon door closes. 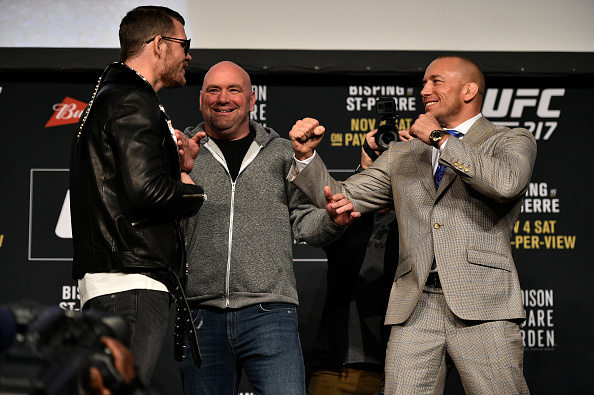 “Jab, jab, double leg all day,” said Bisping of the strategy he expects from the challenger. But the Brit also revealed his solution to such a game plan.

“Georges is a very good wrestler, but you know what the best takedown in the game is?” he asked. “A left hook. That's how I won this belt and that's how I'm gonna keep holding this belt.”

St-Pierre, 36, kept smiling, taking in the atmosphere before his first fight since 2013.

“I can't wait,” he said. “There is no other place and moment I would rather be in than right now.”

Bisping, 38, can’t wait either, as he expects that following up wins over Anderson Silva, Luke Rockhold and Dan Henderson with a victory over St-Pierre will solidify his legacy.

GSP didn’t blink, continuing to grin at his foe, who made sure he got the last jab in.

“You can do all the pushups, backflips and protein shakes you want,” Bisping said. “You will never beat me in a fight.”