GSP and The Fight He's Waited For

"He’s gonna make the best come out of me in this fight." - Georges St-Pierre 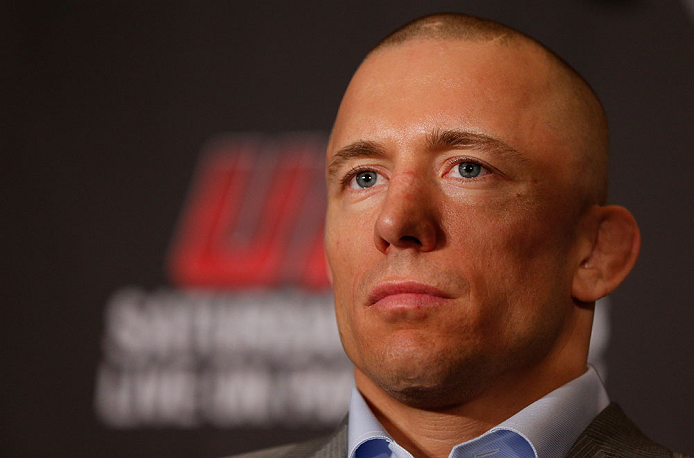 Face bloodied, head swollen, forced to go 25 hard minutes with a hungry fighter looking to take his title away from him. For a lesser athlete, it would be a stark reminder of why you play other sports, but don’t play fighting. For Georges St-Pierre though, the only thing he took away from his return to the Octagon last November against Carlos Condit after a serious knee injury kept him out of action for over 18 months was that he was still GSP.

“I knew during my training camp that I would go through the fight no problem,” said St-Pierre of his five round unanimous decision win, which also earned him Fight of the Night honors. “I was very confident and I felt very strong.”

It was almost the perfect fight for the 170-pound boss to come back with. It was a tough fight, one in which he got knocked down by a head kick in the third round, got battered and bruised, and left the Bell Centre that night with no doubt that he was the same fighter that had ruled the division since 2008. You don’t get that type of validation in a 30 second win, even if he may disagree.

So with the order of the welterweight universe back to normal, St-Pierre now prepares for a vastly different challenge in the form of longtime nemesis Nick Diaz. There has been no illusion of cordiality between the two before their UFC 154 meeting this Saturday, no idea that this is simply two sportsmen plying their trade for 25 minutes or less on fight night. St-Pierre, always the gentleman, has tried, but starting with an incendiary media teleconference last week and continuing with an equally heated press conference in Montreal on Thursday, it’s clear that these two won’t be breaking bread after the fight. But St-Pierre wasn’t shocked by Diaz’ outburst on the teleconference, where he talked of the champion being pampered, while GSP countered by calling the challenger an “uneducated fool.”

“No, I’m not surprised,” he said. “I was not expecting anything, but I don’t focus on this because I don’t control it.”

What he can control is how he reacts to the barbs from the Stockton, California contender, and while those around him say they’ve never seen “Rush” so angry, and there were hints of St-Pierre about to lose his cool during the two media outings with Diaz, he’s trying to keep things strictly business, at least when the bell rings.

Not surprisingly, the back and forth banter between the two welterweights has made the fight even bigger, with anticipation seemingly growing by the minute. This has baffled St-Pierre.

“If more people tune in because the fight gets more emotional, I think it’s kind of crazy,” he said. “It’s a good fight because Nick Diaz is a very good and skilled fighter. That’s why people should tune in, not because of emotion. If he likes me or not or if I like him or not, we’re still gonna hit as hard as we can on each other.”

So how does he keep the emotion out of a very emotional situation?

“It’s not the first time for me,” he said. “I’m experienced and it’s very easy for me to do that.”

At least he thinks so. Unlike two of his previous antagonists, Josh Koscheck and BJ Penn, the trash talk and angry stares ended once the bell rang. Then it was time to fight. With Diaz, nothing is resolved or squashed until the fight ends, and as Joe Riggs would attest, sometimes not even then. There will be taunting, there will be angry words, and there will be Diaz doing everything he can to goad St-Pierre into fighting his fight. Oddly enough, that may be the reason St-Pierre asked UFC president Dana White for Diaz.

“He’s gonna make the best come out of me in this fight,” said the champion. “It’s the fight that everybody wants, that the UFC wants, and also the fight that sells the most.”

It’s also the fight where Georges St-Pierre can silence any critics once and for all. Diaz is the cult hero, the man everyone said had the style to beat GSP, and the one who they believe can take the Canadian out of his comfort zone.

Saturday night, a lot of questions will be answered, but if past history is an indicator, Georges St-Pierre is likely to walk out of the Octagon knowing that he’s still GSP.