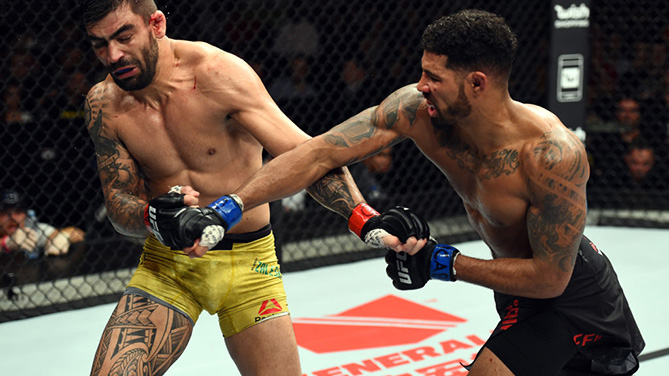 No one likes to lose in the fight game. Max Griffin may dislike it more than most. But when he looks back to his October defeat to Elizeu Zaleski dos Santos, he can be a little more philosophical about it, especially when he considers what that Fight of the Night meant to his career and his life.

“If I would have put him away when I dropped him, I wouldn’t have gotten Performance of the Night or the bonus,” he said, talking about the second-round knockdown he scored that followed a hellacious first round that had Griffin in trouble. “For me to get hurt like that and come back and be on Bambi legs and bust him up and make him start shooting on me if it wasn’t back and forth to get that bonus, we wouldn’t be talking about this right now.”

“This” is Griffin’s new career as a full-time fighter. From the time he put on the gloves professionally for the first time, the Sacramento product juggled life in the workforce with life in the fight business. It’s the tale of many up and comers, and one that can push someone’s resolve to the limit.

“I’ve been working since I was 15 years old, full-time,” he said. “So more than half my life I’ve been working. When I was 21, I started training. Train in the morning, go to work, train at night. That was my life.”

Add in a wife and son, and Mr. Griffin had precious little time to take the rest of the world in. But he was dedicated and determined to make it big in MMA, and after going 1-1 in his first two UFC fights, the third fight was the charm, with his bout against Zaleski dos Santos earning him the post-fight bonus that allowed him to quit his job as a Facilities Coordinator for Corporate Real Estate at Blue Shield of California.

“I’ve been working my whole life just to be able to fight full-time,” he said. “I had a hard road, so for me to get here and be able to do everything I need, now I get to put everything together instead of doing stuff once or twice a week. It’s incredible. I’m ready for the next level, and this fight’s gonna show it. I’m beyond excited.”

This weekend, Griffin not only gets his chance to show what full-time Max “Pain” can do in the Octagon, he gets to do it on the opening fight of this weekend’s FOX card in Orlando when he faces Mike Perry. It’s a clash of welterweight sluggers sure to produce fireworks, but Griffin insists that what we’ve seen thus far was just scratching the surface. So expect more.

“I got to this point part-time as far as I’m concerned,” he said. “It’s a testament to what I am gonna do and what I can do. I’m not even to my potential.”

A recent visit to the UFC Performance Institute had the coaches there raving about the 32-year-old. And if he has improved as much as he says he has since last October, he could be on his way to big things at 170 pounds, especially given that he’s proven to have the power and the heart to make some noise in one of the UFC’s toughest weight classes. He’s known that he’s had both for a long time, but it’s the heart that really makes him feel like he can take on the world.

“It’s good, it’s like a little security blanket,” Griffin said. “But I’ve known that from the start. Hey, I’m trying to win. (Laughs) I think a lot of these guys that get TKOed, they just give up. You go through something like that (getting rocked against Zaleski dos Santos) and you come out of that, it’s your choice. Unless you get knocked cold, then that’s different. But if you’re not knocked out, you can still fight. You have to pull it out of you.”

Griffin has proven that he’s got that extra something in his chest. Now it’s time for him to put everything else together and get the biggest win of his career this weekend. If he does that, is he ready for whatever comes next?

“I am,” he said. “I’ve been waiting for this my whole life. I know a lot of guys say that. I’m a humble guy, and I’m ready. I may not have been ready a long time ago in my younger days, but I am now. I was born to do this. I’ve been doing this since I was four years old. And I’m not just a fighter. I’ve got a brain, I’m charismatic, I’m marketable. I’m ready.”

As for Mike Perry…

“I don’t have to try and do anything special,” Griffin said. “I put all the work in, and I’m gonna put him away.”