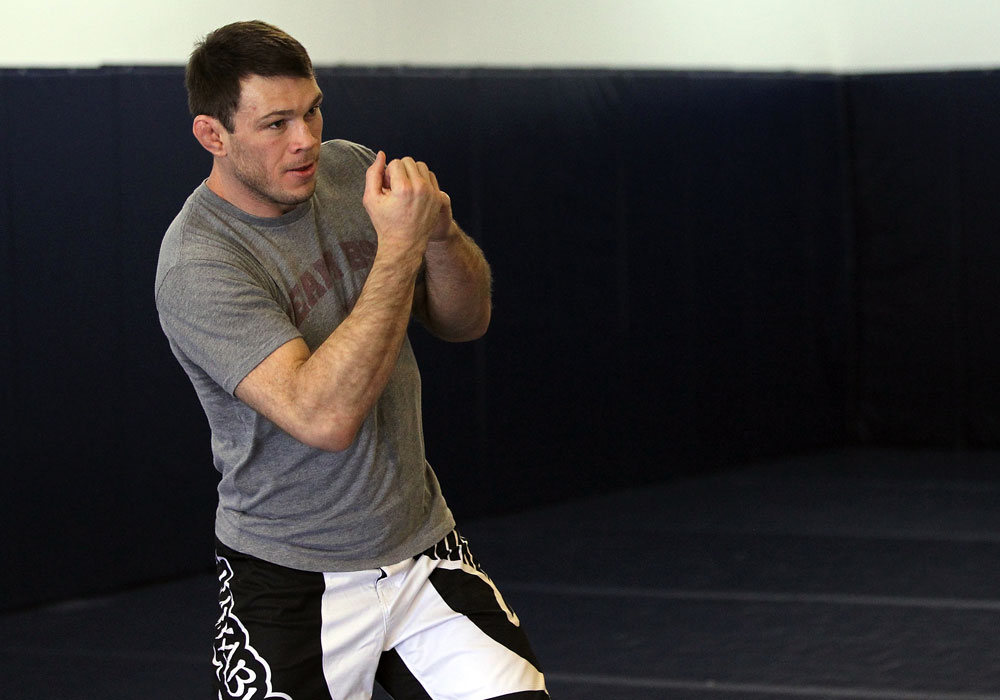 Never one to worry about what other people think of him, Forrest Griffin isn’t too bothered about the possibility that he could be seen by some fans as the bad guy or the man in the black hat should he hand Tito Ortiz a loss in the soon-to-be UFC Hall of Famer’s final fight this Saturday night in Las Vegas.

“Not at all,” he chuckles. “I hadn’t even thought about it until you brought it up. I see more Xs and Os, move right, not left, don’t stand up so high, etc.”

Speaking after an open media workout in his Vegas hometown last week, Griffin sounds more relaxed than usual before such an important fight. Maybe it’s his new status as a father that has calmed the former light heavyweight champion and Ultimate Fighter winner, but the way he sees it, at least now after all these years, all this stuff that surrounds the actual fight isn’t really all bad.

“It’s not that hard,” said Griffin. “I don’t work that much, I just have a weird job. It can be inconvenient, but I usually don’t work more than five hours a day, so it’s a pretty good job.”

That’s not the reaction you would have expected after his last bout in August of 2011, a disappointing first round knockout loss to a man he had beaten four years earlier, Mauricio “Shogun” Rua. Following the bout, Griffin immediately got on a private plane with UFC president Dana White and went to the hospital to watch his wife give birth to their daughter. It was a crazy 24 hours to say the least, and just the kind of situation that can put things in perspective in a hurry. So when you ask him about the Rua rematch and whether his mind was wandering before and during the fight, he immediately dismisses that notion.

“It really didn’t matter,” he said. “I was actually in pretty good shape for that fight and I felt pretty good. I was having little stomach issues the day of the fight, but I felt good. He just got me with a great hammerfist right across the side of the jaw and that was all it took.”

The loss was Griffin’s first since his 2009 defeat to Anderson Silva, and though it snapped a two fight winning streak, it did capture what makes the sport what it has always been for him – an escape of sorts.

“That’s something I’ve always loved about the immediacy of fighting,” he said. “Anything else that can be going on in your life becomes secondary. It gets muffled out by the fact that there’s a large man trying to hit you.”

The next large man trying to leave an imprint of his fist on Griffin’s head will be Ortiz, an old nemesis who the Georgia native has split two fights with. Both bouts were split decision nail biters, and as the trilogy prepares to go down in the UFC history books, it’s also one that Griffin will put a mark next to as something special in his own career.

“The first fight was a coming of age for me,” he said. “The second fight was a good rebound fight after a tough loss. I took it on short notice and it worked out well for me. It’s been a big part of my career. He had the series with Chuck (Liddell), but I think as far as three fight rivalries, me and him have got a pretty good one going.”

But is Ortiz the same fighter he was even three years ago in their rematch? Griffin’s not sure, but he is expecting a fight on Saturday.

“I don’t know as far as his health,” he said. “He can only be so healthy at 37 when you’ve been fighting people for 15 years. But I’m sure he’ll be in shape. He’s been breathing the rare air, he comes out hard, and I expect a motivated, in shape Tito.”

That fighter will be one who’s not only looking to put a stamp on the Griffin trilogy with a win, but to leave the Octagon for the last time with his hand raised. That’s a lot of emotion there and a lot of pressure. That could overwhelm some fighters, but for guys like Ortiz, it’s the only way they know how to operate. So Griffin knows there will be some storms to weather early on.

“He (Ortiz) is gonna come out on fire, he’s gonna come out to handle business, and one of the things I’ve got to make sure I don’t let happen is to get taken down while he’s fresh, to get taken down without hitting him or wearing him out a little bit,” he said. “He’s gonna go for the kill off the jump and I think with everything going on, he’s going to be hell for the first half of the first round.”

After that, many fans and pundits expect the fight to favor Griffin, who, at 33, may have a lot more left in the tank. But does he still have the fire for this, the desire to put his body on the line in training and the Octagon? When you ask him where he’s at though, he says that he’s content to take the route former opponent Rich Franklin took after losing his middleweight title – one where he’s not necessarily on a contender’s road, but instead fighting big fights against big names.

“That’s exactly where I’m at,” he said. “I want to fight big fights, co-main event stuff. You’ve got your main event guys, and I want to be like the co-main event guy. When you set your sights a little lower, you don’t always miss.”

He has won two of his last three though, and a victory against Ortiz will be three out of four. A couple more wins after that, and hey, he could be in the title picture again, right?

“No,” Griffin responds. “I’m far afield from that right now. Things happen, but at one time I put this cart in front of a horse and it didn’t work out too well. The horse just left. And there I was, pushing that #$%$# cart.”

Well, if there’s anyone the fans love seeing push that cart, it’s Forrest Griffin. And though he doesn’t romanticize anything in his career, especially not the ending of his trilogy with Ortiz, this weekend he will do what he always does – he’s going to show up and fight.

“I’ve been pleased personally with the first two fights, and I hope for a good fight in this one. I hope to win first, and then second for it to be a good fight.”