Griffin after Signature Dish at Featherweight

“I’m after a dominating win over him (Bart Palaszewski) and hoping to make a case for fighting for the title.” - Tyson Griffin 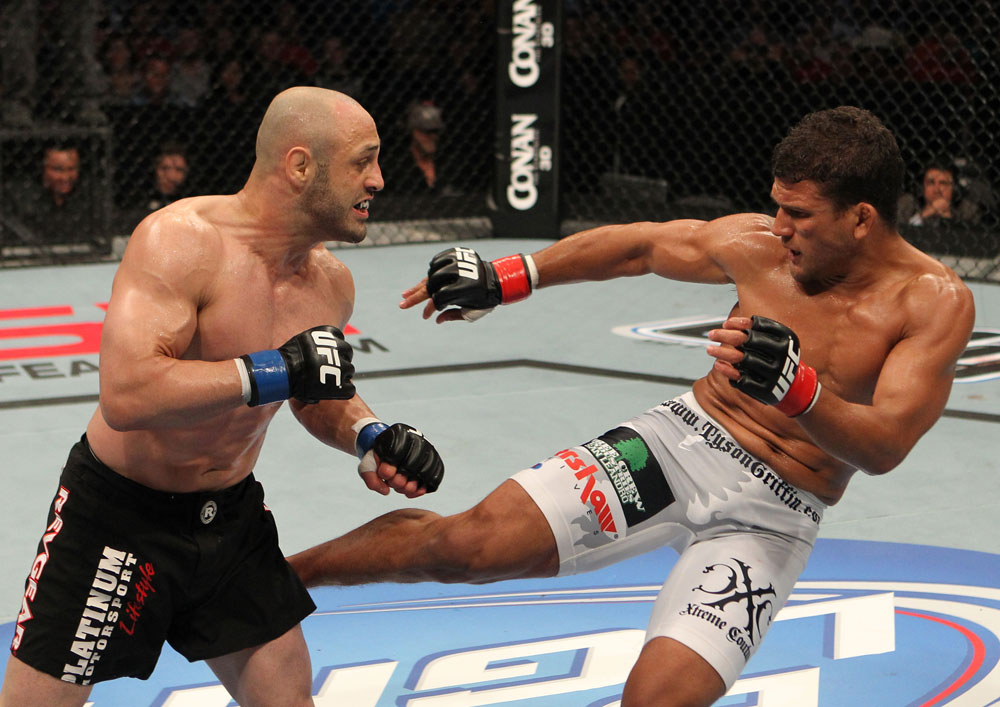 Tyson Griffin isn’t a fully-trained chef, but judging by his culinary portfolio, do not be surprised if one day he’s the first active fighter to compete on MasterChef. Griffin takes to Twitter to present his delicacies. Two weeks before his showdown with Bart Palaszewski at UFC 137 he picked up a steak at Whole Foods. “I earned it tonight,” he wrote. “The question is, how do I cook it and what should the sides be?”

Griffin’s post-MMA goal is to become a restaurateur. He’s been cooking for some time and among his other delights are tomato and basil soup with fried eggs, and a fruit and oat shake.

“Food is definitely one of the bigger passions in my life,” Griffin said. “I’ve been trying to create healthy stuff that tastes good in camp and keeping the good, fattening stuff out of camp.”

Griffin has literally trimmed fat, hoping to take what’s been the elusive next step in his MMA career. His recent run at lightweight was rougher than an amateur chef’s dinner service supervised by Gordon Ramsay. Three consecutive losses to Evan Dunham, Takanori Gomi and Nik Lentz left his UFC status on the brink before Dana White blasted the judges of the Lentz fight and handed Griffin a mulligan.

In just his third MMA fight, Griffin debuted as a featherweight for Gladiator Challenge in 2004 and earned a TKO victory over an upstart named Urijah Faber. Two fights into his second UFC featherweight run the stakes are much higher. It’s Griffin (15-5, 8-5 UFC) against Palaszewski (34-14, UFC debut), a 28-year old Polish competitor off a successful WEC stint at lightweight who recently had a four-fight winning streak snapped by a split-decision loss to Kamal Shalorus at WEC 53, on the Spike-televised portion of UFC 137.

Griffin’s recipe is straightforward: Be aggressive and push the pace. The prize is a significant bump up the ladder at the Grade-A prime age of 27.

“I’m after a dominating win over him and hoping to make a case for fighting for the title,” Griffin said.

Not surprisingly, Palaszewski has gone on record predicting a knockout if Griffin dares to live up to his billing as one of the lighter weights’ more exciting fighters. It’s a reputation that took a hit during his return bout at 145 against Manny Gamburyan at UFC on Versus 4. Going in, Griffin owed to himself, his fans and the UFC to push the pace. His previous contest was a controversial split decision loss to Lentz on the untelevised preliminary card of UFC 123 that extended his losing streak to three. A trio of defeats in the nefariously stacked 155-pound weight class normally translates into walking papers. White, however, announced that Griffin wouldn’t be cut and was a victim of yet another raw deal from the ringside decision makers.

Handed a reprieve, Griffin made a lifestyle change and tried his luck at 145. His first test was Gamburyan, a former No. 1 contender eventually smashed by champion Jose Aldo. In the third round, Griffin avoided Gamburyan’s advances, answering with counter punches and takedowns to sneak away with a majority decision victory.

The fight was a polar opposite to Griffin’s breathtaking pace. To earn brownie points with the UFC championship committee is to not only win, but to do it with a little sizzle. A win over Palaszewski won’t assure Griffin a shot at Aldo, but it will represent a second coming.

“Beating Manny I thought I acquitted myself pretty well,” Griffin said. “I guess it didn’t turn out that way because it wasn’t a very exciting fight, but Manny fought for the title and he was world-ranked. I feel like I’ve already beaten one of the top guys and I have to keep winning to keep myself out there.”

As a lightweight, Griffin was on the fast track, posting a 7-2 record in his first nine UFC fights while earning five “Fight of the Night” bonuses and a “Submission of the Night” award. A dynamic second round knockout of Hermes Franca at UFC 103 had Griffin in position to make his move. Then came a split decision loss to Dunham followed by a stunning first round knockout loss to Gomi. On the surface, the Gomi pasting at 1:04 of the first round was rock bottom, the ultimate scenario where a fighter’s mind, heart and desire are put to the greatest of tests. Film is reviewed and the healing process towards becoming a better fighter begins.

Not for Griffin, who dismissed it faster than a fed-up Chef Ramsay tosses a poor soul out of his kitchen.

“I just got caught with a punch and the fight got stopped quickly,” Griffin said. “I don’t think there was anything to learn from that, to be honest. I just got caught. I’ve had other losses I could learn from; Nik Lentz is a loss I can learn from. Even though I won, I thought it could be a little more convincing. I was getting my game plan going against Gomi. He’s a dangerous striker on the feet and I just ended up getting caught.”

The bounce-back win over Gamburyan wasn’t Griffin’s signature recipe, but it was a first step up a new mountain. Aldo has been tested in his last two title defenses, the second against Kenny Florian, who was competing in only his second fight as a featherweight. While the Brazilian Cobra remains indomitable at 145, there have been signs of fissures during a time when Griffin, George Roop and Hatsu Hioki are determined to add more depth to the division and delay any ideas of an Aldo-Frankie Edgar showdown.

Roop and Hioki will compete on the main card of UFC 137. The winner could conceivably be matched against the victor from Griffin- Palaszewski. It’s wholly appropriate that Griffin’s road to redemption is ongoing. Growing up with both his parents incarcerated, Griffin went through foster care before living with his grandmother. The ordeal is the impetus behind a charity raffle Griffin is promoting for Boys Town Nevada, a foundation that reaches out to families in need physically, spiritually and emotionally. The goal is to encourage better and closer families working together to put them on the path to brighter futures.

“I can imagine how tough it can be for someone that’s, I guess, not as mentally strong in those areas,” said Griffin, who, unlike many kids, used sports as an outlet growing up. “I like these kids and want to do a little more to explain the situation I’ve been blessed to be in. I want to help give back.”

Also blessed with a rare second chance, Griffin is determined to cook a masterpiece at UFC 137 and earn himself a thick steak, along with a thicker cut of the featherweight pie.