If not for the scar on his head, Matt Grice looks like any other member of the Oklahoma City Police Department. And if you didn’t know the story of that scar, of how being rear-ended at a red light by a distracted driver going 65 miles per hour at impact nearly killed him, you might just assume he got that scar during his time as a professional mixed martial artist. 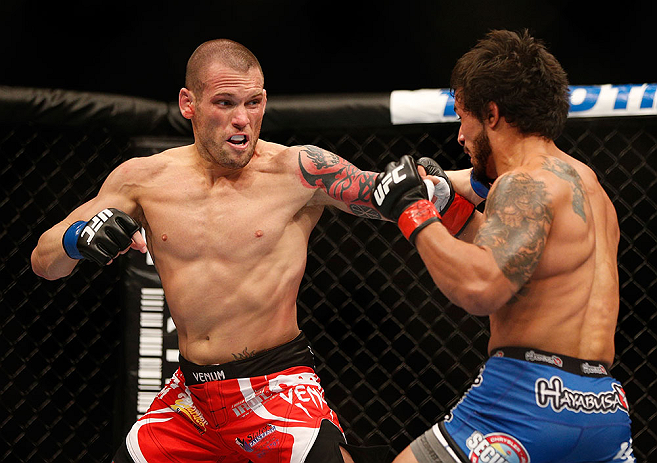 That’s the best compliment you can pay Grice, because it reminds him that life is as close to normal as it can be, something he and his family never would have expected after that accident in September 2013.

That day, Grice was on his way home to his wife Caroline and daughters Harper and Finley. He was a little over six months removed from one of his best performances in the Octagon, a Fight of the Night-winning effort against Dennis Bermudez in which he lost a razor-thin split decision, and he was scheduled for an October 2013 return against Jeremy Larsen at UFC 166.

Then, in a split second, everything changed.

“It seems like it’s a whole other life that all that happened in,” Grice said.

Today, Grice, 34, is getting his feet wet in his new position within the Oklahoma City PD, working with the department’s Police Athletic League. He also hits his R1-MMA Training Center regularly, coaching a new generation of mixed martial arts hopefuls. Life is good. Different, but good.

"I didn’t get to retire on my terms when I was ready. It was taken from me, but I look at it as God has a plan for everything, and if I can inspire some of the other guys and other people in this world to keep fighting and keep trying, that’s what I’m here for." -- Matt Grice

“Every once in a while I look back at all the stuff that I’ve been through and done, and try to make the best of the situation,” he said. “I didn’t get to retire on my terms when I was ready. It was taken from me, but I look at it as God has a plan for everything, and if I can inspire some of the other guys and other people in this world to keep fighting and keep trying, that’s what I’m here for.”

He wasn’t supposed to be here. Not this way. Rushed to the hospital from the scene of the accident, Grice had a traumatic brain injury, and after emergency surgery, he was in a coma for a month. Doctors said that if he managed to live, his quality of life would be severely compromised. When he woke, he didn’t even recognize his wife and daughters.

“When I first got to come home, I was just different,” Grice said of those early days of recovery. “I still wasn’t all there. (Caroline) and my kids saw me every day and they could notice the difference in my personality. And it really affected my confidence, so the way I acted was just different. But now, I feel like I’m back to normal. Even my speech has gotten better. For a while when I was talking, I talked really slow and I had to think about everything that I said. It was like I was re-learning to talk and everything. It was really weird. It’s hard to explain.”

Grice doesn’t need to explain. Talking to him says all you need to know. He’s still Matt Grice, the fighter who put together a 15-5 pro record from 2005 to 2013. Seven of those bouts took place in the UFC, and when the topic of fighting comes up, that’s when you truly realize that really nothing has changed with “The Real One.”

“If they released me tomorrow, I would fight tomorrow,” he said. “There’s no doubt about it, I’d be in there.”

He means it too. And while that can’t happen, it’s about the only thing he can’t do these days. In October of 2014, he returned to the police department, and not to a desk job.

“After the accident, I came back to work and I was working on patrol,” he said. “The doctors were saying I would never do that again, but I proved them wrong, the way I did a lot of things, and I went back to the streets and was on patrol for a little over a year. And then I put in for a new position with the Police Athletic League, and I got that. So for the last couple months, I’ve been starting that new journey. I’m proud to be a part of it, trying to help these young kids.”

“She’s happy,” he said. “I still work a lot of overtime, so I still patrol when I do my overtime. But her and the kids are glad that I’m not on the streets every day anymore.”

Caroline Grice did marry a fighter. And a police officer. And someone who has cheated death before.

I remind Matt of our first interview in 2007, just before his UFC debut against Terry Etim. We talked of the car accident that he suffered the summer before his freshman year at the University of Oklahoma, one that threw him through the windshield of his vehicle and kicked off a series of injuries that led to eight surgeries during his college years. 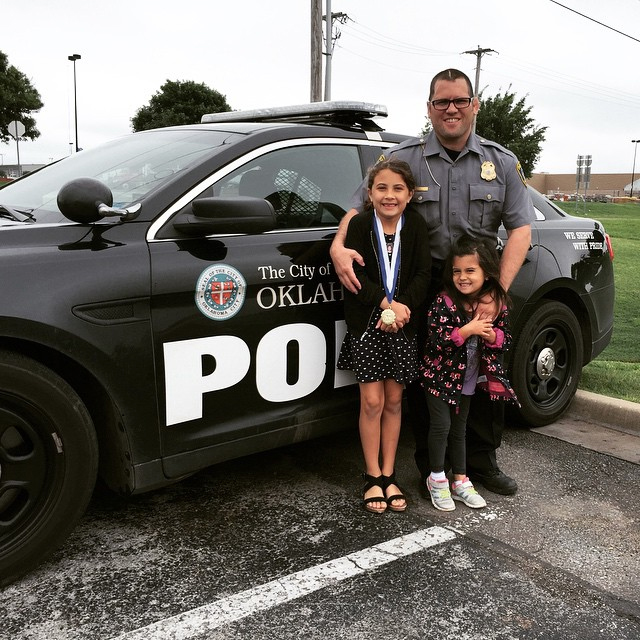 “It definitely made me realize that life’s short and that anything can happen at any given time,” he said at the time. “Everything can be taken away from you in a heartbeat.”

He knows that more than ever these days. So does Caroline.

“My wife tells me I’m like a cat,” he laughs. “They’ve got nine lives and all mine are used up.”

But what a good one he’s living now. Grice speaks with pride of the fighters in his R1-MMA gym, and UFC fans will likely see him Octagonside when he corners one of them, bantamweight Jerrod Sanders. But most importantly, he’s still Matt Grice.

“My recovery isn’t the norm,” he admits. “I thank God every day that I recovered as much as I did so I can be here with my wife and kids and help support them still because most people in this case don’t recover like this.”

More from 'After the Octagon' Series: