Greg Hardy: There's Nothing But Domination To Come

After getting a couple a wins in the UFC, Greg Hardy feels that it's the perfect time to start making moves up the heavyweight ladder.
By E. Spencer Kyte, on Twitter @SpencerKyte • Oct. 15, 2019

This Friday in Boston, Greg Hardy looks to put the finishing touches on his first year on the UFC roster when he steps into the cage against Australian Ben Sosoli.

The former NFL star has garnered more attention, more criticism and greater opportunities than most rookies are afforded and, thus far, the 31-year-old has acquitted himself well, despite the increased scrutiny and elevated expectations.

“I think a lot of people do lose sight of the fact that I’m still a baby in this sport,” said Hardy, who made his professional debut with a 57-second knockout win over fellow former NFL defensive end Austen Lane on the first episode of Season 2 of Dana White’s Contender Series after registering three wins in as many months as an amateur. “Four fights ago, I was still learning the rules.

“I don’t think it affects me, but it does shape the perception of me right now,” he added. “That said, I think we’re going to remedy that coming into 2020.” 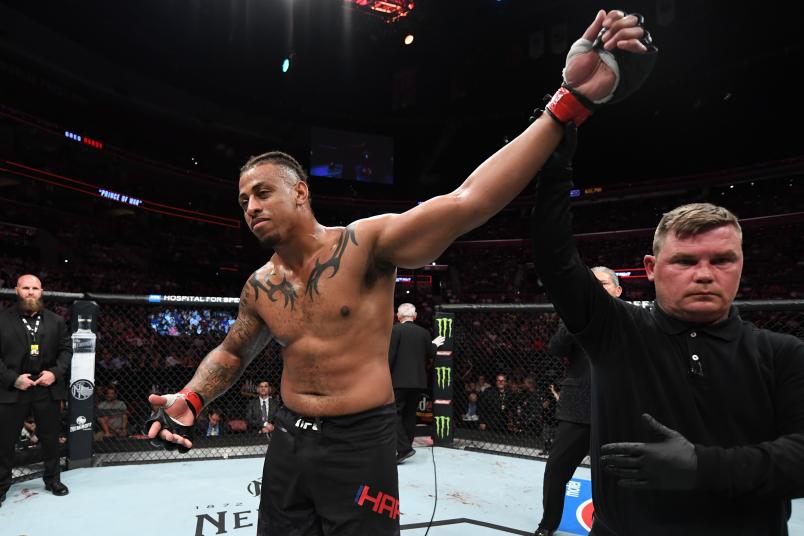 Looking at his transition to mixed martial arts, Hardy sees a correlation to his time on the gridiron.

Drafted in the sixth round in 2010, the Ole Miss product didn’t start a single game in his rookie campaign, while registering three sacks in 15 games. During his sophomore season with the Carolina Panthers, Hardy moved into a starting role, but still was a relatively unheralded member of the defensive line, posting 50 combined tackles and four sacks.

It wasn’t until Year 3 when his performance on the field went to the next level, as Hardy registered 11 sacks in 15 games, including 10 starts. A year later, he earned his first Pro Bowl invitation and All-Pro designation, collecting 15 sacks as part of an ultra-aggressive and extremely stingy Panthers defense.

As a late-round draft pick, the progression went from making the team and finding a role to starting to contribute and ultimately becoming a key piece in a quality unit, and it took 64 games over four years for Hardy to reach those heights. 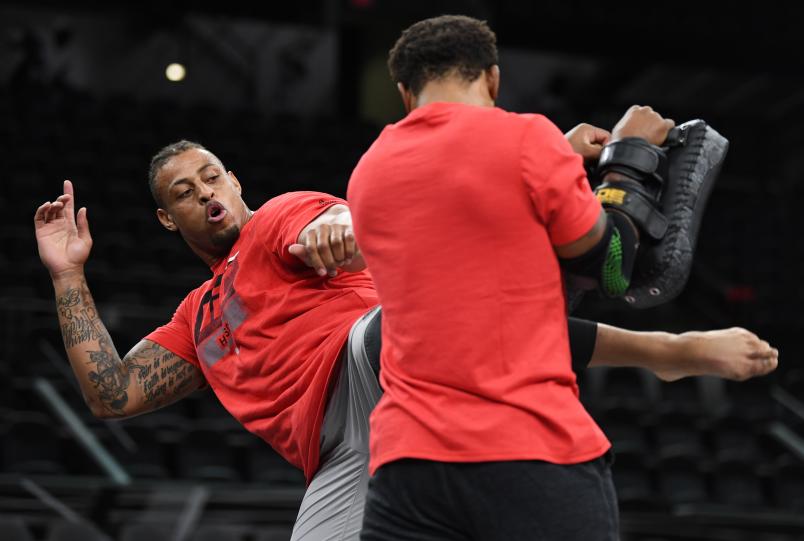 “I’m not even going to give it years because it could only be months,” he said, forecasting how long a similar climb could take as a mixed martial artist. “The difference between this and football is that you only go to camp in football for two months out of the year. In MMA, I’m in camp nine or ten months out of the year. I’m durable, I’m training, I’m learning and it’s only going to translate faster and faster and faster going forward.

“We’ve been through that first part where ‘he’s figured it out — he’s made the team and he’s happy to be here’ and now it’s time to go to that second phase,” Hardy added. “Now it’s time to prove that I deserve to stay here. Phase Two is about making sure that everyone understands that I deserve to stay here and there is nothing but domination to come.”

Hardy’s last fight should have been the one that made it abundantly clear that he’s here to stay and a considerable prospect in the heavyweight division, as he stopped fellow Contender Series alum Juan Adams in just 45 seconds back in July.

Ahead of the contest, Adams was positioned as both a legitimate prospect and the first opponent capable of truly pushing Hardy. The outspoken, once-beaten upstart was ticketed as the man to vanquish the former professional football player, but once Hardy swiftly disposed of Adams, the defeated fighter’s skills, abilities and standing within the division underwent a series of social media revisions. 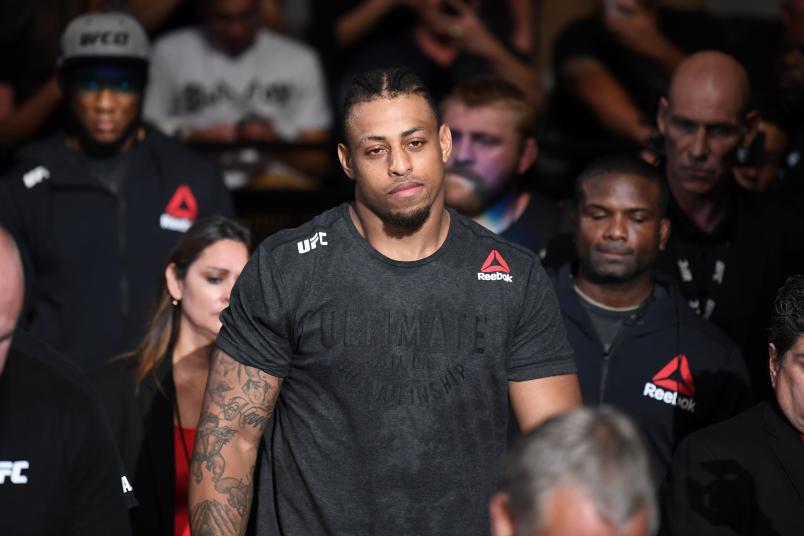 “I don’t think it gets me down so much as it hypes me up, because there is more to come,” Hardy said regarding the way his efforts are diminished, his upside is downplayed and the fighters he beats are immediately recast as “cans” in the aftermath of their encounters. “It’s going to be funny when I’m in the cage with a ranked guy and he becomes a can because I destroyed him in 45 seconds.”

But while many can’t wait for the day Hardy takes a major step forward and finds himself in the cage with a tenured veteran, the first-year fighter is content gaining experience and slowly working his way up the competitive ladder like most other UFC prospects.

“(Some people) are excited about getting me up there, seeing what I can do,” began Hardy, who carries a 5-1 record into his showdown with Sosoli on Friday evening. “But for me, it’s not a fame-seeking situation; it’s more the glory, the beauty in the sport, so me taking on these guys is an honor. It’s confidence building for me, but it’s also the fact that I get to go in there and test my mettle against another human being and build that comfort in the cage.

“You’ve got to know your limitations and you’ve got to be humble, because that’s the only real way to advance,” Hardy continued. “There are so many monsters out here that are getting better, faster every day and changing the game like (middleweight champion Israel) Adesanya, so you’ve got to just stay humble and improve.”

That has been Hardy’s mindset from the outset and the fact that he’s aligned himself with the elite crew at American Top Team from the jump shows the heavyweight prospect is committed to learning, improving and putting in the work necessary to earn greater opportunities. 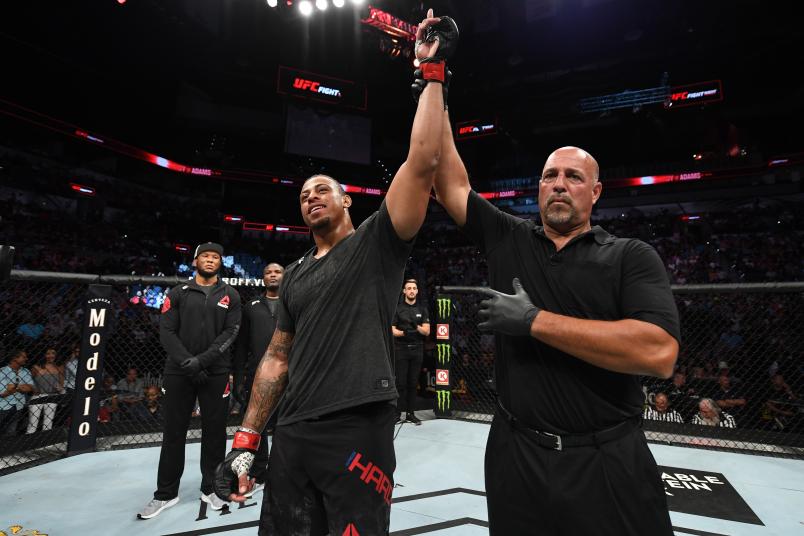 That said, there is no denying that Hardy is a different caliber of athlete than many who make the transition to mixed martial arts and that makes it impossible to forecast where his ceiling as a fighter rests at the moment.

While Hardy has already logged more than the “six months of sprawl training” many on Twitter often joke that elite athletes in other sports would need in order to become a force in the UFC heavyweight division, a future where he blossoms into a bona fide contender and potential title threat is not out of the question.

Though some people would like to see Hardy thrown in against the best the division has to offer in hopes of seeing him beaten, the emerging rookie knows patience is the key to reaching his full potential.

“Everybody I fight right now is going to be a can after I knock them out, but to rush would be immature; it would be childish,” said Hardy. “To have your sights on Daniel Cormier and Stipe Miocic and these guys, you need patience, and I think people are misunderstanding my quotes or whatever I’m saying about having these guys in my sights. 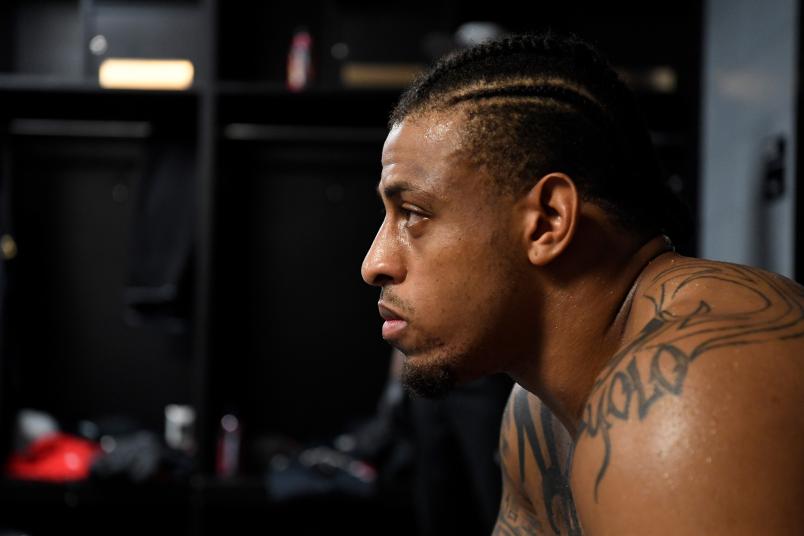 “It’s all respect. I’m taking measures. I’m scouting. I’m building skills and that’s where I want to remain. I think I’m in the perfect pocket right now and when it comes time, we’re just going to destroy the whole field.”

For now, his focus is on tackling another first on Friday, putting the finishing touches on Phase One and getting back into the gym to prepare for his sophomore campaign.

“It’s my first southpaw, so that’s a challenge for me and another part of finishing up Phase One and moving into Phase Two,” Hardy said of the 29-year-old Ultimate Fighter and Contender Series alum, who carries a 7-2 record with one No Contest into their main card pairing in Boston. “I’ve done my homework and I think it’s going to be a good fight.

“He has so much power,” he added. “Even in his losses, he’s shown that he’s a monster. It’s one of those fights that are super-exciting, so there is no prediction — it’s going to be a war and it’s exactly what I wanted.”