If you look at Greg Hardy’s UFC run as if he were a collegiate athlete, then the heavyweight would be kicking off his senior season when he steps into the Octagon against Serghei Spivac in the opening bout of this weekend’s UFC 272 pay-per-view main card.

“I would say that senior year is going to look crazy; the culmination of everything,” an excited Hardy said Wednesday afternoon, just a few days out from making his 2022 debut. “It’s definitely going to be a big, big move from the rookie Greg Hardy to the experienced UFC veteran.” 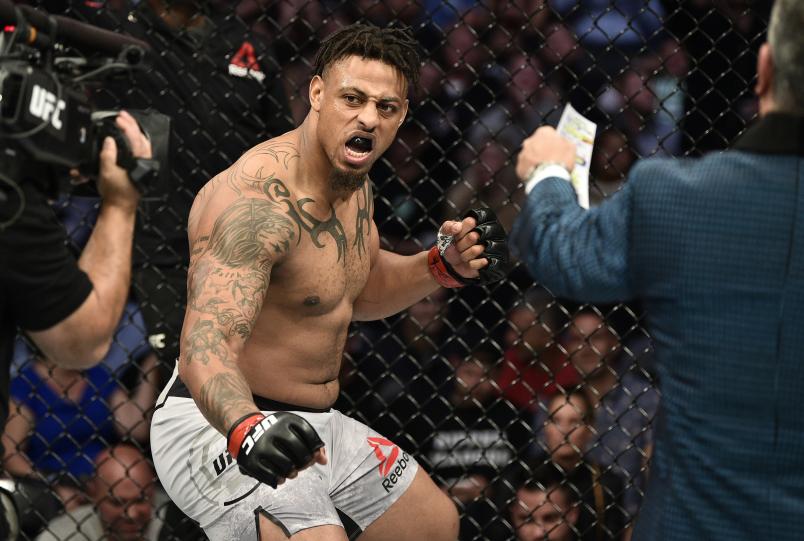 His first three years in the Octagon have been a series of peaks and valleys; the kinds of ups and downs that most neophytes would experience if thrust onto the biggest stage in the sport with only a couple years of training and three-ultra quick knockout wins under their belt before crossing over into the UFC cage for the first time.

In his freshman season, Hardy competed five times, culminating with a short-notice matchup with divisional stalwart Alexander Volkov in Moscow. While he lost the fight, Hardy held his own, going the distance with the significantly more experienced Russian veteran in a bout that forced people to recognize the former NFL defensive lineman could be someone that develops into a factor in the big boy division.

His sophomore campaign began with a pair of victories — a decision win over Yorgan De Castro in May and a second-round stoppage win over Maurice Greene on Halloween — before Hardy made a quick turnaround and took a step up in competition to face Marcin Tybura on the final fight card of 2020.

MORE UFC 272 : Masvidal Is Determined To Wreck Covington | Fight By Fight Preview | Fighters On The Rise | How To Watch UFC 272

After landing on the wrong end of a stoppage result against the Polish veteran, the 33-year-old former sixth-round pick made just one appearance in his “junior year” on the UFC roster.

Paired off with Tai Tuivasa at UFC 264, the duo got into the MMA equivalent of a duel, but instead of counting off 10 paces and then reaching for their pistols, Hardy and Tuivasa walked straight at each other, each man throwing heavy shots, and each man landing. 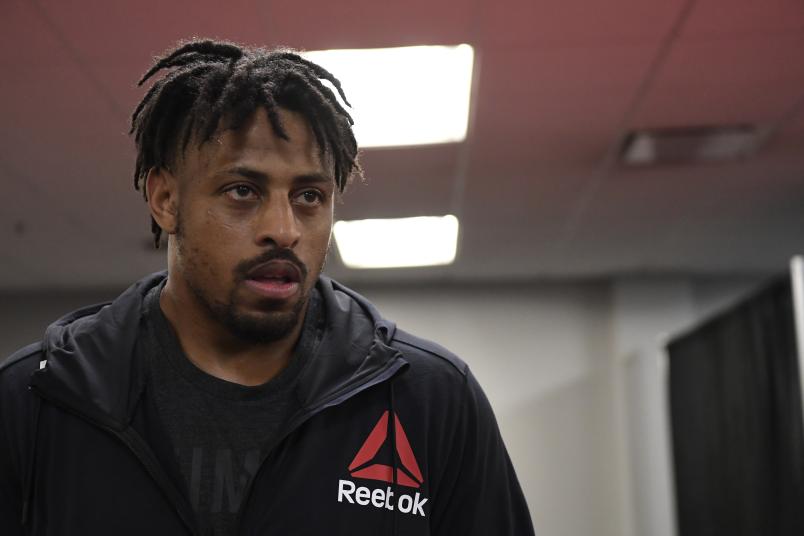 Tuivasa landed the cleaner blow, and Hardy was dealt a second consecutive loss.

“It’s been a hell of a career, man,” Hardy said, reflecting on his journey thus far. “Three years in, going hard. We’ve won a lot of fights and I’m happy that I put myself in a lot of good situations. I broke a record that first year — five fights in one year; the most active heavyweight — and came out of that year swinging and going hard.

“I took on COVID and then came to these grimy, rough opponents. I knocked out the first one, Maurice Greene, and then walked into Tybura and Tuivasa, and just kept learning. I would give myself a solid B+.”

Whether you agree or not with how he grades his efforts thus far, it’s not like Volkov, Tybura, and Tuivasa are out here getting turned aside by a whole bunch of fighters. The trio are a combined 6-3 since their individual wins over Hardy, with Volkov losing to Curtis Blaydes and Ciryl Gane, and Tybura losing to Volkov, while Tuivasa has added stoppage wins over Augusto Sakai and Derrick Lewis to move into the Top 5 in the heavyweight ranks.

“Matt Serra said it best — ‘A lot of people look too much into stuff,’” said Hardy regarding the way folks pick and choose what they focus on when looking at his recent outings. “What I’ve seen is me developing.

Officially, he stuffed three of four takedowns, but the one Tybura completed in the second round proved to be his undoing.

“I did an incredible job in the Tuivasa fight,” he continued. “I came out, stayed calm. It was a short fight, but I was doing the right things, I was on the right track — I didn’t look nervous, didn’t feel nervous. I was blocking punches, countering back, and then I rocked him, but then I made a mistake, so it’s just singling out those little mistakes.”

If you go back and watch the fight — which only lasted 67 seconds — nothing Hardy said is incorrect.

He welcomed Tuivasa to the center of the Octagon and stood toe-to-toe with the heavy hitter from Western Sydney, eating a collection of leg kicks right out of the chute before connecting with a solid right hand.  After Tuivasa landed an overhand right, Hardy pressed forward and connected with a right of his own that made “Bam Bam” lose his footing momentarily.

Sensing he had the Australian hurt, Hardy charged forward looking to follow up, but Tuivasa stepped out to his right, connecting with a glancing right hand with a thunderous right behind it that put Hardy on the canvas.

But folks only remember and only talk about the outcome, not the progress Hardy has clearly demonstrated.

“That’s okay. That’s part of the beast,” said Hardy. “I want to be respected based on my output and how I treat other people, and I want to give others the same courtesy. People are going to talk how they want to talk, and they have every right. It’s my job to go show them something different. 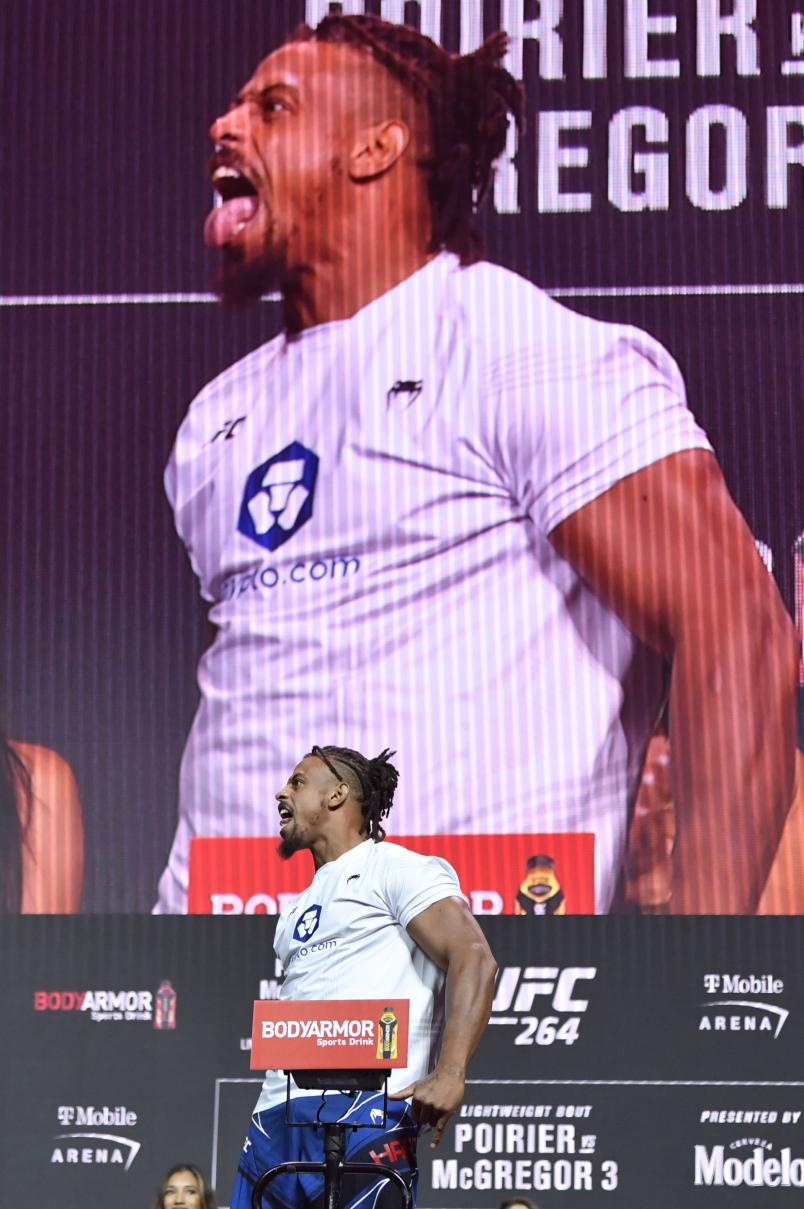 Greg Hardy poses on the scale during the UFC 264 ceremonial weigh-in at T-Mobile Arena on July 09, 2021 in Las Vegas, Nevada. (Photo by Jeff Bottari/Zuffa LLC)

“I love it though. I’ll meet the challenge head-on.”

This weekend, the challenge he’s facing is Spivac, a 27-year-old from Moldova who has gone 4-3 in his first seven appearances inside the Octagon.

After dropping two of his first three fights in the UFC, the six-foot-three “Polar Bear” rattled off three straight victories, including a decision win over veteran Alexei Oleinik last summer, before crossing paths with surging British contender Tom Aspinall in the fall.

“I just have to be aware that he’s a well-rounded fighter,” Hardy said of Spivac. “You can’t get caught up on one thing with guys like this; it’s kind of the same way I went in with Tybura. He’s a game guy — he’s pretty quick, good with his wrestling, good with striking, and has good counter punches.

“My main thing is to give him the respect he deserves, but go into him — meet him in the middle and go to work; be ready to chase him, stay calm, but don’t make the same mistakes I did with Tai, and let it all unfold.”

And those are the only two ways Hardy sees this weekend’s main card opener playing out.

“It’s either going to be him running from me for three rounds and us trying to square it off when I catch up to him or it’s going to end early, man,” said Hardy, who has finished all but one of his seven career wins.

“I’m gonna catch him, and when I do, I’m going to make sure I don’t go in with too much anxiety and angst and try to knock him out too quick,” he added. “I’m going to go in smooth and calm and finish him strategically like we’ve been working on.”