Jordan Newmark continues his four-part series on the 2012 Olympics and its relation to the sport of mixed martial arts...today, Greco-Roman wrestling 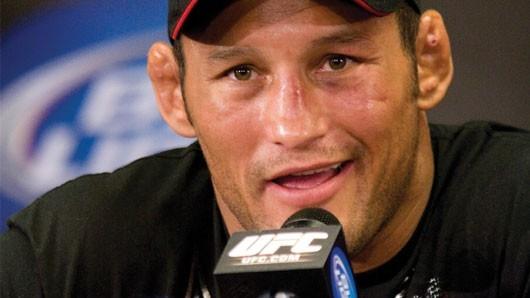 Dan Henderson. That’s all you need right there.

If one had to validate to a UFC fan how exemplary an elite background in Greco-Roman wrestling can be for a fighter, one would only need to mention “Hendo,” who, at 42 years old, will be facing UFC light heavyweight champion Jon Jones at UFC 151 on September 1st. The born and bred Californian has competed in MMA for 15 years, fought and won in three weight classes, won multiple belts and tournaments in multiple organizations (UFC, Strikeforce, and PRIDE), and still to this day is one of the toughest and most dangerous fighters around, one especially known for his granite chin and outrageous knockout power. Before his incredible nearly 40 fight career in the cage began, Henderson was a two-time US Olympian (1992, 1996), winner of several medals in international competitions like the Pan American Games and World Cup, and, truly, a lifelong wrestler.

“You definitely have to be dedicated,” said Henderson of being an Olympian. “You have to be able to learn and to get into shape and be able to do all the cross-training that is involved. I think that's why I'm so mentally tough, because I competed like that. Wrestlers in general are fairly mentally tough. The biggest thing is the dedication involved - the commitment. It was obviously one of my goals. It was something that I wouldn't trade for anything. It definitely made me much more of a patriotic person. There are all the countries there, and to represent the United States was awesome. Barcelona was my first time and I was 21 years old. I was really excited about it, but it didn't compare to wrestling for my country in my home country in Atlanta. I think I was the first American to compete, so the crowd was really waiting for an American to come out and it happened to be me.”

“I believe that Olympic caliber Greco-Roman wrestlers have an advantage in a lot of particular positions, but more importantly, at the highest levels everything is a fight,” affirms Lindland. “You fight for points that don't come easy, you fight to make it on teams, you are fighting to medal at the tournaments. You absolutely have to fight for every inch and the word used is literally ‘pummel’. These are some of the most mentally tough men I know.”

For the uninitiated, Greco-Roman wrestling is part old school brutal, chest to chest battling for positioning and it’s part gut-wrenching suplex superiority. It’s a brand of punishing physical endurance one wouldn’t wish on their worst enemy mixed with near herniating highlight reel lifts and slams. The event is also home to one of the single greatest moments in US Olympic history when Rulon Gardner won gold in Sydney in a 1-0 victory over the seemingly undefeatable three-time Olympic gold medalist Aleksandr Karelin. If the US team’s head coach and 1984 Olympics gold medal winner Steve Fraser has anything to say about it, the 2012 London Games will play host to a similarly dizzying and headline-grabbing effort by his current roster of wrestlers.

“We have high expectations and we truly believe that every one of these six guys can medal for sure,” states Fraser. “There is nobody on our team that doesn't have a chance. With that said, with two young guys who are totally unproven and a few veterans who have won, but haven't won in a few years - you never know. It never gets easy in this sport. Our expectations are to do well and what that means is five medals with at least two gold. If we were to do that, we would be the heroes of the world and have shocked everybody. Nobody in Greco wins five medals usually. The countries that are winning a team title in the World Championships are winning three medals and that's enough to win the team title. Our goal is for everyone to win a medal, which would be six, but, realistically, if we win three then we could win the unofficial Olympic team title.”

It comes down to six guys who will be worked to the bone by Fraser and his illustrious staff of assistant coaches to be ready to give it their all once the lights and cameras are on. Only three countries qualified all seven weight classes on their team and for the US that unattained spot is at 96 kg. The six for the US seem to be split down the middle of young blood or experienced. As mentioned, regardless of which category they fall in, Fraser’s job is to get them in the mindset that they’re going to end up on the medals podium.

The younger trio of Team USA is comprised of three first time Olympians: Ellis Coleman at 60 kg, Ben Provisor at 74 kg, and Chas Betts 84 kg. The latter, Betts, is a well-conditioned grinder from the University of Northern Michigan who won gold at the Pan American Championships earlier this year. In May, Provisor’s profile and confidence shot through the roof as he defeated 2008 Olympic gold medal winner Manuchar Kvirkvelia of Georgia at the Curby Cup. The youngest member of the team is the most famous pop-culturally as Coleman took the internet by storm after successfully landing a “flying squirrel” technique at the Junior World Championships. As US assistant coach and 1976 Olympic gold medal winner Momir Petkovic explains, Coleman’s strengths aren’t his theatrics, but his tenacity.

“On this team, we have younger kids who are just coming up like Ellis Coleman,” says Petkovic. “He is 60 kg. He is a two-time Junior World Bronze medalist. Very focused, very hungry, very determined, loves it so much. This is his first Olympics. He is young, only 20-21 years old, and, hopefully, he will be able to pull out a surprise for us. We know how much he can do, but for the rest of the world this will be his first big, major international competition. I can definitely see Ellis Coleman in MMA. He's got that killer instinct. He's just a unique, unique, unique guy. I've been in this sport for like 50 years and not that many I see like him. I never see anyone have a major surgery, broken ankle, screws, ligaments, four hour surgery. And then the next morning he's in the gym lifting, push-ups, sit-ups, like what the [expletive] is going on with this kid? Where is he coming from? Just a very unique, unique, unique person.”

The leadership of the US team obviously comes from its experienced half of three top candidates for medals in their respective weight classes: Spenser Mango at 55 kg, Justin Lester at 66 kg, and, team stalwart Dremiel Byers at 120 kg. For Mango, a second appearance at the Olympics mixed with his copious amount of World Championships experience and still being only 26 years old should mean trouble for the rest of the competition. Don’t call him “Harry” anymore, as the 2x World bronze medalist, Lester, has proven he is one of the elite at his weight and is highly motivated to prove that in London after shockingly missing out on the team in Beijing. The final and heaviest member of the team is also one of the most decorated wrestlers in country history, as Byers owns a bronze, silver, and gold medal from the World Championships. These three will look to their vast experience to help themselves as well as to guide each other to the ultimate achievement of Olympic glory.

“The Olympics are so special,” asserts Petkovic. “The first time at the Olympics it is overwhelming. Suddenly, you're in the middle of 10,000 athletes and you don't know what you need to do. One thing we try to work with them on is them trying to keep cool and know that this is just another tournament. Get ready to raise your individual game to the level for you to be able to function at the best you can. Everyone at the Olympics has a dream of winning the gold medal. It doesn't matter if they've did anything before or if they didn't do anything before. It doesn't matter where their ranking is before. That all falls apart when the competition starts and anything can happen against anyone at any moment. An 18 year old kid can go in there and kick some ass against a two-time World champion. It's a totally different competition. The whole world is waiting for this and ready to declare, ‘this is my time’.”

In MMA, the buzz word for wrestlers is “control”. Fighters with frightening wrestling talent like past and present Olympians have the ability to dictate where a fight takes place or doesn’t take place. That is an added benefit during a fight, and for a career, as wrestlers can keep themselves out of harm by controlling the action, which can potentially lengthen their career. On top of that, wrestlers are molded over thousands of hours of acclimating themselves to the pain of training and competing. After years of grinning and bearing it in wrestling rooms and day long tournaments, fighting one fight in a cage in one night doesn’t seem so bad.

“It is a fact that the daily grueling training that wrestlers have to go through to become great wrestlers is such a benefit in the MMA world,” explains Fraser. “The conditioning factor alone, both physically and mentally. There is no other sport in the world that requires such grueling training as wrestlers. Wrestling is constant, non-stop attack. The conditioning factor from wrestlers is just huge. There are no better conditioned athletes, mentally and physically, than wrestlers.”

Beginning August 5th and ending August 7th, a sport will take center stage that is one of the most utterly excruciating and muscularly demanding you’ll ever see. As the former two-time member of the US Olympic team, Henderson, prepares to drop an “H-bomb” at his UFC 151 showdown on a champion who is 17 years his junior, fight fans should watch the wrestling event that made this old man “Hendo” so damn tough.