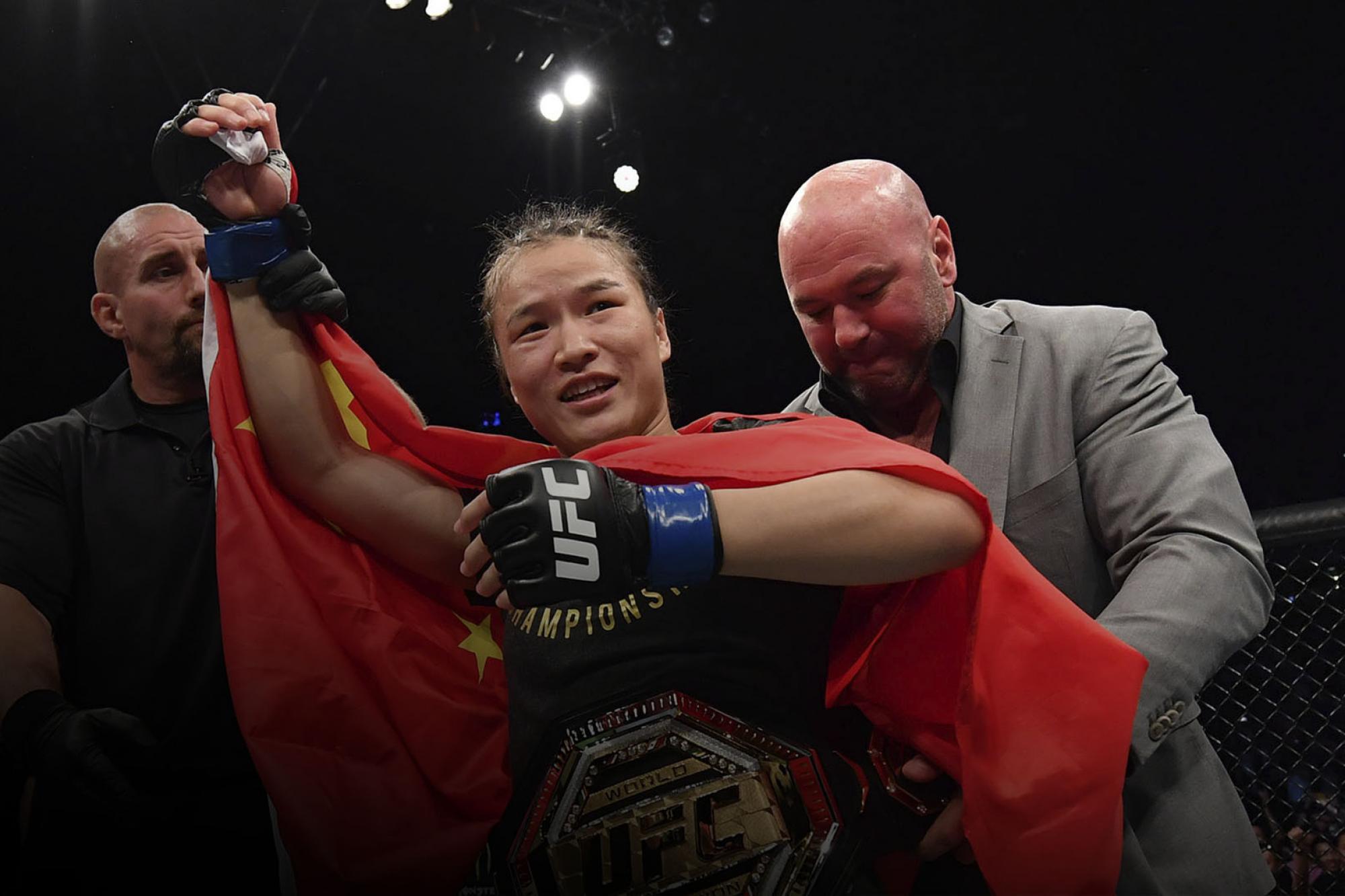 They Kept It Out Of The Hands Of The Judges On The Way To UFC Gold
By E. Spencer Kyte, on Twitter @SpencerKyte • Mar. 7, 2020
UFC 175: Ronda Rousey KO1 Alexis Davis

Davis actually landed the first good shot of this fight – a clean jab that popped Rousey’s head back as they first started to exchange in the center of the Octagon.

Unfortunately for the Canadian challenger, the champion connected with an overhand right a couple seconds later, followed it up with a beautiful hip toss and a torrent of unanswered punches that left Davis trying to take down referee Yves Lavigne after he’d stepped in to stop the fight.

This was the most dominant performance of Rousey’s career and remains – in my opinion – the perfect encapsulation of what she was capable of inside the cage when she was at her best. The punch that started it all wasn’t anything special, but she quickly recognized the opportunity in front of her and went into finishing mode, hitting a powerful throw before pounding out the win.

Rousey was never better than in this fight if you ask me.

In the days leading up to the fight, Jedrzejczyk told everyone not to worry about learning how to properly pronounce her last name because after UFC 185, they were all going to be able to call her “Joanna Champion.”

Then she went out and made it happen.

You could see the moment Esparza knew she was in trouble; it was like the slow-motion replay of Ralph Wiggum’s heart breaking in that Valentine’s Day episode of The Simpsons. She couldn’t get Jedrzejczyk to the ground – couldn’t even get close to completing a shot – and as the denials started to pile up, she knew it was not her night.

And that’s when Jedrzejczyk unleashed hell.

While her follow-up performance against Penne was more vicious, this one was the eye-opening start of a 32-month reign atop the division. 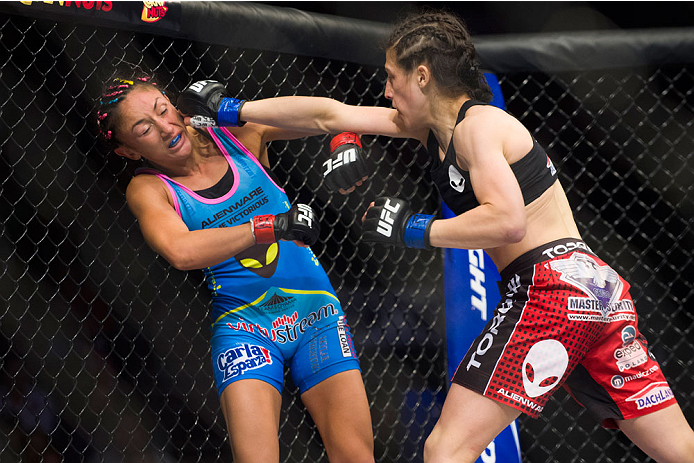 The actual finish is the moment burned in everyone’s collective memory – Holm’s left foot landing flush on the side of Rousey’s neck, sending the unbeaten champion crashing to the canvas in a heap – but just as with Rousey’s unsuccessful comeback fight against Nunes 13 months later, the outcome of this one was determined well before the actual finish took place.

Rousey’s aggressive approach played right into Holm’s strength as a counterpuncher and the even-keeled former boxer took full advantage of the champion’s willingness to charge into the fray. By the end of the first, Rousey, bleeding from the mouth, looked spent and Holm appeared to be in complete control.

The short, sharp left that battered Rousey in the first returned early in the second and when made like a matador and ducked out of the way of the champion’s wild charge forward, you got the sense a new champion was going to be crowned.

Twenty seconds later, it was over. Holly Holm had shocked the world.

I was midway through a paragraph about Tate once again coming up short in her quest to win UFC gold when she spun Holm to the ground in the center of the Octagon with about two minutes left in the final round. Thirty seconds later, I was writing about Tate’s improbable come-from-behind victory and how raw and powerful it was to see her collapse into tears in the cage when the fight was over.

While most people will probably always remember Tate for her rivalry with Rousey, this performance was emblematic of her professional career and should be her calling card. She always kept pressing forward, always kept chasing her championship dreams and her success was due as much to her heart and moxie as it was her athleticism and skill in the cage. 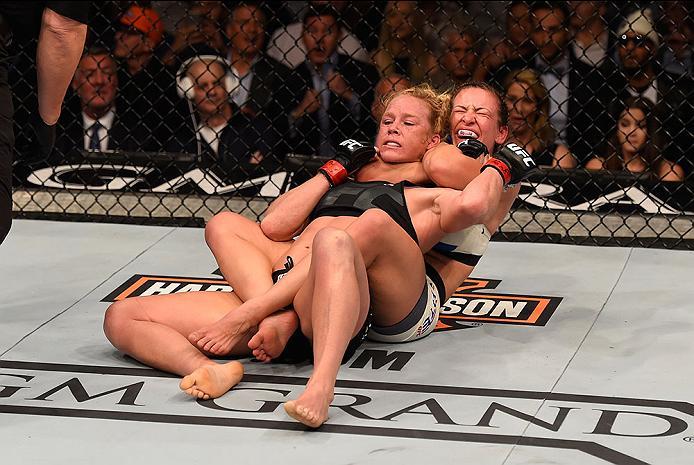 For me, this is the best women’s championship performance no one ever seems to talk about and that’s surprising to me because it was a truly breathtaking performance in the midst of a tornado and the starting point for Nunes’ championship reign that continues to this day.

The fight was promoted to the main event of the summer blockbuster at the 11th hour and while Tate was the one in the spotlight heading into the cage, Nunes stole the show.

The Brazilian challenger rocked the champion with clean, powerful shots early and refused to give her time to recover. She stalked Tate, picking her off with more heavy shots each time an opening presented itself and once the damage started to pile up and the action hit the floor, Nunes quickly sunk in the choke, squeezed out a tap and claimed the bantamweight title.

Nunes was brimming with confidence and fueled by frustration, annoyed that she was cast as a supporting character in the lead-up to the fight despite being the reigning champion and coming off a dominant effort five months earlier. Rousey, meanwhile, hadn’t fought in 13 months, adding to the intrigue surrounding the UFC 207 main event.

“The Lioness” connected with powerful shots right out of the chute that left Rousey reeling. As she tried to return fire, Nunes continued to march her down and crash home punishing blows, turning Rousey’s comeback fight into her own coming out party.

The first time Namajunas fought for the strawweight title, she wasn’t ready. She was still too young, too raw, too unpolished and Carla Esparza took full advantage, wrestling Namajunas to the canvas again and again before finally putting her away just under 90 seconds into the third round.

But Namajunas was a different fighter when she stepped into the Octagon to fight for the title for a second time. Trevor Wittman’s teachings had taken root and the former elite prospect picked a grand time to show the world that she’d finally put everything together.

Amanda Nunes rocked Cris Cyborg early and often in their UFC 232 SuperFight, with the right hand being the weapon of choice for “The Lioness.” When the final blow landed it was clear that the fight was over, and it was a shocker as Cyborg lost for the first time in over 13 years. 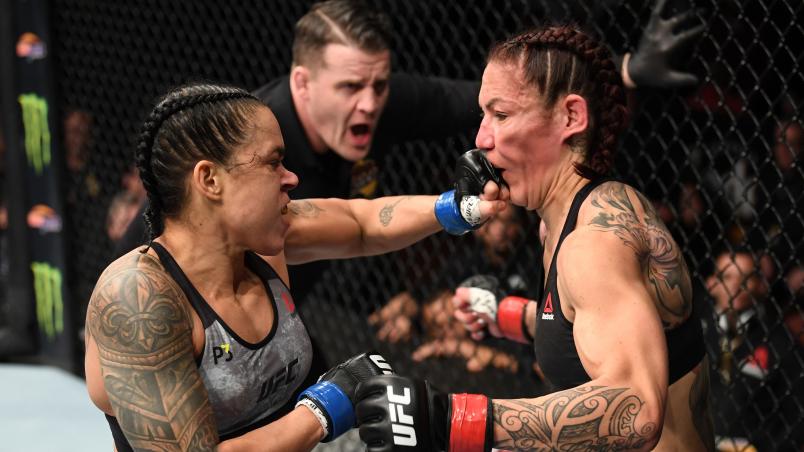 After fighting past plenty of adversity in the first round of her UFC 237 main event, Jessica Andrade stopped Rose Namajunas in the second round to become the UFC strawweight champion.

The stick and move attack of Namajunas continued to pay dividends in round two, and while Andrade kept throwing and charging, too often the Brazilian was left hitting air. But as the two locked up against the fence, Andrade again lifted Namajunas for a slam, and this time it hit in devastating fashion, as Namajunas landed on her head and was stunned. Two strikes followed, with referee Marc Goddard stopping the fight at the 2:58 mark of the second round.

In the UFC 238 co-main event, Valentina Shevchenko successfully defended her UFC flyweight crown for the first time in emphatic fashion, knocking out No. 1 contender Jessica Eye in the second round. Shevchenko’s opening body kicks landed with a thud, immediately getting Eye’s attention. Moments later, Shevchenko scored a takedown and went to work. Eye made it back to her feet with a little over a minute left, but Shevchenko scored another takedown and kept Eye grounded until the end of the round. Shevchenko started the second round the same way she began the first, but then she moved her kick upstairs, and a flush left to the head put Eye down and out in frightening fashion. The official time of the knockout was :26 of round two. 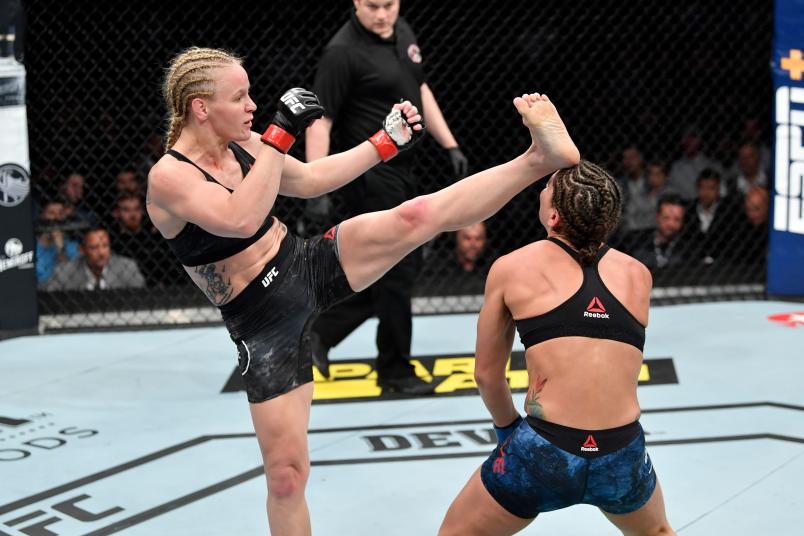 If there was supposed to be a post-Cyborg letdown for the UFC’s newest Double Champ, Nunes didn’t get the memo, as she dropped back down to 135 pounds and successfully defended her bantamweight title with another SuperFight knockout taking less than a round, this one of Holly Holm. That win made it nine in a row for Nunes, and beating six UFC champions, two Olympic medalists and one three-division boxing champion made a rock-solid case for Nunes as the greatest of all-time in women’s combat sports. 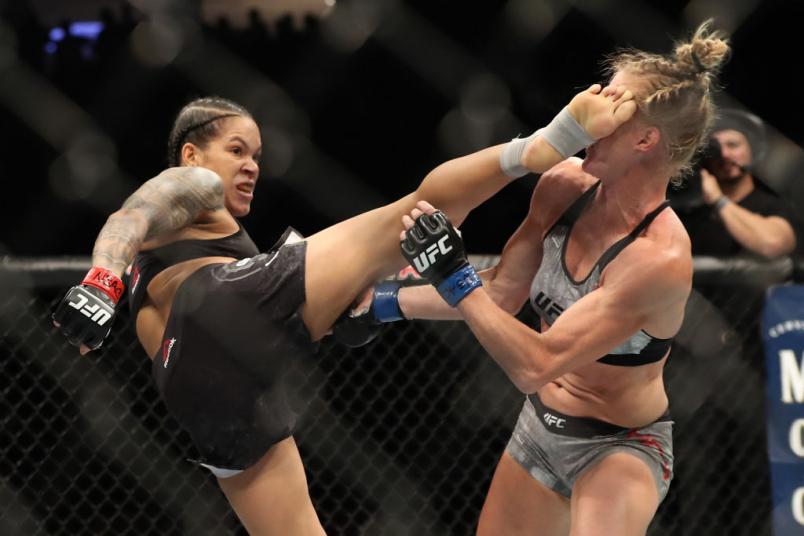 Less than four months after winning the strawweight title at home in Brazil at UFC 237, Andrade looked to successfully defend her belt for the first time on the road, venturing to Shenzhen to face the streaking Chinese rising star Zhang in Saturday’s main event.

Zhang started quickly, finding a home for a series of low kicks that drew Andrade forward and when the two began to exchange, the Chinese challenger found a home for her right hand, stinging the champion and putting her on the defensive. While Andrade tried to fire back, Zhang was unrelenting, attacking with knees from the clinch and punches as the Brazilian stumbled backwards.

With Andrade on the canvas and Zhang pouring it on, referee Leon Roberts was forced to step in and stop the fight, giving China its first UFC champion and Zhang her 20th consecutive victory, none bigger than this one.