The Greatest Feats in UFC History 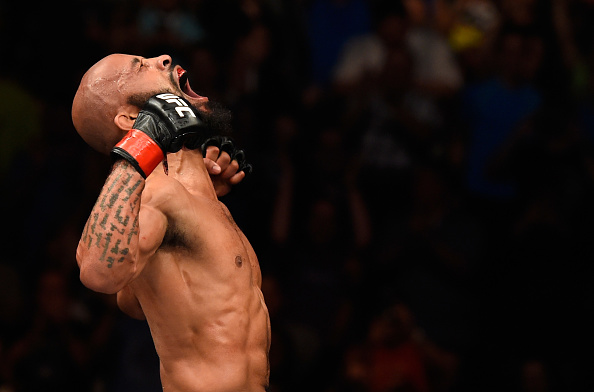 Demetrious Johnson celebrates his submission victory over Wilson Reis of Brazil in their UFC flyweight fight during the UFC Fight Night event at Sprint Center on April 15, 2017 in Kansas City, Missouri. (Photo by Josh Hedges/Zuffa LLC)" />
On Oct. 7, Demetrious Johnson will look to make history when he fights Ray Borg at T-Mobile Arena. On the line isn’t just Johnson’s flyweight title, but with a win, “Mighty Mouse” will set the record for most consecutive UFC title defenses. Those are some high stakes in Las Vegas, and in anticipation of UFC 216, we take a look at that record and nine more of the greatest feats in UFC history.

Mighty Mouse and The Spider reign supreme
There’s no better place to start than with a tie that may be broken at UFC 216 when Demetrious Johnson attempts to become the first fighter in history to successfully defend a UFC title 11 times. Think about that. Johnson and the man tied with him at the top, Anderson Silva, took on the best contenders as champions ten times and beat them. These are fighters that had a target on the champ for years, studying and preparing for that moment in the spotlight, and still, Johnson and Silva got the job done. Having longevity in this toughest of sports is one thing; having that longevity with a championship belt around your waist is all-time great territory. 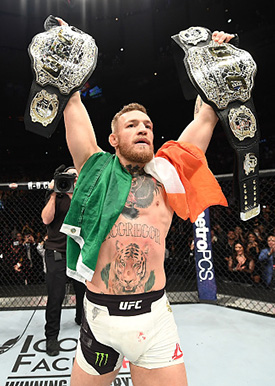 Conor McGregor of Ireland celebrates after defeating Eddie Alvarez in their UFC lightweight championship fight during the UFC 205 event at Madison Square Garden on November 12, 2016 in New York City. (Photo by Jeff Bottari/Zuffa LLC/Zuffa LLC)" align="left" />Winning one championship in the UFC is tough. It’s not like boxing, where there are four major sanctioning bodies with their own champions, not to mention some breaking these titles down into Super champion, champion in recess, etc. So to get to the top in the Octagon isn’t easy. To do it in two weight classes amps the degree of difficulty up considerably. To do it simultaneously? That’s near impossible, but Conor McGregor specializes in that kind of stuff, and at UFC 205 last November, he added the lightweight title to his featherweight title when he defeated Eddie Alvarez. Yes, he eventually relinquished the 145-pound belt, but for that night in Madison Square Garden, McGregor was king of the world.

The Iceman Wrecketh
Chuck Liddell’s status as one of the greatest knockout artists in UFC history is well established, but it was during a remarkable run from 2004 to 2006 in which “The Iceman” cemented his legends. During that stretch, Liddell went 7-0 with seven knockouts against top level opposition like Tito Ortiz (twice), Randy Couture (twice), Vernon White, Jeremy Horn and “Babalu” Sobral. If there’s any record in the UFC that may not be in jeopardy anytime soon, it’s this one. 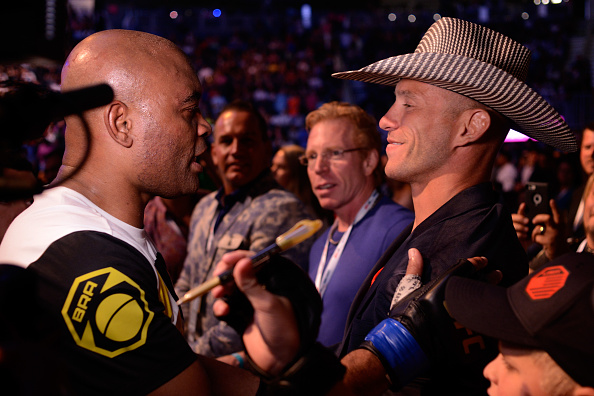 Anderson Silva entered the UFC in 2006 as a fighter unknown to all but diehard fight fans. That changed in the space of 49 seconds when he knocked out Chris Leben. In his next fight, “The Spider” won the UFC middleweight title, and he wouldn’t lose the belt and his 16-fight Octagon winning streak until 2013. Now there are a couple fighters closing in on that record, namely Demetrious Johnson and Georges St-Pierre at 12, and Max Holloway at 11. But to equal it, DJ and GSP have to win four more times and Holloway five times. That’s a long time, and a reminder of how special that streak is.

The reinvention of Randy Couture
Randy Couture was done. Yes, he had a good run in the UFC, winning the heavyweight title twice, but after getting halted in consecutive fights by Josh Barnett and Ricco Rodriguez in 2002, the MMA world was ready to bid a fond farewell to “The Natural.” Couture wasn’t done yet, though, and he soon scheduled a drop to light heavyweight to face Chuck Liddell just days before his 40th birthday. Fight fans groaned, seeing this as a last ditch effort to salvage his career against a 205-pound wrecking machine in Liddell. This wasn’t going to end well. But then Couture halted Liddell in three rounds to take the interim light heavyweight crown, and three months later he unified the title with a dominant win over Tito Ortiz. Couture would go on to fight until 2010, winning the heavyweight title a third time in the process. But it was those two fights in 2003 that made it all happen for the UFC Hall of Famer.

Cerrone’s Super Six
In a sport filled with unique individuals, Donald “Cowboy” Cerrone is a different cat altogether. Someone who actually lives up to the “I’ll fight anyone, anytime at any place” adage, Cerrone lives this game more than anyone around. And while he usually keeps a steady four fight per year schedule intact, from his last WEC fight against Chris Horodecki in December 2010 to a December 2011 loss to Nate Diaz in the Octagon, he made the walk a remarkable six times. That means if the typical training camp is eight weeks, Cerrone was in the gym or a fight for 12 months. Oh yeah, and he went 5-1 in those bouts with four post-fight bonuses. Oh Cowboy, never change. 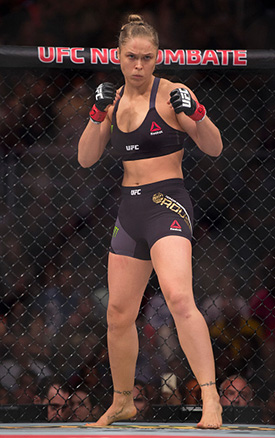 Ronda Rousey of the United States stands in her corner before facing Bethe Correia of Brazil during the UFC 190 event inside HSBC Arena on August 1, 2015 in Rio de Janeiro, Brazil. (Photo by Jeff Bottari/Zuffa LLC)" align="left" />There are some who will look at Ronda Rousey’s last two fights against Holly Holm and Amanda Nunes and dismiss what she did in the previous six. That’s unfortunate and a disservice to the former women’s bantamweight champ, who was a wrecking machine in those first six Octagon bouts, winning all of them by knockout or submission, with only one fight getting out of the first round. And Rousey wasn’t fighting pedestrian competition, as her streak included wins over an established former champ (Miesha Tate), veteran contenders (Alexis Davis and Cat Zingano) and a fellow Olympian (Sara McMann).

The Tournament King, Royce Gracie
To be the man who put MMA on the map in the early 90s would have been enough to land Royce Gracie in the UFC Hall of Fame, but it’s how the Brazilian icon did it – not with some big title fight wins or epic wars with his peers, but by fighting multiple times a night and beating those peers. Three times, at UFC 1, 2 and 4, Gracie put on his gi and vanquished a series of foes with precious little rest time in between each fight. In those three tournaments alone, he fought (and won) 10 times. Some UFC careers don’t last that long, and Gracie fought those ten times in three nights, beating fellow Hall of Famers Ken Shamrock and Dan Severn along the way.

The Bonus Boys - Lauzon and Diaz 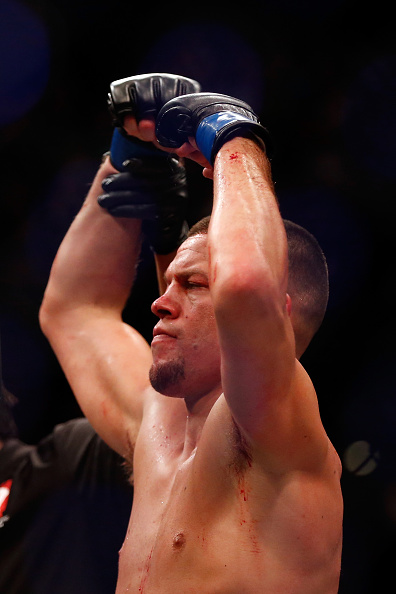 The casual fight fan might think it’s a fairly easy thing to go into the Octagon and put on an exciting fight or deliver a highlight reel finish. It’s not. To get Fight of the Night, it takes two competitors with the same desire and drive to put it all on the line for 15 minutes or less. To finish a skilled, UFC level fighter, it’s about taking risks and putting yourself in the line of fire to end a bout by knockout or submission. So to pull off a post-fight bonus winning performance once, twice or a few times in a career is impressive. To do it 15 times is pretty much off the charts, or in the case of Joe Lauzon and Nate Diaz, at the top of the charts. Simply put, these guys are searching for finishes every time, and if they don’t get it, it’s likely because they’re in there with an equally ambitious foe, and that’s when the Fight of the Night stuff comes in. There are few sure things in combat sports, but a fight or performance to remember from Lauzon and Diaz is one of them.

Magny and Huerta go five for five
The first goal for mixed martial artists is to make it to the UFC. The next one is to win there. What happens from there is a rollercoaster. Some win titles, some never win in the Octagon again. And while Roger Huerta never won a title in the UFC and Neil Magny is still searching for that elusive gold, both fighters did something in 2007 and 2014, respectively, that may never be equaled. First off, very few people not named Donald Cerrone or Cynthia Calvillo will want to fight five times in a year, let alone be able to win all five. But that’s what Huerta did in the lightweight shark tank in 2007, a year in which he hit the cover of Sports Illustrated and earned Fight of the Night bonuses against Leonard Garcia and Clay Guida over the course of five wins. Seven years later, it was Magny’s turn, and after a rocky start to his UFC career in 2013 that saw him go 1-2, he drilled off a quintet of victories capped off by a TKO of William Macario that tied him with Huerta.