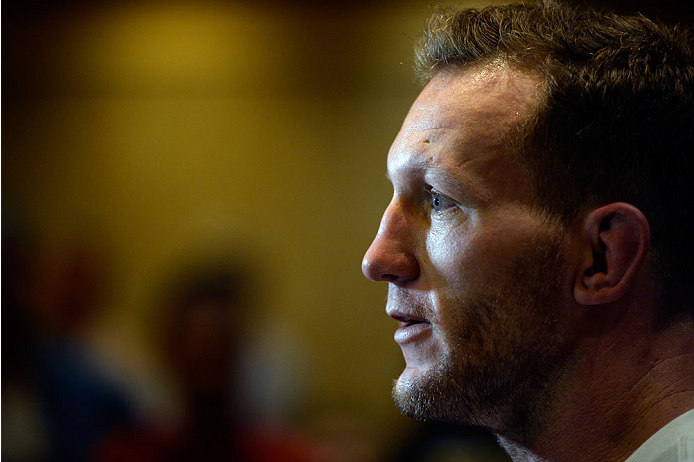 If you listen to the doubters long enough, it’s very easy to start doubting yourself. Gray Maynard isn’t going that route as he approaches his UFC Fight Night matchup with Alexander Yakovlev this Saturday in Fairfax, Virginia. He remains committed to his craft and to the idea that one day he will put a UFC championship belt around his waist, despite the naysayers that are calling this a must-win situation for him after three consecutive losses.

Behind the scenes, the 35-year-old had a lot going on over the last couple years that for most people would be seen as good things. He relocated from Las Vegas to Santa Cruz, California, he and his lady welcomed a daughter into the family, and he renovated his new home out west. All good things as long as you’re not trying to have a successful fighting career at the same time. Of course, while Maynard is losing fights to TJ Grant, Nate Diaz and Ross Pearson, he’s still the same stubborn competitor that he always was, assuming that his talent and determination will see him through.

It didn’t. Not this time. And he finally came to grips with the reasons why.

“I moved up to Santa Cruz, and maybe I was half-in and half-out,” he said. “I bought a house I had to completely re-do and I did it all on my own. I had a new baby, and my Plan A was obviously MMA, but my Plan B and Plan C were to open up a gym and start a family close to the beach. And Plan Bs and Cs distract from Plan As. Maybe I was just overconfident, feeling that I could do all of that and still compete. I think I could have still competed with guys, but not guys in the top ten, with all those distractions and that commotion.

So all of a sudden, one of the top lightweights in the world, a fighter who was a punch or two away (twice) from taking the 155-pound title from Frankie Edgar back in 2011, had become a cautionary tale, with his only win since 2010 being a split decision victory over Clay Guida in June of 2012. And while some fans and media called for Maynard to walk away from the sport after three knockout losses in a row, and just assumed that the former Ultimate Fighter 5 competitor was ignoring the reality of the situation, that simply wasn’t the case, as no one took all of this as seriously as he did.

“Obviously, losses are a big deal, and when you’re dealing with a family and my parents, I go through a depression a little bit right after,” he said. “I go through depression after wins if I don’t do what I’m supposed to do.”

We both laugh after that statement, breaking up a serious chat about whether he wanted or was going to be forced to leave the sport he loves. See, Maynard is a competitor, has been since he was a child, and it’s not something you can just turn on and off. But when you’re in your mid-30s and have a family, it’s not about you anymore. Maynard knows it too, and while he admits that “It’s not an actual depression,” he wasn’t happy about what he brought to the Octagon in those last three fights, and he had to ask himself some hard questions.

“We all talk,” he said of the post-fight conversations with his family. “I talked to my parents, I talked to my girl, to my coaches, and I got a feel for where people were at. And the knee-jerk reaction for all of us right after is ‘aw, it’s just not worth it anymore, the juice isn’t worth the squeeze.’ But then you start to mellow out and understand, and go ‘wait a second, I was remodeling a house 12 hours a day, then jumping into camp,’ and you start to put it all together and go ‘did I give myself a chance to be the best that I can be?’”

He wasn’t, and if you’re not all-in when it comes to this sport, you might as well be all-out. And when Maynard talks about fighting and his recent past these days, you can hear that the competitor is still there, stronger than ever.

“You can go back though all my bouts and there was never a round or a time where a guy dominated me,” he said. “Obviously, there have been times where guys clipped me and beat me, but there was never a time when I was just outclassed. And even in my practices, not that I keep a tally on it, but I’ve never felt a person handle me or beat me to where I’m like ‘well, that guy’s just better.’”

Sometimes, that’s all you need. At this level, everyone can fight. It’s the fighter who brings the intangibles on the night that often succeeds, and for Maynard, the main intangible that he’s bringing to Fairfax is the peace of mind that comes with doing everything possible to win a fight.

“The moment of reality is when you’re walking into the cage,” he said. “Did I do my game plan, did I do my homework? And with every checkmark that you have, your confidence grows. With every question mark, it decreases.”

So how did those checkmarks begin adding up once more? It began with a move back home to Las Vegas.

“Santa Cruz is nice,” he said. “It was a great time, we met awesome people, and we learned a lot. Most importantly, we learned that it’s home here in Las Vegas. It’s a great town because it is what you want it to be or choose it to be. And we’ve got our niche, we’ve got our cousins and parents here, and it’s a lot more calm.”

It’s also home to the revamped Xtreme Couture gym, which is a lot different from when Maynard left in 2012.

“When I kinda got going there, it was a really good place to train, a tight group of guys and then it kind of hit a plateau, and that’s when I think everybody just took off,” Maynard said. “Then Eric Nicksick took over as GM, (Ray) Sefo was still there, they brought in (Robert) Follis, who was the old Team Quest coach, and I came back and it was better than it’s ever been, just because it has a tight group of guys now and it’s just very organized. Everybody’s on time, and there’s a plan for every practice. It’s turned into a business, where everybody’s a team and going to the goals that are outlined.”

So what are Maynard’s goals now? First, there’s the business of beating Yakovlev, a former welterweight now trying to right his own ship in a new division after losing his first two UFC bouts in 2014. Nothing else happens without that. But while big fights and titles are nice, Maynard’s hope is that he will show off a fighter that he believes we haven’t seen yet.

“My goal now is to be the best that I can be, and I still feel that nobody’s seen that as of yet in the Octagon,” he said. “I really haven’t put it together the way that I need to and the way that I can. So that’s my goal. And if a person beats me when I do that, I’ll know that that guy’s better than me, and then maybe it’s time. I don’t know. But until that, I want to give the best Gray that I can, and if that happens, I know I can be a champ. But I don’t want to talk about that now; I just want to get my camp going, get my training going, get a couple wins and start getting that flow going.”