Gray Maynard - Time to Get Back to Work

"I’ve got some new tools, and some new approaches, so it’s just — I’ve been away from home for a long time. That’s how I feel." - Gray Maynard 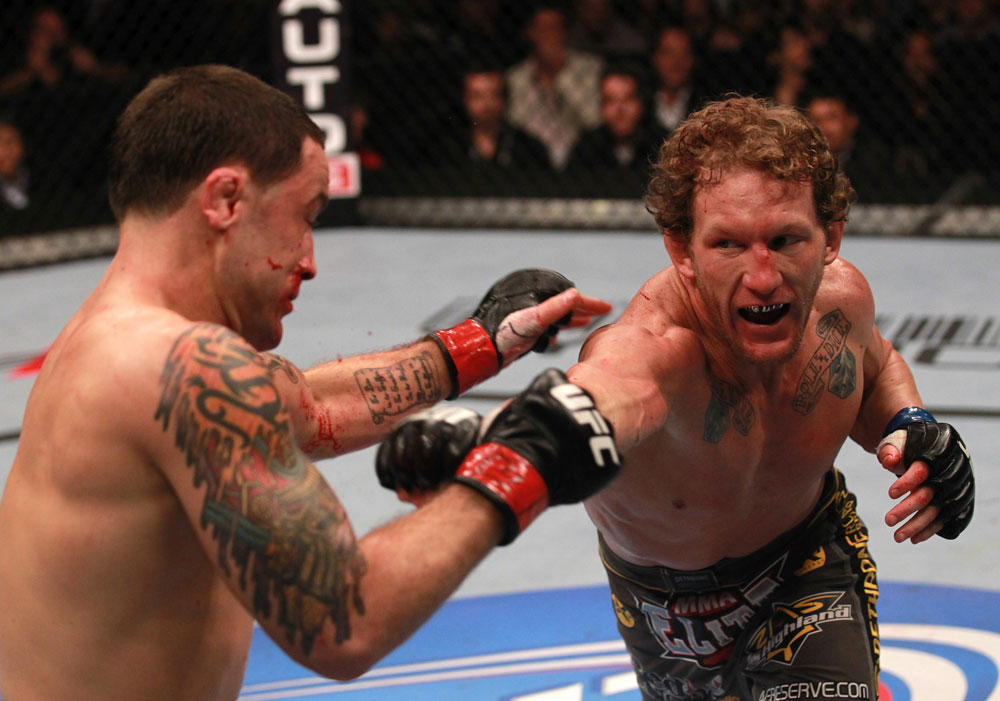 On the first day of the year, the UFC lightweight title challenger carried an undefeated record into the Octagon against champion Frankie Edgar, and used the first five minutes of their contest to batter “The Answer” around the cage at will, coming as close to putting away a fighter as you can without having the bout actually be stopped. One minute later, Edgar bounced back into the center of the cage as if the first round didn’t even happen.

Over the next 20 minutes, the two went toe-to-toe, blow-for-blow, round-for-round until the outcome of the main event from UFC 125: Resolution was that we had no resolution.

After the two battled to a draw, Maynard initially looked like he was going to be bumped back in line in favor of Anthony Pettis before UFC President Dana White made the logical decision of booking an immediate rematch between champion and challenger. Spring injuries pushed their fight back to UFC 136 in October, where Maynard once again had Edgar on the ropes in the first, but couldn’t put the resilient New Jersey native away. This time, however, Maynard didn’t depart with a draw.

Coming out of a scramble just past the midway point of the fourth round, Edgar caught Maynard on the button, sending him staggering into the cage. A swift barrage of punches brought the fight to a close, halting Maynard’s hopes of leaving Houston with the lightweight belt around his waist, and ending his unbeaten run all at once.

Following the bout, news of Maynard’s departure from Xtreme Couture surfaced. While it was a decision he’d made prior to the fight and planned to stick to win or lose in Houston, uprooting from his long-time home base was just another headache that made 2011 a year the former Michigan State Spartan is ready to put behind him.

“When you have a year like that or you have some issues like that, it’s always good to change up, and re-evaluate,” offers Maynard, now eight months removed from UFC 136, and preparing to return to the cage to face Clay Guida in the main event of this Friday’s UFC on FX event from the Revel Casino in Atlantic City, New Jersey. “If it’s good for you to stay in the place or you have to stay in the place, you change up what you’re doing there, or if you think it’s better to move, do it. For me it’s been great.

“When you’re at the top of the game, like me and whoever else, you gotta have good training. With all this stuff I’d dealt with before my last bout — leaving the gym, and all of that stuff — I was kind of all over the place for where I trained, how I trained, who I trained with, and that kind of hit me that I can’t half-ass this at all. I really knew I needed to get to a place — and it’s not easy to just pick up all your stuff and move. It takes a couple months.”

Now comfortably situated in Santa Cruz, California, Maynard has spent the last several months taking advantage of the opportunity to train with new people, and try new approaches, re-igniting his passion for the sport, and taking the first steps towards once again challenging for the UFC lightweight title.

“I was in that town for the purpose of like,” he says of Las Vegas, “but I think I over-stayed my welcome as far as (training there) because I really did hit a plateau for a couple years, and you’ve gotta be quick to know that, and you’ve gotta adjust. For me, it was moving out here, and changing pace, and lifestyle, MMA teams, everything.

“I had an opportunity to go and train with Nova Uniao, so I took that,” continues Maynard, laying out the timeline of what he’s been up to since he last stepped into the cage. “I went to Brazil, went to AKA, moved, and just had to re-invent how I train, how I work, and it’s been great. It’s been awesome; I love it. I’m back in the gym learning, and just pumped about how I learn. It’s been a good thing for me.”

One of the changes Maynard made was connecting with strength and conditioning coaches Marv and Gary Marinovich. Fight fans are familiar with the duo from their time working with former lightweight champion BJ Penn, and credit “Team Marinovich” for helping “The Prodigy” get into the best shape of his career, while football historians will remember Marv for his extensive and intensive work with his son Todd, a former California high school standout and quarterback at USC who was a bust as a pro.

“They have a great deal of knowledge in their area,” Maynard says of The Brothers Marinovich. “That’s what I think we should do as athletes is try to look for the people that know what they’re talking about in those areas, and they definitely have new ideas, new ways, and for me it was awesome. We worked a lot together for a time period, and for me, when it gets closer to my bout, it’s time for the MMA part, and the hard sparring, and a lot of that type of stuff. It had its place, and it definitely changed how I view a lot of things.”

Friday night, Maynard gets the chance to put all that he’s learned over the last eight months to use when he steps in opposite Guida.

Like Maynard, the ball of constant motion, between-round-belches, and wild hair nicknamed “The Carpenter” is returning to the cage following an extended hiatus. After riding a four-fight winning streak into the co-main event slot on the first UFC on FOX event, Guida’s momentum was halted by Benson Henderson, who went on to wrest the lightweight title away from the man Maynard will forever be linked with in MMA history.

Though the 155-pound weight class remains stocked with talent and is never short on potential contenders, Guida and Maynard remain fixtures in the upper echelon of the division, which is part of the reason the 33-year-old Maynard is excited about the opportunity to step into the cage with The Big Lebowski’s biggest fan on Friday night.

“I’m really pumped about it,” Maynard says, his flat delivery making it hard to discern whether he’s being genuine or sarcastic until he expands on his initial response. “It’s a great opponent, and it’s an opportunity to beat him at his game, which is main event, five rounds of back-and-forth. It’s an opportunity to prove that I can beat whoever. I’ve got some new tools, and some new approaches, so it’s just — I’ve been away from home for a long time. That’s how I feel.”

Having fought for the title twice last year and come away empty, some may wonder if Maynard may have landed in a state of lightweight limbo, something akin to Joseph Benavidez’s stay in bantamweight purgatory following his two losses to Dominick Cruz or Rich Franklin’s departure from middleweight title contention after dropping a pair of contests to Anderson Silva.

It’s a legitimate concern, but not one that worries Maynard. Though his immediate focus is Friday’s contest with Guida, he’s willing to do whatever it takes get back into title contention, no matter how long it takes.

“(Right now), my whole goal is Clay, but for sure the long-term is beat the people I have to beat to get to the belt again. If you do that, it’s gonna happen; there’s no choice. If you beat all the top guys, where else can they put me? For me, I’ve gotta do it with authority, and prove that I deserve another title shot. And that’s fine — that’s a chore that I’d love to do.”

Some fighters refrain from really discussing their losses, sticking to clichés like “It is what it is” and “I’m only focused on the future” when questions about their setbacks arise. Maynard isn’t one of those people. Rather than dismiss his two failed attempts to capture the lightweight title in 2011, Maynard admits the sting still lingers, but opts to take a philosophical approach to last year’s results.

“There’s always pain there, and you’ve gotta use that to help drive you. It’s that old Thomas Edison deal: “I failed 10,000 times, but I know 10,000 ways not to make the light bulb.” For me, you learn a lot off of doing stuff a bad way or screwing up on a couple things. You learn what not to do, and that just kind of narrows it down to what you do have to do, and that makes it easier, man. That’s experience, and experience is priceless.”

Relocated and refocused, Maynard’s really just looking forward to getting back to work.

“I’m just happy to get back in there. A five-round fight? That’ll be fun!”