Gray Maynard: The Bully is Back 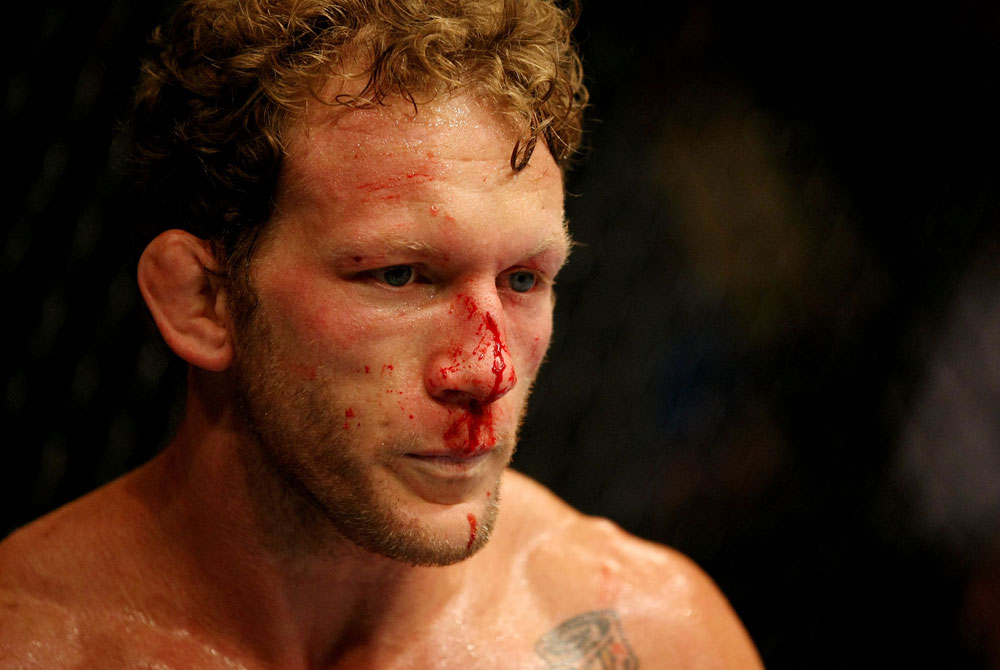 That was the last time “The Bully” bullied someone around the cage en route to a victory.

That night, at the TD Garden in Boston, Massachusetts, Gray Maynard dominated hometown boy Kenny Florian to earn his 11th victory, and a shot at the UFC lightweight title. A trio of outings has followed, each one painful for its own specific reasons.

There was the championship draw with Frankie Edgar at UFC 125 on the first day of 2011 – a bitter pill to swallow given the one-sided nature of the first five minutes, and made worse after the bout when it seemed like a rematch wasn’t in the cards.

A rematch did take place, but it was worse. The opening stanza of the UFC 136 main event was eerily familiar – Edgar being knocked around the cage once again, seemingly one shot away from being finished.

Just as he did 10 months and seven days earlier, “The Answer” recharged between frames, but there was no draw to be had this time around. Edgar was first to his feet coming out of a fourth round scramble, and he connected with an uppercut. Several lefts later, the zero in Maynard’s loss column was gone.

It would be eight months before the former title challenger returned. In the interim, he had parted ways with Xtreme Couture and left Las Vegas. He moved to California, setting up shop in Santa Cruz, but never establishing a fixed address for his training.

His return bout with Clay Guida in the main event of the June UFC on FX fight card in Atlantic City, New Jersey was awkward, and that’s putting it mildly.

Guida employed a stick-and-move style that heavily favored the move portion of that combo, forcing a frustrated Maynard to chase him around the cage for the better part of 25 minutes. They combined to land just 101 strikes of the 556 thrown in the five round affair according to Fight Metric, with the 33-year-old former Michigan State Spartan capturing a split decision victory in a bout that everyone would sooner not discuss.

Maynard has been out of action since.

A persistent hamstring issue and a knee injury that required surgery forced him from a bout with Joe Lauzon at UFC 155, leading to an extended stay on the sidelines for the former Ultimate Fighter contestant.

As frustrating as the time away has been, it has also given Maynard time to get settled in his new surroundings.

He’s training full-time at the American Kickboxing Academy (AKA) in San Jose, alongside the likes of Josh Thomson, Daniel Cormier, and Luke Rockhold, adding to his already impressive repertoire of skills, champing at the bit to get back into the cage and resume his quest for championship gold.

He’ll finally get his chance this weekend when he shares the cage with surging Canadian TJ Grant at UFC 160.

“The last couple camps – Clay Guida, even the Edgar bouts – I was kind of floating, playing around with things. The camp I have now and being with AKA totally is a great team. They put together great plans, and it’s just all MMA. Every area – game plans, standup, takedowns, all over the place – I’ve improved.

“[Javier Mendez] has been pad-holder and coach,” continued Maynard, rhyming off the collection of coaches and training partners that have helped prepare him for his return to action on Saturday. “[Bob Cook] is there all the time, Josh Thomson; we all work together as a team. We tell each other what we’re doing well, and what we’re not doing well. It’s been a great camp. It’s been top notch. I’m pumped about it.”

Though getting the opportunity to once again step into the Octagon was already plenty of motivation for the 12-1-1, 1 NC lightweight, UFC President Dana White upped the ante for his return appearance just a few weeks ago, announcing at the close of the UFC on FOX 7 post-fight press conference that Maynard and Grant would be battling for the opportunity to challenge Benson Henderson for the lightweight title.

It was a declaration that surprised many, but one that makes perfect sense when you sit back and think about it:

Grant is a perfect 4-0 since making the move to the lightweight division, and coming off a brilliant first round knockout win over Matt Wiman in January, and though Maynard has been sidelined and enters off a forgettable split decision victory over Guida, he remains one of the top-ranked fighters in a division suddenly lacking clear cut contenders.

“They kind of hinted to us that it was a #1 contender fight, and really, we’re just pretty much the top two guys. There’s just not a clear person (in the division); it’s just kind of him and me.

“He comes at you,” continued Maynard, offering his assessment of the man he’ll share the cage with this Saturday night at the MGM Grand Garden Arena. “He’s a tough kid, and so it’s going to be a good one to come back to. I’m pumped about it.

“He’s good all around. He believes in his standup. He’s got more of a Thai style, and he’s got a good clinch game. Obviously, he’s good on the ground, and the times he has been beaten, it’s just because the guy came in prepared and knew what they had to do.

“I think he comes in to brawl, and tries to take it to you. That works against some guys, but there are a lot of other guys (where it doesn’t) and you can pick them apart.”

It has been a long time since Maynard made a statement in the cage, and the bitter taste of two championship opportunities gone astray still lingers.

Though the production team will affix a “#3” next to his name in the various graphics packages that accompany a UFC event all week, for Maynard, Saturday’s contest is about reclaiming his place in the division, and reminding everyone that he’s still one of the best in the business in the 155-pound division by making a statement against the dark horse contender from Canada’s East Coast.