Gray Maynard: Back in This Crazy Game 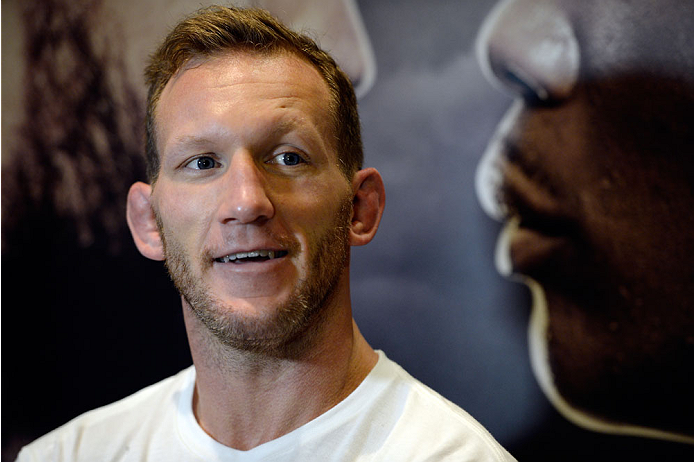 You might say it’s better late than never when it comes to Gray Maynard’s decision to train with the Power MMA team in Arizona for his Saturday bout against Ross Pearson in Bangor, Maine.

Home to this Saturday’s headliner Ryan Bader, as well as middleweight contender CB Dollaway, the Power MMA squad also has someone on board who Maynard has known longer than anyone else there in UFC vet Aaron Simpson.

“Aaron actually was the coach that recruited me in the 12th grade to ASU,” Maynard said.

“He’s still pissed off about it, and he makes me pay every practice,” Maynard laughs. It’s that camaraderie and ribbing that has the two-time lightweight challenger in a good place these days. He even likens it to being back in college, with the only exception that on weekends there are no wild parties, only posting photos of their kids on Instagram. Oh yeah, and more training, which has Maynard eager to get back in the Octagon and erase the memory of his last two bouts, knockout losses to TJ Grant and Nate Diaz.

“There was just a lot going on,” he said, “and it isn’t an excuse, but I was just going out there and going through the motions. If you’re not alert and you’re not on point, that’s how you get caught and get dropped. A loss always hurts, but if it was something where I got beat up for the whole time, then I’d probably have a lot to look at, but the last two were kind of quick and I think it was the mental lapses. It happens. But you can’t have that, especially going up against top ten guys. You’ve got to be on point.”

Maynard wasn’t, and with a lot on his plate in his new home of Santa Cruz, California, he wasn’t the fighter who soared to the top of the 155-pound weight class and nearly unseated then-champion Frankie Edgar in 2011. And when you lose two in a row by knockout, some folks start talking retirement. Maynard wasn’t one of those folks.

“I don’t think it was brought up, but I just kind of knew that it was more of the mental deal than not being able to compete,” he said. “When the camp got brought up (with his fiancé Jess), it was like ‘yeah, Gray, you need to go away.’ I had all this craziness on my plate and she was at that point where she said you need to get back in this. I was always in the gym and then I had all kinds of stuff going on and I couldn’t be in there. It’s just life and you have to adjust.”

So since May, he’s been sweating in the heat of Arizona and rebuilding. He misses Jess and their daughter Estella, but it’s all for a good reason: to regain what he’s lost in the fight game.

“It gives you that drive, like I can’t wait to get home,” Maynard said. “There’s a purpose to everything.”

This Saturday, it’s back to the Octagon for Maynard. He knows that some have written him off after his recent setbacks, but he’s heard that before about another fighter who is currently undergoing a career resurgence – number one welterweight contender Robbie Lawler.

“A lot of people said ‘yeah, he’s kinda done,’ and then he just roared back and did awesome,” Maynard said. “I think it was his new camp (at American Top Team) and the new attitude.”

He chuckles, knowing that he has what it takes to make a similar run. But in this sport, anything can happen.