"I don’t really have too many gears. The only one I know is full throttle." - Chad Griggs 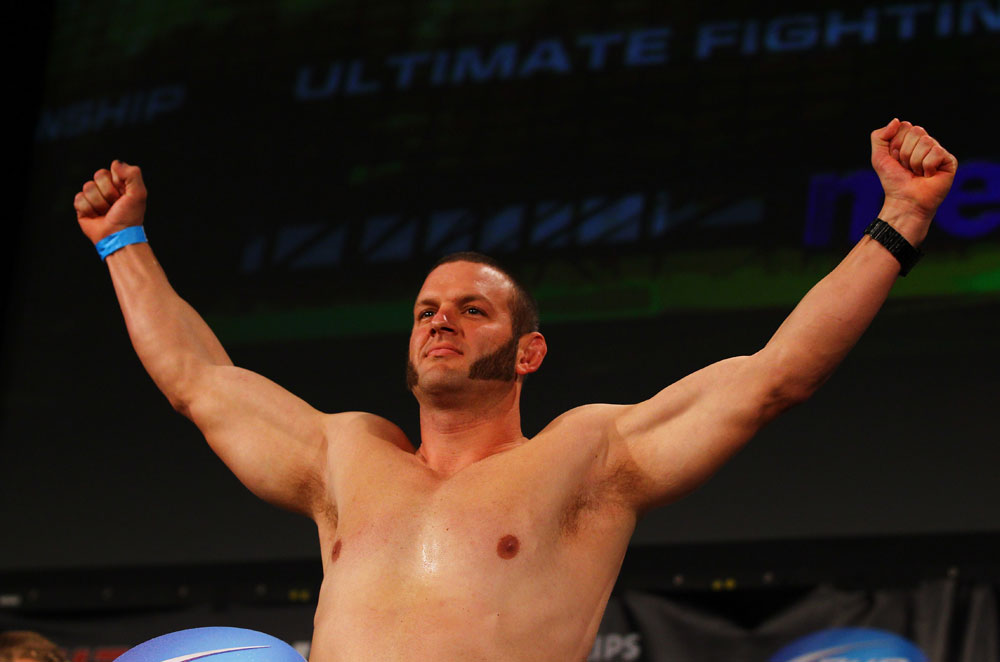 Change is something Chad Griggs has been forced to deal with a lot as of late.

After a successful run in Strikeforce’s heavyweight division, “The Gravedigger” found himself under the UFC banner when Zuffa merged the two organizations’ weight classes. He faced a stiff test in his promotional debut against Travis Browne at UFC 145, and after suffering his first defeat in five years, Griggs knew it was time for another large adjustment.

The Tuscon, Arizona native has faced larger competition throughout his entire career, but with the current trend of heavyweights increasing in size and power, the 34-year-old made the decision to try his hand in a lighter weight class. Dropping down to compete in the light heavyweight division is an idea his camp had kicked around for years, but it took a setback to spark the process into motion.

“It’s absolutely something we have been talking about for the past four or five fights,” Griggs said in regard to his drop down to 205 pounds. “But it was just a matter of not trying to fix something that wasn’t broke. We were having a good run at heavyweight and didn’t figure we should change anything until we lost. The loss came and it was a good time to drop.

“I was slated to fight in August but ended up getting Mrsa. That knocked me out for a while, but I’m back on track. I had a great training camp and my weight is going to be right on target. This is my first fight in the light heavyweight division and I’ve been very cautious with my diet. We’ve done a couple test runs to get down to 205 pounds and get everything dialed in. I feel very good about how things have gone. I’m excited to get into this new division.

“I’m fighting in the UFC, at the top of the food chain, and heavyweights are a new breed of giants. I walk around weighing around 230 pounds and these guys are cutting to make 265. That is a pretty big weight gap. In all reality, 205 is where I probably should have been for quite some time.

When Griggs makes his light heavyweight debut it will come against French striker Cyrille Diabate at UFC 154 in Montreal, Quebec, Canada. It is a classic matchup of contrasting styles, and has the makings for an exciting affair. Where Diabate uses his length, kickboxing, and dangerous Muay Thai skills, Griggs is more inclined to get inside and make things ugly. “The Snake” has struggled in the past when his opposition is able to neutralize the distance, and Griggs has every intention on bringing the fight directly to him.

“I think this is a really good matchup for me,” Griggs said. “Diabate is a solid striker and he is obviously going to have a reach advantage over me. He is 6’6 and lanky. It doesn’t take a scientist to know I can’t stay at his reach because I’ll get picked apart. But that has never been my style to begin with. I’m going forward and looking to push the pace. I’m looking forward to it.

“He uses all his tools, with knees, kicks, and punches. He is a southpaw and I’ve been working a lot on that. It is a lot different than facing someone who fights conventionally. The experience has been very good and I’m excited to fight him. I’m going to be stronger than him, and while he may have the reach advantage, I’ll have the power and dirty boxing style that should take him out of his game.”

After months of adjustments and recovery, Griggs is excited to enter the waters of a new division. Over the past two years, the 205-pound weight class has experienced a return to prominence. In years past, the light heavyweight division has been the organization’s crown jewel. With a dominant champion in superstar Jon Jones, and depth along the divisional ladder, the competition there is fierce.

For Griggs, a fresh start couldn’t come at a more perfect time, and he’s prepared to give everything he has to make a statement in his new weight class.

“I don’t really have too many gears,” Griggs stated. “The only one I know is full throttle. I don’t go into a fight to win on points. I go into finish. I’m definitely going into this throwing leather and I’ll be looking to either submit him or knock him out every round I’m in there. I’m sure he knows that. It has been my style from the very beginning. It should be an exciting fight for the fans and I don’t see this one going the distance. I’ve never been to the judges’ cards and I don’t plan on starting now.

“The Gravedigger is coming back. I’m bringing the sideburns in with me and I’m coming in to throw heavy leather. I’m going to push the pace, get on him, and I’ve always been willing to take a few punches to give a few in return. I’ll trade any day. It’s going to be a fast-paced fight and exciting for the fans.”