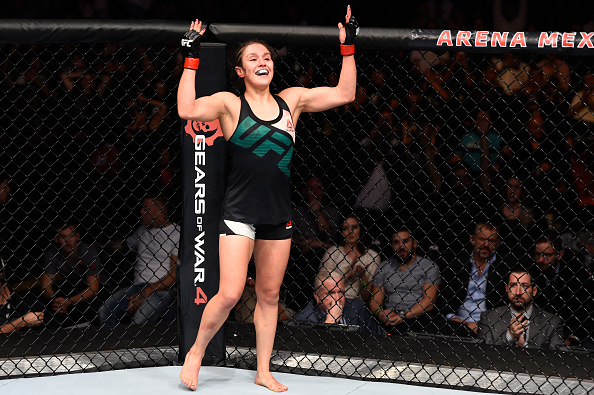 The high altitude of Mexico City was no issue for lightweight veteran Diego Sanchez, who picked up an important win in the UFC Fight Night co-main event at Arena Ciudad de Mexico on Saturday, decisioning highly-regarded newcomer Marcin Held.

Quicker and more accurate with his strikes, Held had an impressive first round. And even when Sanchez sought a late takedown, Held nearly sunk in a guillotine choke, only to see the “Nightmare” escape by jumping off the fence, thrilling the crowd in the process.

Held looked for the leg lock early in round two, but Sanchez defended well and escaped. Held went right back after his opponent’s leg, but the Albuquerque veteran wasn’t playing along, and soon he was in Held’s guard, where he outworked his tiring foe on the mat.

Clearly winded, Held kept searching for submissions in the final round, but none were finding their mark, allowing Sanchez to fire off ground strikes and add points to his tally.

Despite facing an opponent who weighed in nine pounds over the featherweight limit, Chicago’s Ricardo Lamas still came up with a big victory, submitting Sao Paulo’s Charles Oliveira in the second round.

Lamas wasted no time getting the fight to the mat, with a takedown in the opening minute freeing up his ground-and-pound game. Oliveira was able to get back his feet fairly quickly, and the Brazilian scored a takedown of his own before attempting a D’Arce choke. Lamas coolly escaped, but by the end of the round, Oliveira had his back and was in control, nearly submitting Lamas with a choke just before the horn.

The bout went back to the mat in round two, and after some scrambling, Lamas locked in a guillotine choke and that was it for Oliveira, who tapped out at 2:13 of the frame. 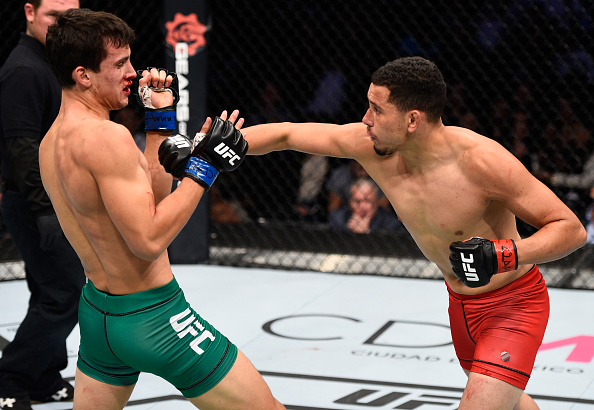 With a left hook to the liver Julio Cesar Chavez would have been proud of, Mexico’s Martin Bravo won season three of The Ultimate Fighter Latin America, stopping fellow lightweight prospect Claudio Puelles in the second round.

Bravo dictated the action for most of the first round, with his accurate and busy striking attack bloodying Puelles’ nose. Some late round showboating from Bravo allowed Puelles to get in enough shots to keep his opponent from running away with the fight, but in the second, Bravo got back to business and he dropped Puelles with a series of body shots. Three ground strikes followed, and referee Keith Peterson stepped in to stop the fight at the 1:55 mark.

The high skill level of both fighters was evident from the start, but Dariush was able to race out to an early lead thanks to his aggressive attack. And while Magomedov waited to counter for much of the first round, a late takedown got the Dagestan native on the board.

Dariush (14-2) quickly regained control in the second, with his clinch work likely earning him another frame on the scorecards, and while Magomedov (19-2) continued to make it close in the final round, he didn’t do enough to pull out the win, which went to Darish by scores of 30-27 twice and 29-28. 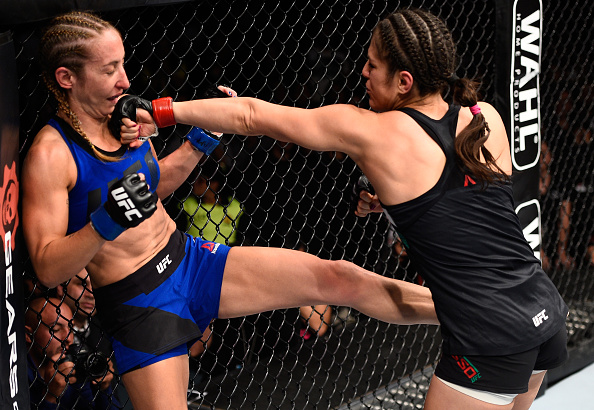 After some fast-paced back and forth action to begin the bout, Grasso (9-0) caught Clark with a kick as the Las Vegan sought a takedown, and as the bout went to the mat, the Guadalajara native fired off strikes. Clark got back to her feet, but Grasso kept the heat on with an array of strikes. Clark fired back, eventually getting out of immediate danger, but Grasso kept her pinned to the fence before she backed up and began firing away at range.

Clark (7-6) was able to get back in the fight in the second, but she was still a step behind the 23-year-old Grasso, who was apparently quite comfortable under the bright lights of the Octagon, and the Mexican phenom continued to impress in the third as she sailed to victory over a tough foe by scores of 30-27 twice and 29-28.