"Just winning the show is not gonna guarantee you success. I have to go out there, work hard, and grab every opportunity I
possibly can." - Davey Grant 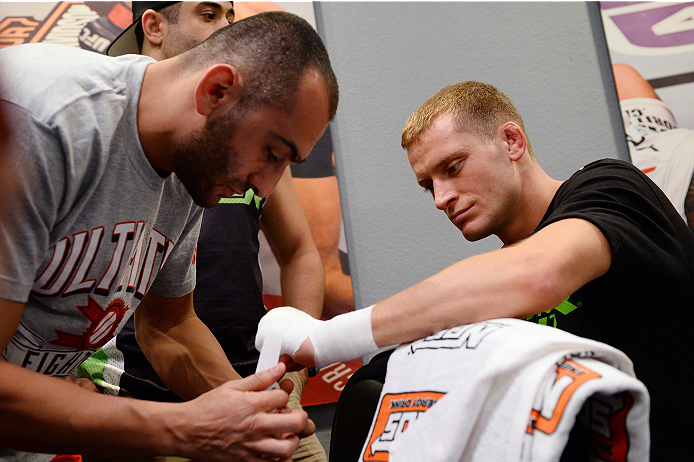 With an 8-1 pro mixed martial arts record in which he finished all eight of his victories, Davey Grant might have already been a fight or two into his UFC career if his address read California, Nevada, or anywhere else in the United States. But when you’re from Bishop Auckland, County Durham in England, the road to the Octagon is a bit rougher.

And in situations like that, the idea of competing on The Ultimate Fighter is not just welcome, but often necessary.

“I know that I needed something like the show and to be honest, it’s always been one of my dreams to get on The Ultimate Fighter,” said Grant, who fights Chris Holdsworth for the season 18 men’s title on Saturday in Las Vegas. “I’ve always thought, I hope to God that I would get that experience of going on there, and not just getting to the UFC, but being on The Ultimate Fighter. I’ve watched it for years and I really wouldn’t have felt complete if I didn’t get on. So as soon as I found out about the tryouts, I went straight over. I wanted people to see that I’m a nice guy, I thought I could make a good show, and show off my fighting skills at the same time. I felt like it was my destiny in life to go on that show.”

Not exactly the reaction you get from those who went through the reality series and thought it was akin to a prison sentence. For Grant, it was an opportunity to not just possibly earn a spot on the UFC roster, but alter his career and life – and the lives of his fiancé and two sons.

“It was a brilliant time,” he said of his time on the show. “At the time it didn’t seem like it because it was really, really hard, but now that it’s all over and done with, I’m so pleased. It was a wonderful experience. I knew what I was doing it for, I knew I was trying to better their lives in the end, and obviously things have worked out really well and I’ve got a chance to really make a difference in their lives from doing the show now.”

Perhaps more than any other season, TUF 18 had several athletes competing that were doing so as fathers and mothers and not just prizefighters. And though it wasn’t easy for any of them to be away from their kids, perhaps it was even tougher for Grant knowing that his sons weren’t a state or two away, but in another country altogether.

“I don’t know how everyone else was feeling, but I know that I felt so far from my family and it was pretty hard,” he said. “I’m sure it was the same for all the people who had children in the house, whether the kids were just up the road or halfway around the world. It was so hard when you’re used to seeing them and talking to them every day. It was torture for all the parents.”

At the moment though, that’s all behind the 27-year-old bantamweight prospect. Sure, he’s on the road again and back in Vegas, but this time it’s with the realization that with one more win, he will join Michael Bisping and Ross Pearson as the only England natives to win TUF. That’s solid company to be in, especially when you look at what both “The Count” and “The Real Deal” have accomplished in the Octagon thus far, even going back to coach TUF following their season’s victories.

“They’re two great role models to look at because they’ve done so well off the show, but obviously just winning the show is not gonna guarantee you success,” said Grant. “I have to go out there, work hard, and grab every opportunity I possibly can.”

It’s the same attitude he took on the show, where he submitted Danny Martinez and Louis Fisette before a forfeit by Anthony Gutierrez punched his ticket to the finals. Following the taping of the series, Grant returned to his family and his NEVT team in England to prepare for the biggest fight of his life.

“I’ve got a good set of lads here and I thought they could really help, especially with the opponent,” said Grant. “I got some good training over here with all the people I know and trust and that have got me this far already. And I thought it was a wise idea for us. To be honest, if I was fighting someone with a different style, maybe a little, stocky wrestler type guy, then I probably would have gone to America to train with more people like that. But for this camp it was a wise idea to stay home.”

Grant has gotten reacquainted with his coach on the show, Ronda Rousey, and teammates Shayna Baszler and Jessamyn Duke in the lead-up to the finale, and with this veritable army assembled to prepare him for battle, the Brit is ready for Holdsworth.

“I think we’ve both got good skills,” he said. “Chris has got some decent hands as well, and he’s not just all about the ground game. He rocked Chris Beal and then submitted him, so it’s not as if he’s just a jiu-jitsu guy. I think we’re both well-rounded and it makes for a great fight.”

One that Grant plans on walking away from with his hand in the air. In fact, it’s all he thinks about.

“I can’t get it out of my head from when I wake up to when I go to sleep,” he laughs. “It’s constantly on my mind, to be honest.”