Grant Out to Prove that He's Ready for Prime Time

"On September 22nd I’m looking to put a big splash on everybody’s radar and let everyone know that I’m here and that I’m a great fighter." - TJ Grant 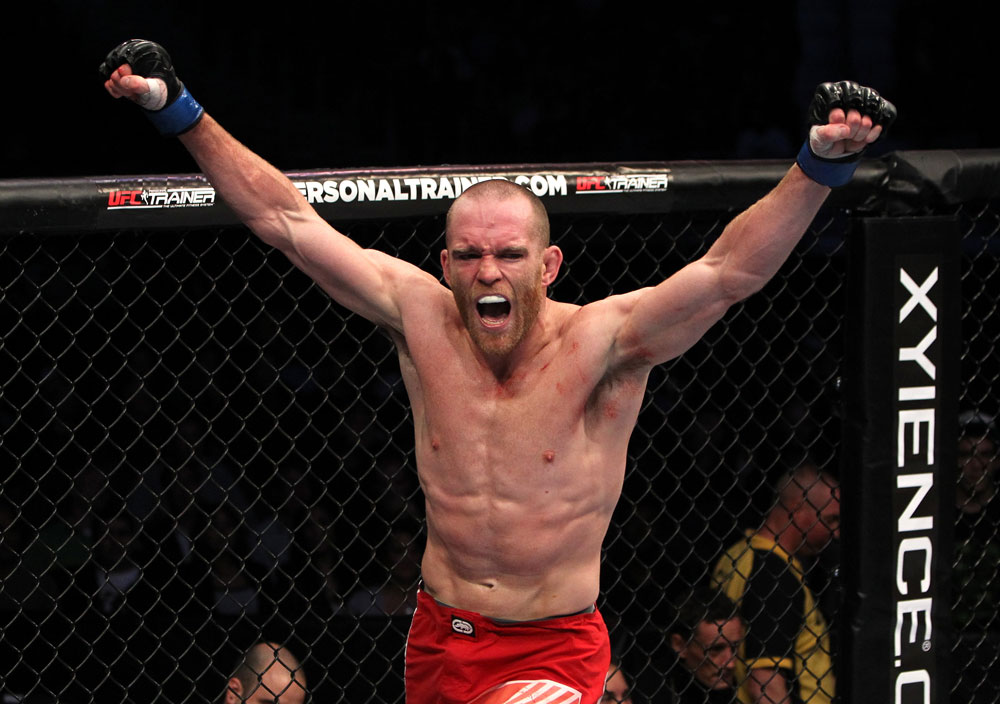 TJ Grant has heard the phrase “the squeaky wheel gets oiled.” His opponent this weekend at UFC 152 in Toronto, Evan Dunham, has probably had it tossed at him a few times over the years. Both aren’t likely to begin trash talking battles or Twitter wars though. And Nova Scotia’s Grant confirms it, at least from his end.

“I’m not a phony, I don’t pretend to be anything I’m not, and I’m not gonna start now,” he said. “I knew that it was going to take hard work (to travel up the UFC ladder) and a lot of ups and downs, but in the end I’m gonna still be standing, and there’s gonna be a lot of guys that are gonna come and go, and they’re gonna be flashes in the pan.”

That’s not a title you can pin on Grant. First, he’s not flashy. But he is talented and he has toiled long and hard in the gym to get to where he’s at. A brown belt in Brazilian Jiu-Jitsu, Grant has been fighting professionally for over six years, with three of those in the UFC. Currently 5-3 in the Octagon, it took a trip south from welterweight to lightweight for him to learn the consistency he needed to break a win-loss-win-loss pattern and begin making moves toward title contention.

“It’s my home now,” said Grant of life at 155 pounds. “You learn as you go along, and that’s just one thing I had to learn. I couldn’t compete at the highest level and do what I needed to do at 170. At 155, the preparation’s so much better, my eating, my conditioning, everything just comes together. Overall, I just feel better as an athlete.”

The 2011 decision did surprise some people, mainly because Grant’s wins over Ryo Chonan, Kevin Burns, and Julio Paulino, and even his majority decision loss to Johny Hendricks showed that he could handle himself with the big boys. But after a December 2010 loss to Ricardo Almeida and a trip to Thailand to train, he decided that he had a better shot at challenging for a title and delivering his best performances at lightweight.

“It took me a while,” said Grant of the decision making process. “And then while I was in Thailand a couple years ago, my weight was just coming down, I wasn’t really lifting, and I cleaned up my diet a bit, so it got to the point where I was flirting with the mid-to-low 170s and I was like ‘you know what, everybody else is doing it; I’m gonna give it a shot,’ and it’s definitely the best decision I’ve made so far. At 155 I feel a hundred percent better.”

So he wasn’t just being a good Canadian, wanting to keep 170-pound boss Georges St-Pierre on top a little longer?

“Yeah, that too,” laughed Grant, whose first two outings in his new weight class saw him submit Shane Roller and decision Carlo Prater. Not a bad start at all.

“I’ve gotten a lot of compliments on my game, just saying I look a hundred percent better when I’m fighting at 155,” he said. “I get to show everything I can do – the wrestling and the jiu-jitsu, and I get to mix it up so much better now that I’m at this weight. A lot of people have told me that I made a good decision and I look good, and to keep it going.”

This Saturday’s bout against Dunham will truly tell the tale though. Once the owner of a four fight winning streak to start his UFC career, Dunham dropped two in a row against Sean Sherk and Melvin Guillard before bouncing back with wins over Shamar Bailey and Nik Lentz. A two fight win streak isn’t the only thing the two share in common; both are well-rounded, aggressive fighters, and firm believers in letting their performances do the talking.

“It’s like looking in the mirror,” said Grant when asked for his assessment of Dunham. “He’s a southpaw, so when you look in the mirror, everything’s flipped. He’s a tough guy, he likes to move forward, he’s got good boxing, and he’s a lot like me. He’s an aggressive fighter, he fights to the end, and he’s always one of those guys I always cheered for when I was at 170, and when I went down to 155, he was a guy I knew that I could be fighting one day soon.”

How soon? How ‘bout Saturday soon? And though neither fighter makes a lot of noise outside the Octagon, they were given a Pay-Per-View at UFC 152; at least until Jon Jones’ light heavyweight title defense was moved to this weekend’s event, pushing them to the preliminary portion of the card.

“There was definitely some disappointment there, and I’d be lying if told you I wasn’t still disappointed, but I got over it pretty quick,” said Grant. “I dwelled on it for a few minutes and then it was history. I’m still fighting in front of millions of people, it’s gonna be a big, big fight on FX and maybe more people are gonna see it than will see the Pay-Per-View. My name is gonna reach the masses and I’m getting to fight an incredible fighter who I think is deserving of a top ten spot. So it’s a great position for me, and I’m not gonna complain. I’ve been in the UFC for eight fights and unfortunately I haven’t been on the main card yet, but at the same time, I’m growing and learning from all my fights, and I’m kinda flying under the radar. So on September 22nd I’m looking to put a big splash on everybody’s radar and let everyone know that I’m here and that I’m a great fighter.”

And hey, what better way is there to do that than with a career-defining performance? Grant is down for that, and he won’t even have to get out of character for it.

“I’m gonna be around for a long time,” he said. “I’m always growing as a fighter and I’ve improved a lot over the last three years since I’ve been in the UFC and I knew going in that maybe it would take a little longer for me, but that’s the way I am. Whether I’m out there to prove that I deserve to be on the main card or not, I’m just out there to beat a man, and the way I know how, and I’m sure it’s the same way he does, is to go in there and fight.”