After experiencing multiple fight cancellations Grant Dawson will fight newcomer Darrick Minner, and he believes he has to show that he is on a different level.
By Zac Pacleb, on Twitter @ZacPacleb • Feb. 27, 2020

Grant Dawson is chomping at the bit.

Originally booked to face Chas Skelly at UFC 246, Dawson and Skelly rebooked their bout for the end of February. Then, a few weeks before fight week arrived, Skelly pulled out, citing a training injury. Dawson, having been in camp since booking the original fight, now had an opponent he hadn’t been thinking about for the last four months, but that wasn’t going to stop him from taking this weekend’s fight against Darrick Minner.

Keeping that same grind isn’t necessarily out of the realm of normalcy for Dawson, who says he trains every day whether he is booked for a fight or not. That said, keeping that same focus over the course of four-plus months on the same individual can have its taxing moments.

Most recently, Dawson took on TUF 27 winner and then-undefeated Michael Trizano in May. In the second round, Dawson sunk in a rear naked choke and cites that fight as the one that solidified his high confidence in himself.

Though it may come off as brash, Dawson’s self-assurance is unwavering because he hasn’t seen any reason not to believe in himself. When it comes to thinking about his opponent, he isn’t fazed by Minner’s record showing nearly 20 more fights than his own.

“He’s got more experience losing,” Dawson continued. “That’s for sure, but other than that, how is that going to help him?” 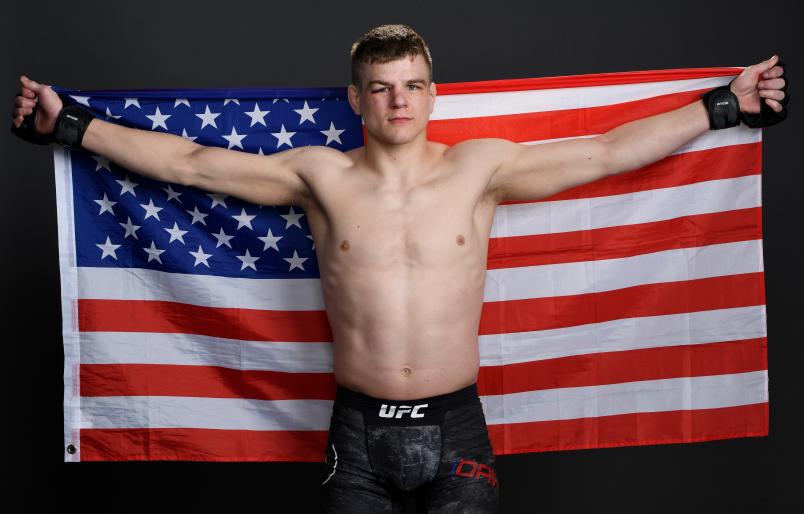 Grant Dawson poses for a portrait backstage after his victory over Michael Trizano during the UFC Fight Night event at Blue Cross Arena on May 18, 2019 in Rochester, New York. (Photo by Mike Roach/Zuffa LLC via Getty Images)

While that sounds like a young fighter looking past a veteran who had to wait for his chance, Dawson is aware of the expectations around the situation.

“I actually think there’s a little bit more nerves behind fighting a guy who’s making his debut,” Dawson said. “I’m supposed to steamroll Darrick Minner. I’m supposed to run through him. I know he’s dangerous for two minutes, so don’t think that I’m not taking him seriously. I’m going to take him very seriously. It is up to me to show everybody why I’m going to be the favorite in this fight.”

It’s that type of measured self-belief, mixed with the obvious talent, that has people excited about what Dawson brings to the featherweight division.

His awareness that he not only has the talent and ability but also a responsibility to those expectations is what he looks to prove true on February 29, and he boiled down that responsibility quite promptly.