UFC Lightweight Grant Dawson Knows Quite A Bit About Controlling In The Cage, and The Two-Time Performance Bonus Winner Guarantees Bo Nickal’s Pro MMA Debut At Ikon FC 3 Is The Beginning Of A Long, Dominant Career.
By Walker Van Wey • May. 30, 2022

At 18-1-1 in one of MMA’s most wrestling-rich divisions, Grant Dawson knows a thing or two about how scary it is having wrestling aces on the roster, and with a couple key things to keep in mind, Bo Nickal is sure to make a tsunami-inducing splash.

A longtime Glory MMA staple, Grant Dawson made a move to American Top Team and has rubbed shoulders with Nickal on numerous occasions. While he’s not a former WEC champion like Mike Brown and he’s not a nearly ten-year UFC veteran like Jorge Masvidal, he is a DWCS season one veteran with one of the most impressive records in the division.

Dawson has shared mats and cards with some of the most notable fighters in Nickal’s division, and will double and triple down on the ceiling he sees for the debuting superstar.

“He’s so good at what he does and there’s not that many high-level wrestlers in that weight, which is great for him because he’s already got sort of one up on everybody,” Dawson said. “He can step back and focus purely on striking and purely on jiu-jitsu because he knows that he’s always got his wrestling.”

“One piece of advice I would give him is to never get away from his wrestling because once you get to a higher-level wrestling in MMA, it is completely different than wrestling in wrestling,” Dawson said. “Understanding how to use his striking to better set up his wrestling and then be able to use his jiu-jitsu and control to get finishes or not get submitted, that’s going to put the rest of the division on notice, and by the time he is ready to step into the UFC, we’re going to see a complete shift in how middleweights prepare for fights.” 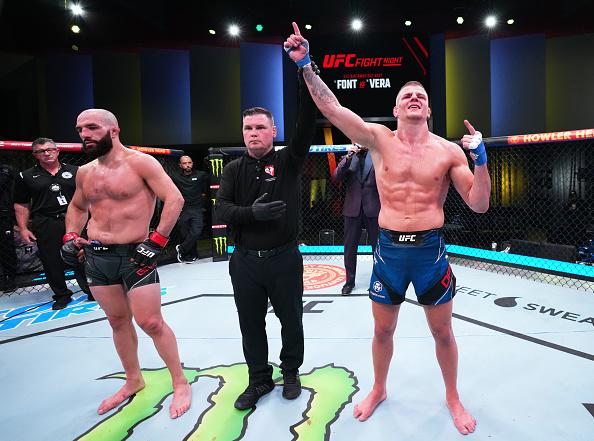 In Nickal’s last amateur outing, he answered early questions about his striking by landing a first-round walk-off knockout.

Dawson has an abundance of faith in Nickal, but cautions against getting too comfortable with his standup game.

“A lot of wrestlers, when they come into the sport, get a knockout and start falling in love with their hands because striking is easier than wrestling,” Dawson said. “It’s more dangerous, but it is easier. Striking doesn’t take as much energy and it doesn’t take as much risk. When a lot of wrestlers realize they’ve got a mean right hand or a mean left hook, they kind of fall in love with that.”

As real as the possibility is for a wrestler to say, “I’m tired of pushing to the brink today, I’m going to take some off the next camp,” Dawson flat out says it’s just not in Nickal’s DNA. The excitement Nickal feels before and during wrestling practice is unmatched.

The pace he puts up on any given night of practice with a smile is enough to even make the most captivating fighters in the world pull up a chair.

“I was training with Jorge Masvidal when he was getting ready for Colby (Covington) and we’re in the middle of our round and he’s like, ‘hold up, hold up, hold up’ and I was like, ‘are you ok?’” Dawson recalls. “Jorge goes, ‘yeah, but Bo Nickal and Johnny Eblen are wrestling. We’re never going to see wrestling at this level for a long time, so I want to watch this.’”

Catch the professional MMA debut of Bo Nickal at iKon FC 3 on June 3, ONLY on UFC FIGHT PASS!