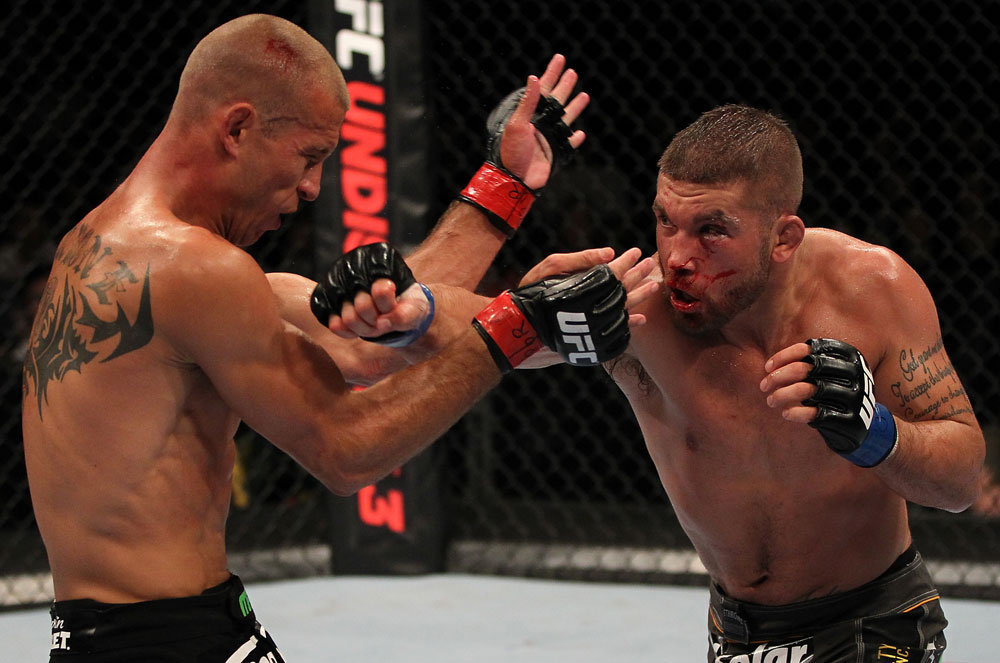 Jeremy Stephens is a success story. Not just in the UFC, where he is preparing to make his 15th Octagon appearance this Friday against Yves Edwards, but in life. Yes, that’s a bold and broad statement to make, but when you look at where the Iowa native has been and where he could have gone, there’s no other conclusion you can make than to say that he made it.

And it was his grandfather who knew it all along.

“He actually got me watching UFC before it all started,” said Stephens of his late grandfather. To this day, the lightweight veteran keeps a picture of the two together, fists raised, on his bedpost.

He did. Blessed with heavy hands and a knockout artist’s mentality, Stephens tore things up on the local Midwest circuit, but as he told me early in his career, he was “crazier and probably prison-bound,” before fighting intervened. And having his grandfather’s blessing only pushed him harder.

“I always excited people with my fights in small town Iowa,” he said. “I always liked to swing for the fences and I had some wrestling skills to go along with it. Growing up, I didn’t think at first that I would make it this far, and it was a long shot of a goal, but as I continued to grow and see people support me and buy my t-shirts and be behind me, I ended up believing in myself and carrying through with what my grandpa first saw and believed in me.”

Years later, he made it. He’s fighting top-level opposition, has carved out a niche for himself in the Octagon, and with a family that includes two daughters, he’s grown up in more ways than one. That’s the good news. But how does a fighter keep that hunger in the gym and the cage when life is going so well outside of it? Stephens doesn’t have to look very hard to find it.

“That’s something I was born with,” he said. “I grew up through some struggles and I kinda like to stay hungry and stay in the struggle. I tell my daughters all the time, not every time when we go to the store can they get something, or get the ice cream that comes by every day, and I swear he comes by on purpose because pretty much half the time we get them some ice cream. (Laughs) But after the fights, I go buy my kids some clothes and I explain to my oldest one that you have to work hard for these types of things, and you have to appreciate it and take care of it. I make sure she takes care of her toys and I try to lead by example. One of the famous quotes by Charles Darwin is that it’s not the strongest guy or the most intelligent guy that’s gonna make it; it’s the person who’s willing to adapt to change that will survive the longest. And I think throughout my life I’ve had to adapt to certain things, whether good or bad, and I’ve always made those changes and I’ve been able to adapt.”

The biggest change for Stephens came four and a half years ago, when he relocated from Des Moines to San Diego, California. Now training with the renowned Alliance MMA team, Stephens didn’t just have to give up Midwest winters for sunny afternoons in southern California.

“I actually kinda miss the snow, believe it or not,” he laughs. “Around Christmas time there’s no snow, and my family, we grew up sled riding and building snowmen and stuff like that. I’ve got my little family now, so it’s a little different, but at least I’m not getting snowed in.”

But in all seriousness, in breaking free of his comfort zone, Stephens took the first step in becoming a better fighter. He jokes about it now, but he’s also not lying when he says “I didn’t really start learning jiu-jitsu until I started realizing I was facing a lot of black belts and top level competition, and I had to go make those changes and start training with better people and getting the right training and focus that I needed.”

He gets it with the Alliance team, home to coach Eric Del Fierro, bantamweight champ Dominck Cruz, and the likes of Phil Davis, Alex Gustafsson, Brandon Vera, Ross Pearson, and Myles Jury.

“We’ve got a ton of guys in that gym, and it’s just iron sharpening iron,” he said. “And I’m willing to make those changes because I don’t just want to be a 15 or 16 time (UFC) veteran. I want a shot at the gold and see how far I can take this, and hopefully I’ll be up there with Randy Couture and Dan Henderson when I’m in my late 30s and early 40s, still putting on a show and delivering knockouts.”

Yet for all the positive news in his life these days, Stephens almost hit rock bottom just days after his May loss to Donald Cerrone. Suffering a broken orbital bone in the first round but still going the full 15 minutes before dropping a unanimous decision, Stephens was told after the fight that there was a chance he would never fight again.

“I just told the doctor that I’m not gonna think like that,” said Stephens, but when he got home, it was time to address the possibility of life after fighting a lot earlier than he ever expected to.

“I got real with my lady and told her that if this is really it for me, I would still like to continue to be a part of the MMA world, teach, and have a school and stuff like that. But I kept optimistic, kept training, kept praying, and just kept my faith. I’m not gonna lie – it bothered me a little bit, but I kept strong, and fortunately everything turned out all right and I feel very blessed to be doing what I’m doing.”

This Friday, clean bill of health in hand, Stephens is back to face Edwards, one of the game’s most respected veterans, and one the “Lil’ Heathen” certainly admires.

“Yves Edwards is somebody I always looked up to and actually watched fight coming up when I was a little kid,” he said. “He’s a pioneer of the sport, and I have nothing but respect for him. I think he’s a great guy, he’s a smart technician, and he comes from that old-school, pioneer era. I feel like I came up with some old-school guys, but I’m a new breed of fighter and I’m training hard and making a lot of changes in my life to make sure that I come out on top in this fight.”

It’s not a bunch of melodrama to say that Jeremy Stephens could have been a statistic, a lost kid scooped up by bad decisions and a bad environment and thrown away. But he’s not. And as much as you can be happy these days, he fits the bill a hundred percent. That’s some good news right there.

“I just really kicked a lot of the negative stuff out of my life,” he said. “I have a very happy family, I have two beautiful daughters, I have a beautiful lady who sticks by me and supports me through everything, and it’s been a great ride. Even the bad things that have happened, I wouldn’t change them because they all set me up for these great moments to come in my life.”

So if you told the 16-year-old Jeremy Stephens what the 26-year-old version would be doing right now, would he have believed it?

“I would have started changing my act by then.”