"We're going to throw at each other and it will be a hell of a fight.
That's what people come to watch: two strikers going at it. It's going
to be something to watch." - Alexander Gustafsson 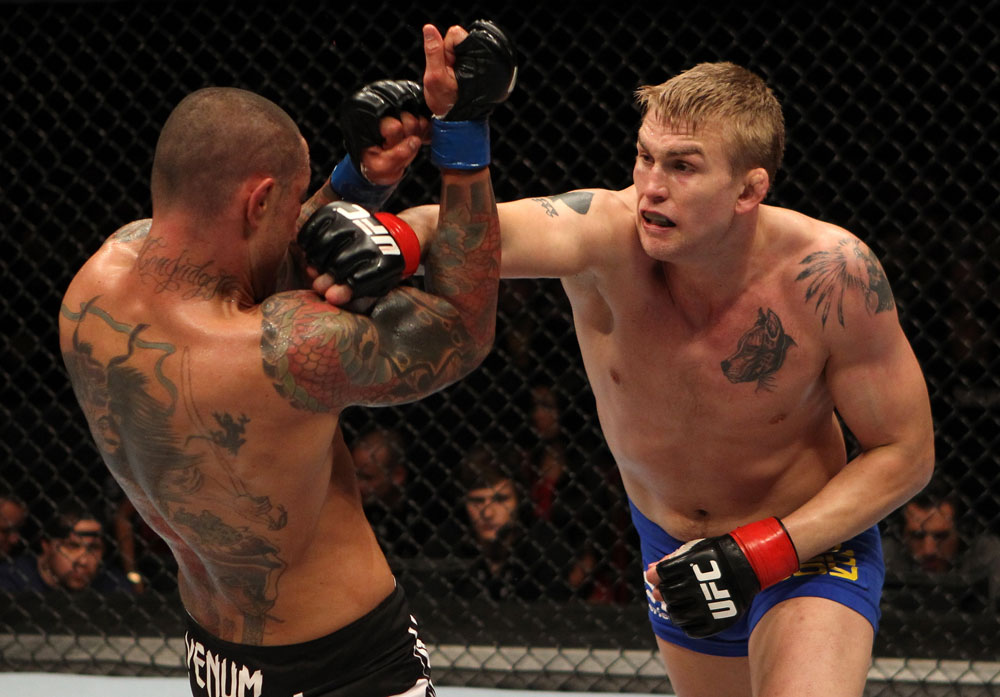 It is the dawn of a new era, a Swedish era in European MMA and, possibly soon enough, the UFC light heavyweight division.

The tip of this blue and yellow spear is the fleet-footed, punishing puncher Alexander Gustafsson. The 6-foot-5, modern-day Nordic Viking has torn through an international onslaught of opposition in his three years inside the Octagon, and following Sweden’s successful indoctrination into the UFC rotation and Gustafsson’s emergence as a main event star, the rising star is standing on the precipice of war with a former champion, Mauricio “Shogun” Rua, where a win could mean a title shot with the current one, Jon Jones. As deftly as he handled Thiago Silva, his foe in Stockholm, Gustafsson looks confidently forward to one day bringing the Octagon’s gold back to “The Old World”.

"For me to fight [Jon Jones], it's a big challenge for me, but I know that I am up there,” asserts Gustafsson. “He's the best in our division right now, but I know I can challenge him, and know that I can really fight him and win against him. I never look past an opponent, so I'm focused on ‘Shogun’, but when I beat ‘Shogun’ I will be more than ready to fight a guy like Jones or whoever has the belt. That's why I'm doing this. That's what wakes me up in the morning to train super hard. That's what motivates me - to one day fight for the belt. When I get the chance, I will make the best of it and be more than ready for it.”

The 25-year-old who grew up less than two hours from Stockholm in Arboga, played the role of host, headliner, and hometown hero in April at the UFC’s first ever event in Sweden. Just three years prior in Stockholm, Gustafsson improved his pro MMA unbeaten streak to eight by winning via first round TKO for the fifth time. Aptly dubbed “The Mauler”, Gustafsson was headed to the major leagues of MMA, the UFC, to realize his competitive dream, but couldn’t have guessed he would be back in his home country so soon as a burgeoning star in the main event of the UFC on FUEL TV card. The pressure of the situation was certainly not lost on Gustafsson prior to the fight, but once the cage door shut, “The Mauler” took over.

“It was nerve wracking,” admits Gustafsson. “I was scared as Hell before this fight about that. Then I went in there and everything went well. It was a really good event. And it was the best thing I've done in my life so far. It was by far the best experience ever and the best feeling ever. Now, I know I can take pressure because I had to and everything went good. It was very good for my career.”

Besides the obvious added media attention and responsibilities that come from being in a headlining bout, multiply that by this marking an entirely new territory for the UFC in which Gustafsson is born, raised, and still trains in. Raise it up a notch further, as this would be the first time he would be in the starring role of an event and it just so happens to be the one in his hometown. With 15,000 countrymen filling the multicolored Ericsson Globe and cheering his name, Gustafsson still had to take to the cage and square off with the Brazilian bomber Silva.

“I knew he was super tough, he had good jiu-jitsu, and was a really heavy-handed striker,” tells Gustafsson. “That was really it. That was what I knew about him. I went in there and it went good. I came in with a bulletproof gameplan and everything went good. My plan was to stay away from his heavy hands and not be in his strength, his gameplan, which was a brawl. Maybe he gets a takedown and gets on top. I didn't want to be in his game, so to speak. I tried to avoid that power. I wanted to move around and pick him apart.”

Like a Swedish Muhammad Ali, Gustafsson floated like a butterfly and stung like a bee early in the first round. “I just threw an uppercut and he went down,” says Gustafsson who dropped Silva, followed him for a frenzied finish, but didn’t get it in the opening stanza. “I should have stayed a little cooler and hit him with my precision instead, and maybe I would have had the finish in the first round. I didn't really think about anything and I just went down and threw a lot of punches (laughs). But everything went well in the end.”

The eventual unanimous decision over Silva takes Gustafsson’s record to an overall 14-1, with a 6-1 record inside the Octagon, which has earned him the co-main event slot against “Shogun”. This Saturday on FOX, the former PRIDE Grand Prix champion and former UFC light heavyweight champion will duel with fists and feet in the cage against Gustafsson. While Gustafsson is riding a five fight winning streak, Rua got back on the victory track with a fourth round TKO of Gustafsson’s teammate Brandon Vera at the previous UFC on FOX event in August. That win improves Rua’s career to 21-6 with an even more impressive and eye-opening 18 stoppages by KO/TKO.

“He's a really tough fighter,” explains Gustafsson. “He's been around, he's with a very good team, and he’s been the champion. He's a tough guy. He's by far the toughest opponent I've fought so far in my career. I better be ready and I better be sharp when I get in there. I'm getting ready for the best ‘Shogun’. I can't wait to fight him. It's an honor to be in the same cage as him. I think it is going to be a striking fight more or less. I would say he’s more of a heavy hitter. He has heavy hands and has more of a brawl style. I think I'm more of a distance fighter. I pick my shots a little bit more and better. We're different types of strikers. We're going to put on a good show.”

While not much can top his last experience inside the Octagon, this will be a surreal scrap for Gustafsson, as he is taking on an opponent he’s been a big fan of since the beginning.

“Just the fact that I am fighting him is unbelievable because I've been watching him since I started doing MMA when he fought in PRIDE and I watched him when he came to the UFC,” says Gustafsson, who is not the first to have delivered such praise of “Shogun,” whose 2003 - 2007 stretch in PRIDE was unquestionably one of the most thrilling this sport has ever seen. “I never believed that I would actually fight him. He's a guy I've been looking up to and looking up to his fighting style because he's aggressive and he likes to give the fans a show and that's what I like to do. Now, I'm fighting him and it's quite unbelievable - actually incredible.”

To prepare for this tumultuous tangle, Gustafsson splits his camp between continents: first in his native Sweden and second in his adopted American address at Alliance MMA in San Diego, California. Either in the Northern lands or on Sunny West coast, his head coach is former boxing coach Andreas Michael, who is in the process of opening his own gym in Stockholm called Allstars. For this particular camp, not only did Gustafsson and Michael travel to Eric Del Fierro’s Alliance, but so did many of Gustafsson’s fellow Swedish fighters.

“Andreas has a great relationship with Eric,” tells Gustafsson. “I always do my final preparations at Alliance. Those two together are a masterpiece. It's such high level coaching it's unbelievable. They help me a lot. All the guys here do. Phil Davis, Brandon Vera, Joey Beltran, Dominick Cruz, Mike Chandler - it's a lot of really top level guys. I have my team from Stockholm out here too. It has been a really great camp and I can't ask for anything more.”

With the combined effort of gyms, coaches, and fighters in “The Old World” and “The New World”, Gustafsson is evolving into one of the top threats in the light heavyweight division. While “The Mauler” works well to put a label on a physically menacing fighter who can quickly overpower and finish a fight, it doesn’t do much to illustrate how thoughtful of Gustafsson is at choosing his means to his opponent’s destruction. Training in boxing since he was 10, Gustafsson doesn’t swing wildly; he strategically lances with jabs, hooks, and uppercuts. For a young fighter, he has shown almost an immediate maturity in and out of the cage, which should mean a long tenure in the UFC and as the leading envoy from Sweden’s growing MMA scene.

“You have to make the right decision and be quick: fast and precise,” affirms Gustafsson. “That's what I'm trying to do all the time. I want to do as much damage as I can without spending too much energy. I always want to be a better fighter for every fight. I look back at my old fights and I shake my head like I can't believe I can't did that. I always try to fix my mistakes and my holes in my game. That is what is preparing me for this fight. My overall game will be better. I will be a better striker, a better grappler, a better wrestler, a better kickboxer. I will be a better fighter in every situation.”

This Saturday, a fan-friendly, stand-up showdown will take center stage between “The Mauler” and “Shogun”. “It's going to be a striker vs. a striker - a war in the cage,” states Gustafsson, who knows he can handle the pressure when the brightest of lights are on him, and with a win he will welcome much more of it. “We're going to throw at each other and it will be a hell of a fight. That's what people come to watch: two strikers going at it. It's going to be something to watch.”