Read on for results of the preliminary bouts at Strikeforce: Marquardt vs. Saffiedine

Oklahoma City's Chesapeake Energy Arena played host to the Strikeforce promotion's swan song, an event rich with MMA bold names, as evidenced by a pedigreed undercard boasting names such as Gracie, Kennedy and Couture. Over the course of six fights, fans saw finishes, grinding wins, adrenaline-inducing wars -- in other words, the best of MMA.

KJ Noons vs. Ryan Couture
In the featured prelim on Showtime Extreme, a lightweight battle between Ryan Couture's kicks and KJ Noons' boxing gave fans a three-round, bloody thriller that included an accidental headbutt and a knee to a grounded opponent (both unnoticed by referee Don Turnage) and ended with Couture eking out a split decision win.

Over three fast-paced rounds, Couture kept his distance, lunging in with an array of flying knees, spinning back fists, switch kicks and high kicks. Noons used the exchanges to land effective counters and send Couture off balance, while Couture scored style points with flashy moves -- in particular, a huge spinning-back kick to Noons' torso to end (and perhaps steal) the first round.

The crowd was on its feet at the end of the second, after a frenzied exchange in which Noons -- bloodied from an accidental headbutt -- clearly rocked Couture. As he chased Couture down and teed off, the end seemed near, but Couture managed to escape, landing a knee as he moved away from the cage. Although Couture was still wobbly on his feet, the knee seemed to have had an effect on Noons, and the two returned to their previous game plans.

Noons spent much of the fight with his hands down, head virtually still, and when he paid for that a few times at the end of Couture's fists, he seemed to wake up and mount offense. But his compusure never wavered, as Noons generally took the center of the cage, ducking away from Couture's approaches, cutting him off with nasty counters. His arsenal of jabs, uppercuts and hooks found their marks, but were perhaps not diverse enough in the face of Couture's flying Muay Thai moves, warrior chin and takedown attempt.

Scores for Couture were 29-28, 29-28 and 27-30, who takes home his sixth win (to one loss), all of them coming under the Strikeforce banner. Noons slides to 10-5. "I’m very happy to get the win I have all the respect in the world for KJ," said Couture. "He did a great job of keeping me in the clinch. I landed some good shots and I was coming forward. I think that’s why it went my way but it was a close fight 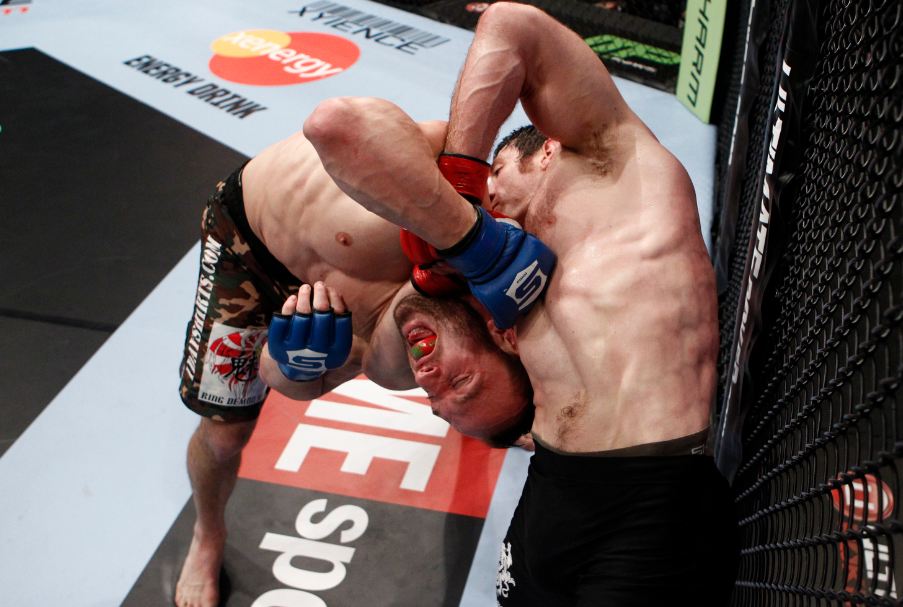 After losing his July title bout to Luke Rockhold, middleweight Tim Kennedy rebounded with a win over Trevor "Hot Sauce" Smith. Though Smith started out strong, Kennedy's endurance and intelligence paid off in a third-round submission.

Though Kennedy had more success on the feet, particularly from the clinch, and reddened Smith's face with blows, the story of round one was Smith's relentless, powerful takedowns. The second started much the same, until Kennedy found a way to use scramblesr to his advantage. As Kennedy got used to Smith's single-leg attacks, he began to counter them by sprawling into top position and inflicting damage in the form of elbows and strikes to the torso and hammerfists to the head. After the action slowed, a referee standup put the men back on their feet, but Kennedy was again able to score top position when Smith shot in.

Smith appeared tired at the top of the third, and Kennedy capitalized during an early takedown attempt. As Smith went for a single-leg, Kennedy snuck in a standing guillotine, then dropped to the mat, getting a leg hook as Smith tried to roll, drawing the tap at 1:36. "There are places in between those specific chokes that aren’t really a guillotine or a brabo or an anaconda," explained Kennedy. "They are hybrid chokes that are still very effective. The stuff that happens at Jackson’s can’t be duplicated. Being surrounded by the best guys in the world causes performances like those."

Kennedy now stands at 15-4 with six wins inside the Strikeforce cage; the loss moves Smith to a record of 10-3.

Pat Healy vs. Kurt Holobaugh
One of Strikeforce lightweight contender Pat Healy's biggest challenges leading up to this event was finding an uninjured opponent, and one finally came through less than ten days ago in the form of undefeated Louisianan Kurt Holobaugh. Although Holobaugh's conditioning, skills and heart proved enough to weather Healy's oppressive offense, they couldn't overcome it and he dropped the bout over three scrappy rounds.

Holobaugh opened with crisp punches and agile head movement, briefly keeping Healy at bay and rocking him at least once. But Healy soon tied up and got a takedown, using his grinding style to control where the rest of the round -- and much of the fight -- took place. Healy worked his way through a series of dominant positions and submission attempts. Though Holobaugh threatened with a toehold at one point, he ultimately couldn't escape Healy's pressure and the round ended with Healy working for a standing rear-naked.

Holobaugh worked to keep his distance early, but Healy quickly took him down. Holobaugh sprawled on top, but Healy quickly spun to top position, then moved around 360 degrees into mount and took Holobaugh's back as his opponent rolled away. Holobaugh tried to shake Healy off the top, but it took a while with Healy's hooks in, and even when it worked, Healy positioned for a heel hook. Holobaugh escaped, but Healy didn't give up, dragging him back to the mat. From guard he worked into a north-south position where he simultaneously worked for an inverted triangle on Holobaugh's head and arm while trying to secure a keylock on Holobaugh's free arm. Again Holobaugh squirmed out, but still finished the round on his back.

The third was more of the same, with Holobaugh coming out more aggressively this time with big hooks before winding up on his back. Holobaugh made a valiant attempt at an armbar, but even that was eclipsed by an incredibly tight arm-triangle choke Healy briefly secured from half guard, and his twister attempt at the end of the fight.

Roger Gracie vs. Anthony Smith
Twenty-four-year old Anthony “Lionheart” Smith showed a ton of heart in taking on Roger Gracie in the night’s first televised prelim, broadcast on Showtime Extreme, but the famed Gracie pedigree proved too much for the young fighter to overcome. After owning the first round of the middleweight meeting on the feet, Smith was taken to the mat and tapped out in the second.

The 6’2” Smith crouched low in his starting stance, circling the even taller Gracie (6’4 ½”) and dipping in with leg kicks and body shots. Gracie attempted an early single-leg takedown, but Smith managed to spin out of danger. Though the pace was measured, Smith had success throughout the round with left straights that connected and leg kicks clearly starting to wear on Gracie. Besides the takedown attempt, Gracie’s offense in the round amounted to an accidental eye poke that briefly halted the action and a series of left jabs in the final 15 seconds.

In the second, Smith continued his use of low punches, striking Gracie in the body and even leg, but now Gracie was more confident on the feet, firing back with jabs and straights. One of those seemed to graze Smith’s eye, as he began pawing at it, clearly affected. Gracie used the opening to initiate a clinch, from which he threw knees before dropping for a double-leg. On the ground, the action was textbook Gracie – the Brazilian deftly postured up to break Smith’s guard, then passed into side control. Though Smith clung tight to try and control Gracie, Gracie used the proximity to smother Smith, passing next into a heavy mount and throwing a heavy elbow that opened a cut on Smith’s forehead before locking in an arm-triangle choke that drew a tap at 3:16.

The decision was read with Smith still being tended to by doctors, with Gracie’s victory marking the sixth of his career and his fourth in Strikeforce (to one career loss). “Lionheart” departed the hexagon 17-8. After the fight, Gracie explained his early reticence to engage as strategy: “In the first round I was just trying to feel out his striking. I was able to hurt him with a jab and I had an opportunity to go for his legs. Once he was down I knew he was just hanging for his life so I waited and opened his guard. "

Martins swung the momentum in his direction early, dropping Gurgel and nearly finishing him with ground-and-pound. Gurgel managed to keep his composure, recovering enough to land a capoeira-style head kick on his opponent. But the rally was short-lived, as Martins again dropped Gurgel with a punch, then managed to neutralized him for the rest of the round against the fence.

In round two, although the pace was slower, the advantage remained Martins’. He forced Gurgel to the fence with a flurry, and seemed to rock him multiple times with uppercuts. Gurgel’s most solid offense came in the form of leg kicks, although many were checked or miss their mark. After more of the same to start round three, second-degree black belt Gurgel tried to return to his bread and butter, attempting to pull guard. But Martins remained on his feet, kicking Gurgel’s legs for the trouble, until the referee stood them up. Martins continued to stalk Gurgel, stunning him with a flying knee toward the end of the round.

Judges gave Martins the bout with scores of 30-27 and 29-28 twice, with two judges giving Gurgel the close second round. The win moves the Manaus, Amazonas native to a record of 24-6, while Gurgel slides to 17-9. "I’m very happy with this victory," said Martins. "It meant everything to come in here and prove what I can do. I have been working very hard on my striking and we knew coming into this fight that we would be able to outstrike him on the feet. After the knockdown in the first round I tried to keep composure and continue implementing the game plan."

Estevan Payan vs. Michael Bravo
Mike “Manos De Piedra” Bravo’s nickname may allude to his hands of stone, but it was Estevan “El Terrible” who brought the finishing fuerza inside of two rounds in the night’s first fight.

The lightweights started slowly, feeling one another out with exchanges of punches and leg kicks. The most notable quality of stanza one was Payan’s pace, as he turned up the aggression as the round ticked on. In round two, Arizona Combat Sports product Payan turned up the striking that showed his Trevor Lally training. After staking out the center of the cage, Payan dropped Bravo twice with punches. Though Bravo recovered, another onslaught from Payan put Bravo out on his feet, with referee Mark Carter waving things off at 4:01 of the round.

“He didn’t really want to engage and was throwing his hands awkwardly and wild,” said Payan, whose win was his second in two Strikeforce outings and bumped his record to 13-4. “I knew he was going to get knocked out -- it was just a matter of time.” Bravo, who trains in Sacramento with Team Alpha Male, sees his record slip to 7-4 after his Strikeforce debut.