“I see Madison Square Garden almost every day of my life,” said UFC lightweight Jared Gordon. It’s part of the ritual that takes him from his home in Queens to Manhattan, where he puts in the work at the Renzo Gracie Academy and Church Street Boxing to prepare for his Sunday bout with Diego Ferreira.

That fight will take place in Austin, but one day the 29-year-old hopes he will be gracing “The Mecca,” a place that holds a little extra meaning to him since his grandfather, Sal Ferello, fought there.

Long before mixed martial arts announced its worldwide arrival, boxing was the be-all end-all in combat sports, and Ferello was a quality featherweight in the late-40s, compiling a 38-3-1 record that probably would have earned him a few titles these days. Back then, though, with just eight weight classes and one champion, Ferello had to be content with battling it out throughout the New York area, from Jerome Stadium and St. Nicholas Arena to even the Garden, where he fought three times, including on the undercard of the October 1950 bout between Rocky Graziano and Tony Janiro. 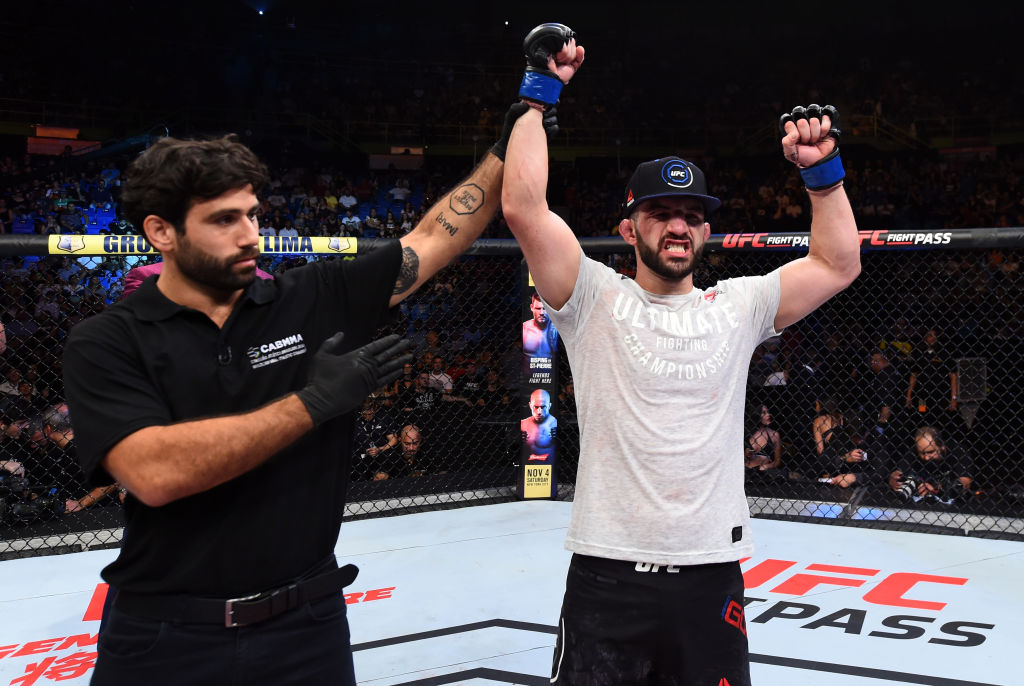 Ferello, whose career was interrupted by an eight-year stint in a Michigan prison for his role in what was then the biggest heroin bust in Detroit, passed away before his grandson got to know him, but that hasn’t stopped the lightweight prospect from digging for any information he can get.

“My mom talks about him all the time,” said Gordon. “He was a really good man.”

Oddly enough, though, boxing wasn’t the path Gordon took, as jiu-jitsu grabbed a hold of him in his late-teens and never let go.

“I fell in love with jiu-jitsu,” he said. “I was 17 at the time and I fell in love with fighting on the ground. Four months after I started to train, I had my first amateur fight, and I just stuck with it and became an MMA fighter.”

And took his own path to following in his grandfather’s fighting footsteps.

Between then and now, Gordon had a well-documented battle with drug addiction, and it’s become as much a part of his story as what he does on fight night. That can be draining to relive as he moves forward, but he does it, not for himself, but for those fighting that same fight.

“My whole reason is to tell my story so I can help other people,” he said. “It’s the only way for me to show everyone that there is a way out. That’s the way it has to be.”

As he says this, just before leaving on his business trip to Texas, Gordon is sitting with his mother, confirming info on his grandfather and just having the kind of pleasant visit that wasn’t possible a few years ago. That’s not lost on Gordon.

“That’s the stuff that means the most to me now, being able to enjoy things like this,” he said. “When I was getting high and being a criminal, I didn’t care about anything like that. I didn’t want to be around my family at holidays, birthday parties, stuff like that. All I cared about was myself and how I was gonna get to the next one. Now I can sit back and look at it all and be able to enjoy life.”

That doesn’t mean he forgets who that version of Jared Gordon was. He can’t.

“I can’t forget who he was; otherwise I could end up back there,” he said. “I don’t know how I could have got to that point, but I did. It seems like that was so far away now.”

It is, and now the focus isn’t on the next fix, but on the next fight, and on getting to a world championship. A UFC title is something that Long Islanders and upstate New Yorkers have earned, but a kid from the city has never won gold in the Octagon. Gordon, already 2-0 in the UFC, plans on changing that.

“It is perfect timing for me,” he said. “I’m gonna put New York on my shoulders and I’m gonna represent us proudly and I’m gonna make a lot of noise in the UFC.